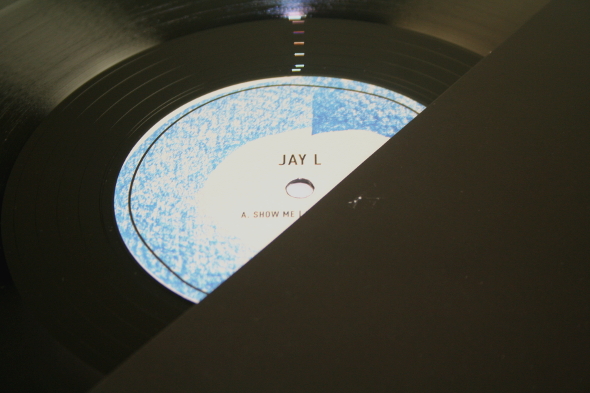 Since 2008, Jay L has been running Bristol’s Falling Up basement parties along with Andy Mac and Typesun – also superb producers nowadays – bringing sublime broken beat and deep house names to the city. All three have absorbed the great music they’ve pushed and after years on the DJ circuit they’ve slowly started to emerge as distinct, understated producers full of integrity. Jay L’s been in no hurry to get music out there either. I reviewed Jay’s first record back in 2012 for Little White Earbuds, and until now there’s only been 2014’s bumpy foot-stepper “Together” to break the silence.

There’s a delicacy to the B-side’s “Blue Age” that makes listening to it a gentle pleasure, the nostalgic mood encouraging something between a smile and a frown. A deft array of dulled minor chords and filtered synths seep into the rhythm; on the whole unfolding carefully, reminiscent of beatific ‘80s jams like Maze & Frankie Beverley’s “Twilight”. Gulps of bass pull at the warm, steady kick and skipping snares, as if attached together but weighted unevenly.

Close to the mellowest moods of Detroit house, sure, but there’s perhaps more in common with Maurice Fulton’s spacey, emotive journeys like his remix of his own Ladyvipb production “A New Day.” The jazz-meets-techno lineage of Detroit – Ricardo Miranda comes to mind – really, though, comes out most on the A-side.

Subtle Latin vibes are submerged into the deep house bump on “Show Me”. After the seemingly fully formed track is introduced, Jay L slides in a half-stepped, Eglo-esque break, before the track’s initial flow comes back somewhat altered, in mood at least, with detuning and filter-squeezes bringing a bright loop down to somewhere darker, coolly evoking the deeply-burned stomp of classic Kerri Chandler joints.