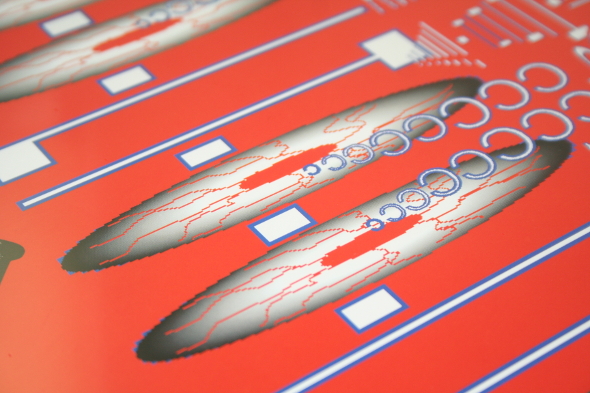 In an interview for French site hartzine last year, Maoupa Mazzocchetti declared all he wanted to do is play with drum machines and with chance. He talked of the liberating feel of working alone, when “mistakes only become mistakes the moment you decide they are”. It’s a satisfying reformulation of the meaning of proper experimentation: in the end, to refuse the notion of ‘mistake’ is to refuse the notion of a particular direction. Nestled deep in this refreshing love for dadaist procedures, Maoupa Mazzocchetti is becoming odder now, and more intriguing, and I wonder if his debut album marks some kind of turning point? The ripening of the route he began travelling since starting to make solo work for Unknown Precept, Mannequin and PRR! PRR!. 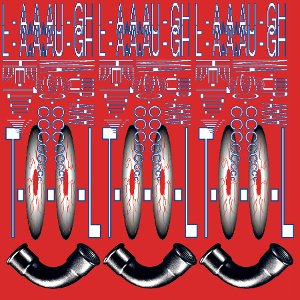 While his past efforts seemed to still be serving some kind of atmospheric, if not exactly sonic, agenda, here it seems like Mazzocchetti more or less completely runs with the heady process of throwing the dice and getting utterly carried away. The results on Laugh Tool make for a complex, hyperactive record where the game changes at every track. Still producing what can be largely categorised under Unknown Precept’s nomenclature of ‘grotesk techno’, Maoupa Mazzocchetti’s first album made in the blackened and uncompromising cradle of Mannequin takes the idea of dark techno and runs it through a grinder.

Unhinged but not aggressive, Laugh Tool is disorientating if you take it darkly and playful if you take it lightly, always wedded to a kind of madness which is as unsettling as it is nonsensical (what does ‘laugh tool’ even mean?!). Yes Mazzocchetti remains a slave to the rhythm first and foremost, but there’s something new here in how he treats the plasticity of sounds: thicknesses, resonances, spikes, textures, it’s all even less orderly than it used to be.

Side A is dominated by the hammer, offering complicated scaffoldings of vertical pulses, each element with its own textural dimension, and all very dry. Crunches, creeks, scratches, opaque tunnels of reverb where sounds seem to go and disappear without sparkle, without humidity. The diamonds are probably “Unsequenced Hours,” a crispy deconstruction of the EBM canon executed with great neurosis but also with great humour, and the opener “Walloon Smokers,” which could be taken as some sort of manifesto of Mazzocchetti’s oblique aesthetics. Swerving and unnerving, rough tape loops repeatedly smash and veer off to the side. Everything is very agitated and fast: you buy the idea that nothing must – ever – settle.

The second side is more reminiscent of Mazzocchetti’s earlier production in terms of its investment in a certain darkness. The consummately outlandish “I’ll Have the Meat but not the Teeth” and “Pale Social Dimension” are twisted 21st century noir dystopias, where a ruthless techno sensibility dirties its hands with the nightmares of the gothier side of the industrial tradition. Bleak tonal progressions serve complicated beats and obsessively sequenced washes: knives fly round the room that dilates and shrinks, you eventually feel yourself being sucked in by the power socket. The album closes on “Car Clock,” also a special track not least because of its impossible but seductive irregularity – you know you can’t keep up with Mazzocchetti, but you follow him to the end somehow, in the dark, in his syncopated journeys.

Similarly to Beau Wanzer’s recent exploits, the sicker ranks of the home-made tape tradition loom over Laugh Tool, but they do so without obfuscating an ultimately contemporary gaze. Records like this seem to not only be freeing us from the question of what techno may or might not be, but also from the constraints of the archive. After so many years of ‘influences’ we might be finally reaching a point of organic and magnificently perverse sense of everything coming together, the end of history maybe (again!). These are thrilling times of maniacal music, and Mazzocchetti has made a very thrilling, and maniacal, record of our time.