The Cherrystones-approved psych-rock from 1975 will appear on 7” in February.

It’s still very much early days for Touch Sensitive Records, the Belfast-based label that started out with David Holmes’ ’71 (Original Soundtrack) album before moving on to an excellent collection of obscure new wave and post punk compiled by Cherrystones. Considering that The Host’s dreamy electronica and Documenta’s Drone Pop #1 have equally popped up on the fledgling imprint, it’s obvious that those at the controls of the label are exercising plenty of creative freedom when it comes to their release schedule. As legend would have it, their latest offering was the result of an impassioned late night phone call from Cherrystones insisting, “Phone me! I’ve got something killer! It might not make sense at first but it’ll suck you in…”

The scoop turned out to be a never-made-it group from Cincinnati, Ohio, called Maya. Their sole two-track 45 release has only been known to a very limited few until now, making it a prime candidate for new found recognition that befalls many similar obscurities in this golden age of reissues. With its early US punk backbone offset by some truly far-out effects madness, it’s a record that brims with visionary psych while retaining a rock-solid groove. This carefully considered reissue has been fully remastered and comes with additional notes from the fantastically-monikered Burk Skyhorse Price from the band itself. Give “Synthezoid Heartbreak” a spin below and keep your eyes open for the release next month.

Touch Sensitive will release Synthezoid Heartbreak by Maya on February 26. 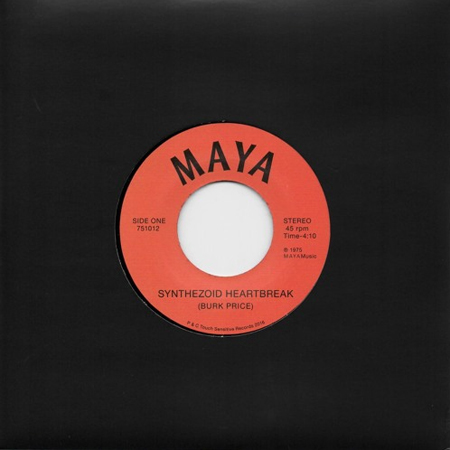 A1. Synthezoid Heartbreak
B1. Distant Visions