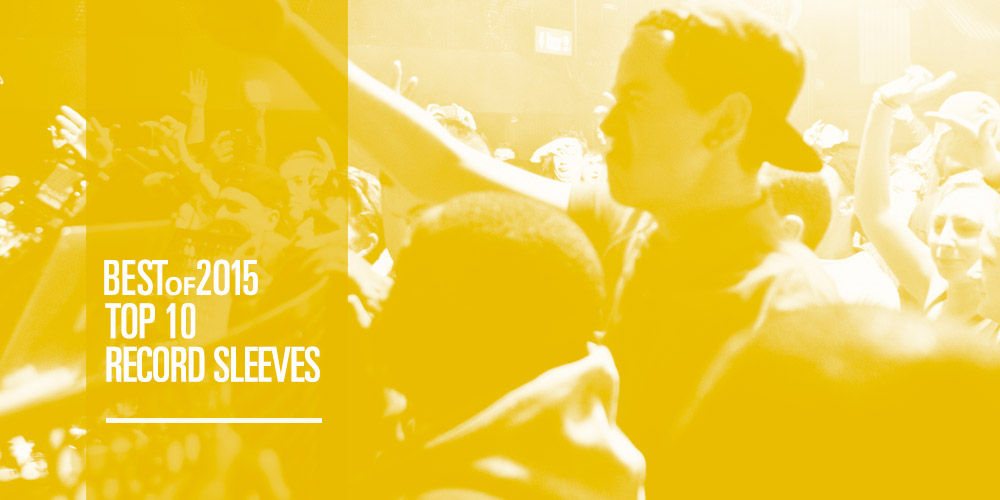 A year’s worth of superb design is whittled down as we select the 10 best record sleeves of 2015.

The Best Record Sleeve column has been running on Juno Plus for four years now, evidence enough the alluring art of a finely presented 12” or LP remains as enduring as ever. Given that the monthly feature has featured at least five records each edition, there is plenty of scope to run wild and count out the top 50 record sleeves of the year. However after taking the sanity of our writing team into consideration, as well as the attention span of readers, it was decided to restrict the selection process to just the 10 possible candidates.

Given his role overseeing the Best Record Sleeve column, it felt only right to give editor Tony Poland the responsibility of choosing what those 10 records should be with one chosen from each of the previous month’s editions. There is no particular order of merit however, each record should be considered special for its own particular reasons.

A few years ago there was a very public difference of opinion between ourselves and FXHE boss Omar S regarding the value of artwork, and indeed the Detroit label’s charm has partly been down to the DIY approach to design. However, there has been a discernible change in the aesthetic side of FXHE this year, with full colour sleeves that still retain the label’s sense of humour; see Brian Kage’s recent 12” A White Bear’s Heaven Is A Black Bear’s Hell. Omar S himself scored the first truly memorable record sleeve of the year with I Wanna Know, a fine homage to André Cymone’s 1982 album Livin’ in the New Wave.

The vinyl edition of Raica album Dose made the transfer from tape back in February with the startling original cover illustration thankfully intact. Designed by Raica artist and Further co-founder Chloe Harris, the vividly assembled figure – likened to “a leather clad strutting peacock” at the time – made for one of the most immediately recognisable album covers this year. When it was included in the February column, the suggestion was made it would be a candidate for inclusion here, and true to form Dose was one of the first albums considered for this EOY list.

In addition to his music endeavours as Fyoelk and Laser Poodle, German artist Cosmo Knex has played an integral role in the visual development of Rush Hour Distribution’s No ‘Label’ series. His most impressive commission to date for the Amsterdam label was undoubtedly for the Shplitting The Shtones mini-album by Dublin pairing Morgan Buckley and Olmo Devin. Expanding on the colourful approach of his previous work on No ‘Label,’ Knex also managed to successfully channel the strange psychedelia of Buckley and Devin’s music in a visual manner that left us truly impressed.

When the topic of this list was raised in the meetings deciding the end of year candidates, the one sleeve that was immediately raised was Royal T’s Shotta 12” on Butterz. One glance at the artwork is all you’ll need to understand why. Elijah and Skilliam’s label have developed a knack for some eye-catching artwork of late, expanding their remit beyond playing with their logo to take in some striking imagery such as the t q d 12” Night & Day. It was, however, the Shotta 12” that stood out thanks to James Gould’s covering photography which captured the energy and intensity associated with Butterz nights, gun fingers and all.

The arrival of Deadboy on Tom Lea’s Local Action label was seen as something of a landmark, and they really went to town on the artwork for the White Magick 12”. Central to its appeal was that cover illustration from Michael Dixon which conjured up pleasant memories of PS2 era fantasy video games. This sleekly rendered imagery was complemented by design from Bristol’s Devilmode, the visual agency operated by Crazylegs co-founder Andy Musgrave who has contributed to the Local Action cause several times.

Although it undoubtedly appealed to fans of the clutch of labels orbiting the Acido-Sued-Sex Tags axis, the Busen album issued through Atelier offshoot General Elektro is probably too obscure to feature in many end of year lists. This is a shame as Daniel Pflumm and his Sex Tags affiliated studio partner in Busen crafted an album of fizzing electronic experimentation that paid homage to their forebearers whilst sounding most contemporary. We can at least highlight the wonderfully clean design that featured on the Busen album with vibrant citric tones complemented by bold fonts and odd model-kit illustrations.

It wouldn’t feel like a best record sleeve of year list without some words of praise directed at Will Bankhead, be it his artistic direction for Honest Jon’s, Berceuse Heroique and others or the wilfully strange and wonderful imagery that adorn releases on his own label The Trilogy Tapes. Of the 11 records Bankhead issued this year through The Trilogy Tapes, the one 12” that really stands out now is undoubtedly EMG & Batista’s Bridge. Indeed the front cover illustration was my work computer wallpaper for the majority of the year, which proves beyond doubt how much I enjoyed gaping at it!

Despite working largely within the constraints of a monochrome palette, UAE label Bedouin Records has delivered a consistently high standard of sleeve design in the two years it has been active. Featuring regularly in this column, the one Bedouin record that really stood out was the Keep Your Mind Open 12″ by Hieroglyphic Being & The Truth Theory Trio. Writing this column introduces you to the work of a lot of artists, and this record brought Cleon Peterson’s work into my life. Keep Your Mind Open featured an illustration by Peterson that expanded on his striking, war-themed Practice Of Masters series that immediately captures your attention.

The year’s most ingenious sleeve design was undoubtedly Peak Oil’s work for the self-titled album from Florin Büchel newly anointed Operation Midnight Climax. Conjuring up unique and individual record sleeves seems integral to the Los Angeles label’s whole approach, with Peter Burr & Laura Brothers lenticular artwork for last year’s Naked Island LP a towering example. Still, Peak Oil outdid themselves with the sleeve design for Operation Midnight Climax, a blotting pad of Peak Oil logos overlaid with a comic figure straight out of the Marvel universe. This along with the insert doubling up as a document featuring redactions from imaginary experiments fed into the themes of Büchel’s music regarding the CIA’s shadowy experiments with LSD during the Cold War.

Our final choice lands on Nous Disques, the label born in Athens, but now run from Berlin by George Mavrikos. 2015 saw Simeon Nomidis further develop a clear visual identity for Nous over the course of the label’s releases from Call Super, O. Xander, Karen Gwyer, and YPY. Toying with different geometric patterns for each record, Nomidis has a clear talent for design with the capacity to play tricks on the eye. Of the four records it was the YPY 12” that looked and felt like Nomidis’ best work to date for Nous and fully deserving of its place here.