One Night In The Schlachthof: Meakusma in Eupen 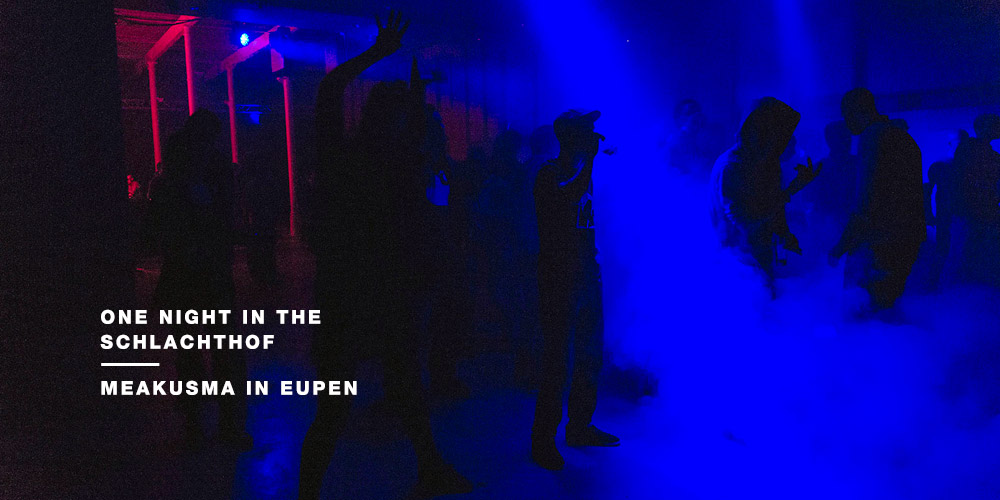 It’s Sunday night in Brussels and the onset of winter has left a chill lingering over the assembled crowd at the Renold factory-turned-art commune in the centre of the business district. This evening of performance art soundtracked by unreleased material from local producer (and former Renold resident) Michael Langeder of Different Fountains is not the reason I have come to Belgium for the weekend, but rather a pleasant addendum. In amongst the crowd of leftfield thinkers and drinkers huddled around the soup stand and the wood burner, I find myself in a conversation with Simon, a music consultant for one of the world’s most famous fashion brands.

We touch upon the perception of underground contemporary Belgian music in the rest of the world, and how some of its most successful musical exports are not always associated with their country of origin. He suggests that it would be hard for an independent Belgian record label to reach the stature of Warp, Ninja Tune or XL, leaving me to argue it would be nigh on impossible for any new label from anywhere to reach those kinds of heights again. I also add that of all the smaller Belgian labels I am familiar with, Meakusma have the diversity and creative vision of any one of those indie giants. Their event the previous night in the eastern town of Eupen was testament to such a claim.

The adventure began the evening before, waiting in a bitterly exposed car park on the south eastern side of Brussels with 50 or so other locals signed up for the two-hour trip out to the small town that the Meakusma team hail from. To many young Belgians living in the capital the idea of a night out in such a place may seem absurd, but Michael and Christoph from Meakusma have long been organising such events in their hometown. 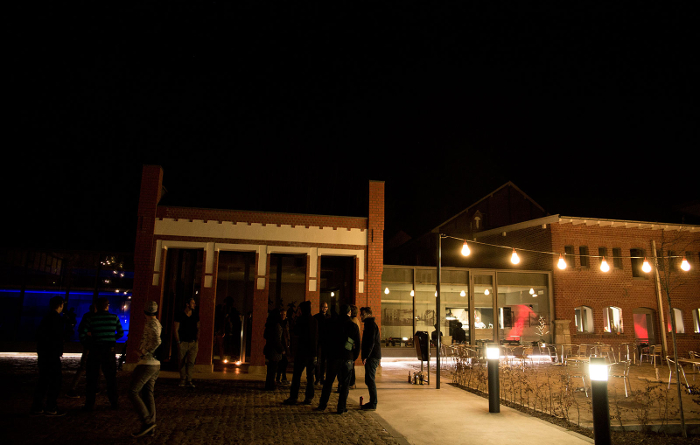 On the bus ride to Eupen, Different Fountains man Michael Langeder tells me about the first time he heard about Meakusma, seeing a line-up back in 2010 that included US group Tussle and a performance by the drummer from Trans Am in a small club house on the local camp site in Eupen. He had to borrow a friend’s van and drove the 130km to a town he had never heard of, to be confronted by a crowd of 30 people enjoying a thoroughly niche array of live music in an equally niche setting. Instead of passing his demo CD to one of the bands as he had planned, he set about tracking down the organisers of this curious event, which is how Different Fountains first connected with Meakusma.

He also spoke of the venue for this Saturday evening event, the Alter Schlachthof, Eupen’s former abattoir. Just a few years ago Different Fountains performed in this space with the meat hooks still hanging from the ceiling above them, but following a lavish renovation the building is now a far more civilised concern with three spacious rooms decked out in functional clean lines, although not at the expense of character.

Questions are raised on the bus journey about how many attendees might fill the expansive space, but Eupen’s close proximity to the German border suggests the healthy crowd already in attendance may include people from Cologne (which at just an hour away is closer than Brussels) as well as surrounding towns like Maastricht. As we file in, experimental saxophonist Andre Vida is already performing in the Kuhlraum, the more intimate space dedicated to the concert performances of the evening. Dressed in exotic regalia and layering up some strained vocals amongst his virtuoso brass tones, Vida’s performance suggests this will be the stage on which to witness the more experimental aspects of the line-up. 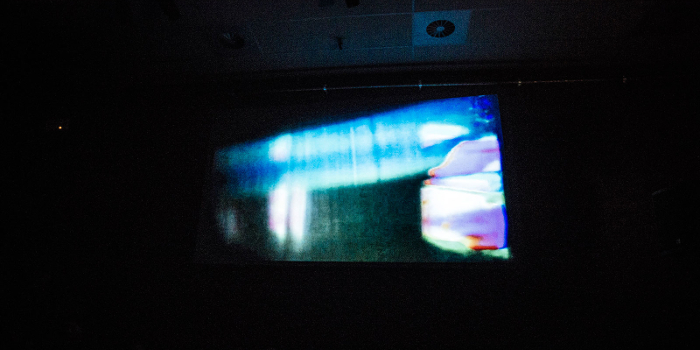 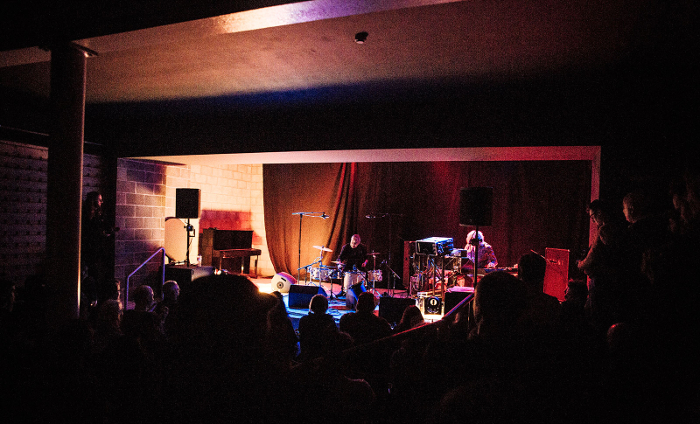 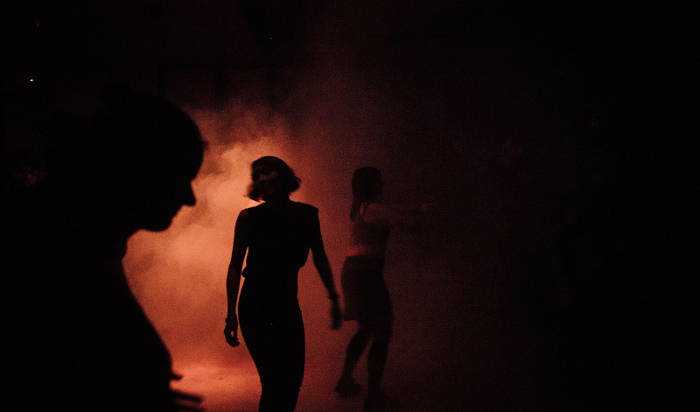 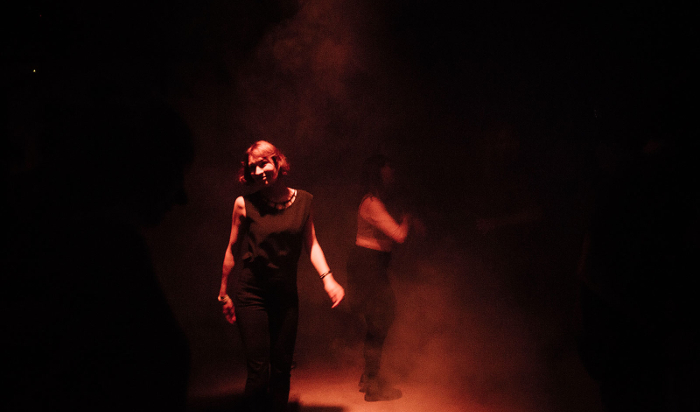 Meanwhile in the Kesselhaus a projection on the wall beams in a live birds eye view of illustrationist collective Poste Arienne drawing in response to the ambient tones of Rüftata110, otherwise known as Ralf Köster (the booker of Hamburg nightspot Golden Püdel). With cushions and rugs scattered on the floor the room makes for a perfect chill-out setting, framed in stark opposition to the Halle that plays host to the more focused house and techno aspects of the line-up. After Vida’s performance Efdemin is found warming up this cavernous space with a subtly abrasive range of sounds one step removed from the more typical deep house comfort food he has made his name.

The first jaw-dropping musical moment of the evening however surely belongs to Roedelius & Schneider whose live performance in the Kuhlraum follows two collaborative albums the pair recorded for Bureau B. Roedelius, a veteran of German electronic music since the heady ‘70s days of Cluster and Harmonia, predominantly focuses on delicate, lingering piano tones, while Schneider (of Kreidler and To Rococo Rot fame) takes care of expressive synth and FX touches that shape out a hypnotic, deeply emotive atmosphere.

In a surprisingly quick turn around, it’s not long before the stage has been cleared for Irmler & Liebezeit, the former being the organ man of Faust and the latter being the prolific drummer of Can. Jaki Liebezeit’s drumming, centred around his unique rhythmic concepts, are utterly captivating in their precision and subtle variations, but they seem at odds with the directionless wailing of Irmler’s synths. As such it feels like the performance achieves the most clarity when the drums roam on their own, unfettered by the impulsive blasts of organ tones from Irmler’s large rig.

With the live performances concluded for the night, there is a chance to pay more attention to the muscular movements of the main room’s techno line-up (frustratingly the crossover results in a missed chance to catch recent Meakusma signing Bryce Hackford in the Kesselhalle). Levon Vincent is rounding off his set to a crowded room, throwing in pumped up synth pop amongst more typical reams of acid-laced beats delivered in a surefooted, if perhaps unremarkable style. From there Munich duo Zenker Brothers take to the stage with an ear-snagging opening gambit that revels in choppy, UK-informed rhythms, shaking a different kind of energy into the crowd. Even when they drift into more straight-up techno territory the angles within their selections encourage a more kinetic kind of physical reaction amongst the younger portion of the attendees. 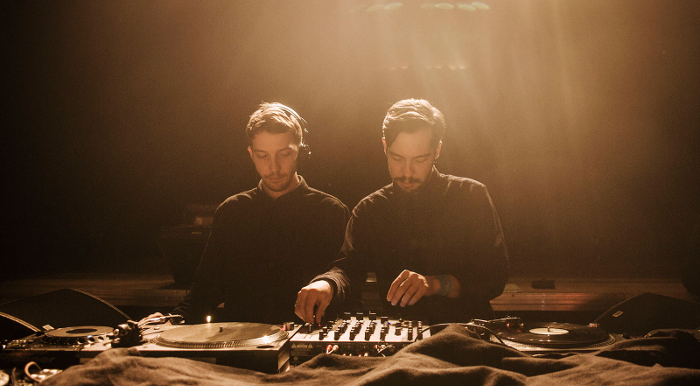 A surprise late addition to the line-up in the chill-out room sees Sensu take to the decks. Considered something of a Meakusma resident, the Luxembourg-based DJ and producer lays down a challenging array of tones and pulses, using artfully placed effects processing to push his two turntable set up into unpredictable creative realms that suit the dwindling hours of the party.

In its distinct three-pronged arrangement, the event feels like a perfect achievement of ambitious programming matched with canny bookings to ensure a diverse crowd. Between the dancefloor-ready party people and the academic listeners there is undoubtedly some crossover, which should always be an aim of a night that spans the accessible and the experimental. Late last year, whilst explaining the diversity of the Meakusma events, label co-founder Michael commented, “for us it was very important to do a mixture, because even if we were interested in this experimental scene we were also quite bored after a while because the focus became so much on the technical side, so at that moment the music was missing.”

As I speak to Michael and Christoph, just shy of the 4am curfew, they both meekly acknowledge the success of this latest venture while looking to ways to improve the musical flow with unquenched perfectionism. From a spectator’s perspective, even if not every musical moment was perfect, it was never dull, and there can be few events organized in any town across the world to host such a considered balance of sounds across the spectrum of new, old, immediate and esoteric.

While Meakusma might be some distance from the stature of those UK indie giants mentioned earlier, in their eclectic spirit and impeccable taste they sport the same qualities that such institutions were built on. Far from token label showcase nights, these events are an extension of the creative stamp that this ambitious pair from east Belgium are ever defining, and they serve credit to the music released as well as the music performed.

All photography courtesy of Caroline Lessire