SPR – Her Eyes Are An Abyss 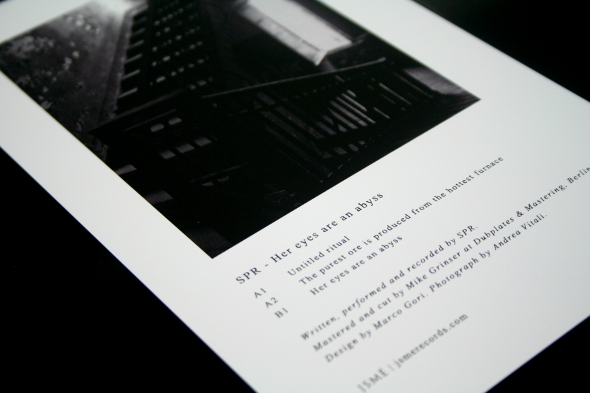 There is certainly some morose and mysterious music emerging from Hamburg at the moment. One need only take a listen to the recent podcast Golden Pudel’s Nina did for this site to get the a feel for the cold vibes emitting from the German port city of late. How did she describe it again; “Harbour City Sorrow”. Germany’s second largest city has its own unique charm though, there’s no doubt about that. From watching a sunrise up on the hill behind Golden Pudel in St. Pauli Fischmarkt, where the first beams of light break through those dense clouds, allowing you to admire the breadth of the city’s enormous docklands. Or, waking up with a cracking hangover on-board the MS Stubnitz and having to endure the walk of shame back downtown, in the pouring rain. It’s best described by another one of those clichés: there’s beauty in its darkness. 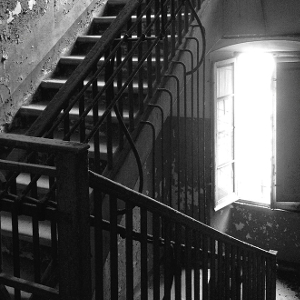 For JSMË’s second outing, the Berlin based audio-visual label has tapped the port city’s shadowy producer SPR, following the brilliant EP1 on the V I S label founded by the aforementioned Nina and Good News earlier this year. It’s more of the same chilling drone textures cum musique concrete that we’ve come to expect from him on offer here. And yes, it all conjures up fairly bleak visions of the imminent dark season; welcome to the north. A minor key reverberates, decaying slowly beneath subtle guitar feedback and the sinister squeals of nefarious night terrors on “Untitled Ritual”. The feedback gradually evolving into a dense wall of sound, soon joined by body bashing bass drops, white noise and the splatter of sacrificial blood echoing throughout the chamber.

“The Hottest Ore Is Produced From The Hottest Furnace” follows in suit; the distant beat of a drum ricochets throughout said chamber and grows in volume beneath the the sound of a blacksmith’s labour. Metal on metal, the rhythm of hammer and anvil; fresh steel being forged. Finally, “Her Eyes Are An Abyss” is an epic, yet undeniably unsettling nine minute long drone piece. Its heavily processed guitar treatments comprise multiple layers of feedback which howl and scream in sheer terror at a full moon rising.

All melodrama aside, there’s no doubt SPR is taking cues from the likes of Stephen O’Malley and Peter Rehberg. The producer himself is rumoured to have a history in black metal bands too, so aesthetically it all adds up. But the twenty odd minutes you’ll take listening to this record are the closest you’ll hear to a clandestine ritual in the cold northern woods, where such gatherings (in all their secrecy) are much more than worship, or as they say ‘black magic’.

A1. Untitled Ritual
A2. The Purest Ore Is Produced From The Hottest Furnace
B1. Her Eyes Are An Abyss