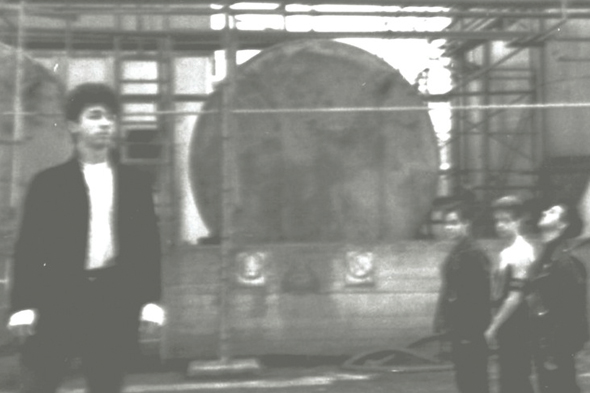 After a year that has established Mannequin as a potent force in the field of synth wave music both new and old, Alessandro Adriani’s label continues to serve up yet more intriguing propositions from the labyrinthine subculture of hidden treasures and contemporary interpretations. Most recently Sean Pierce demonstrated a lean and focused vision of rhythm tracks on Sutro, while the reissue of Move’s self-titled 1986 mini-album shone a light on a treasure of punky goth rock straight out of Florence. Before 2015 is out Mannequin have yet more new old material for us to savour, once again sourced from the most obscure corners of the Italian underground.

Effetto Joule were a trio comprised of Flavi Biagi, Valerio Biagi and Valerio Tassinari who formed in Modena in the late ’80s, issuing just one 12” single and a pair of self-released tapes that tapped into a dark approximation of the Italo disco sound. Mannequin have put together an EP that takes the lead track from the vinyl release as well as choice cuts from the Ultraviolet B tape, and throws in a remix from Danish Italo connoisseur Flemming Dalum as a bonus. Check out all tracks from this new edition of Roberspierre below, ahead of a slated release date of November 30.