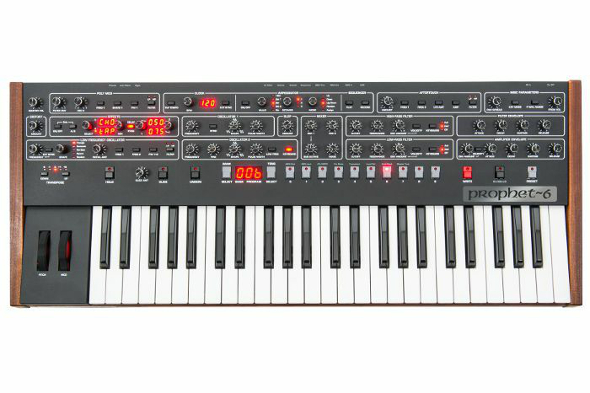 It really doesn’t feel all that long ago that Dave Smith caused a stir by releasing an all analogue poly synth. But actually eight years have passed since the Prophet 08 hit the shelves. In its wake there has been the hugely popular Prophet 12, which does pretty much anything you could ask of a synth, the Pro 2, a powerful mono synth, and furthermore, the Tempest Analogue drum machine.

But if you put any synth buff in front of the legendary Dave Smith, it’s likely the Prophet 5 that will get talked about, which was arguably the first polyphonic analogue synthesizer, released back in 1978. Still sought after and well-loved, it makes perfect sense that Dave Smith would develop a synth that takes the Prophet 5 design and reinvigorates it for a new era.

The Prophet 6 features all of the functions of the original with some added extras. For example, the new synth allows six-note-polyphony (the playing of six notes at the same time) over the original machine’s five. There is also a hi-pass filter in addition to the classic 24db/octave low pass filter, while after touch and velocity sensitivity have been added to the keyboard control.

As a Dave Smith and Sequential Circuits fan myself, the burning question on my mind was what kind of sound sources had been chosen to be at the heart of this new synth. Previously, Dave Smith instruments had used digital oscillators on their flagship Prophet 12 instrument, which sounded great. There were, however, always quiet murmurings from analogue purists that the signal path wasn’t completely authentic. Well this time we have been given discreet voltage controlled oscillators that are both analogue yet stable. So stable that Dave Smith has seen to it there is a way to control the amount of smudging between the oscillators in the form of a slop amount knob. 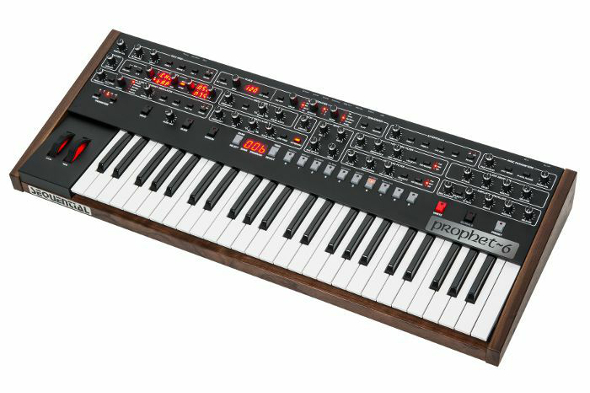 The layout feels a bit like a cross between the old Prophet 5 design and the modern face of Dave Smith Instruments with the vintage click buttons for browsing through the 999 patches and activating unison and chord hold functions. A cursory look into the presets reveals that all of the warm pad sounds and boogiefied bass patches you would expect to find are as creamy smooth as ever, and the array of sound effects and oddities really shows off what this machine is capable of. But, if you want to dive into a programming session and create your own patches you just simply click off the preset button and start playing around until you’re satisfied, saving your work in one of the 500 user patch slots.

The waveform selection on both oscillators is continuously variable so you can get some unique source material such as triangle wave with a hint of sawtooth. The mixer section gives you control over the levels of both oscillators, a sub of oscillator one and the volume of the noise generator, and to shape your basic sounds there is a classic ADSR envelope. I should add there are no menus to dive through at all. All the controls are right there on the front panel.

As part of the modernisation of this classic design, there is now the addition of a two pole resonant hi pass filter. The low frequency oscillator aids in further moulding your sound with classic wave shapes (including random) for modulating either the frequency of oscillators one and two, the pulse width (if the oscillators are set to square), amplitude of the wave (to create tremolo effects), low pass filter, hi-pass filter or both. The original Prophet 5 also had a Poly Mod section that features in this new synth that gives you the option to take the filter envelope and the frequency of oscillator two and modulate the wave, frequency or pulse width of oscillator one as well as both low pass and high pass filter frequencies.

The only digital part of the Prophet 6 is the effects section where you are given two controllable effects slots with reverb, delays, chorus and phaser all at 24bit 48 kHz. However, if you swear by analogue then there is a true effects bypass that gives you the option of keeping your signal path faithfully old school, and to add lashings of analogue dirt to your sound, Dave Smith has included an analogue stereo distortion control. 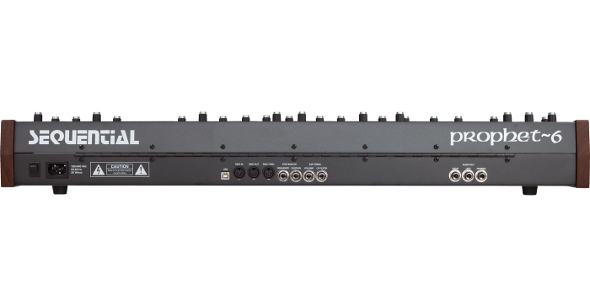 An arpeggiator and simple step sequencer allows you to sequence polyphony, enhancing the feature set, although it’s not possible to achieve parameter locks, however there are 64 steps that can be saved along with your patch for instant recall, so there is plenty of room for storing sequences for live performance.

Equally at home in the studio, the Prophet 6 has a sensible array of connection possibilities that include USB, MIDI I/O and Thru, left and right quarter-inch TRS ports and a similarly sized headphone output. The sequencer can be started and stopped by a footswitch and there are expression pedal ports for volume and the low pass filter as well as a sustain pedal input. I was also glad to find a proper IEC power cable fitting on the rear (commonly known as a kettle lead), which adds to the pro demeanour of this synth.

The Prophet 6 is an incredibly powerful analogue synth with a comfortable four octave keyboard that includes after touch and velocity sensitivity. In a lot of ways this synth is way more tactile an instrument than the flagship Prophet 12 and as such it is the sort of instrument that ticks a lot of boxes in terms of simple usability and sheer unadulterated fun whilst upstanding the Sequential legacy.
More info/buy