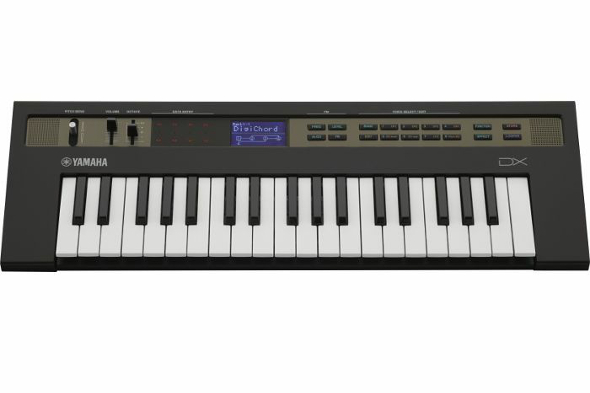 Sometimes you have to go backwards to go forwards. With Korg and Roland revisiting their illustrious past it now falls to Yamaha to step up and introduce a whole new generation of music creators to their legacy.

Yamaha made a huge impact on the synthesizer world, back in 1983, with the introduction of the DX7. With a vast array of FM sounds, it was the first digital synthesizer to become a runaway hit and, arguably, epitomised the sound of electronic music for a generation who had only just been introduced to the wonders of MIDI. It’s often said that history repeats itself and with the withering amount of analogue synthesizer reboots on offer these days, it is somewhat refreshing, if slightly predictable, that Yamaha would offer up something that harks back to those pioneering days.

Yet it is very comforting to once again be introduced to the soft brown and green styling once found on the DX7 that now adorns the Reface DX. The circle is round after all. Once the reminiscing is over we find there is more going on here than just a straight reissue and new packaging. Next to the obvious differences such as the mini keys and the three octave range, this new machine is decidedly more hands on.

One of the biggest drawbacks of the DX7 was the excessive amounts of menu diving required to create your own patches and this might be one of the reasons why so many of the DX7’s preset sounds can be found on records of the time, with the soft electric piano perhaps being the most well-known. Back in 1983, if you were used to analog subtractive synthesis, then you had to learn all about FM synthesis which pretty much required donning a white lab coat every time you powered up the synth.

Thankfully, with the Reface DX, manipulating four operators is a whole lot simpler. A series of four touch ribbon controllers allow you to get hold of all the parameters whilst the small but effective screen gives you clear visual feedback at all times. Rubberized buttons help you navigate between different configurations of algorithms, levels, frequency and effects. I couldn’t help thinking, however, it would have been better to have four mini recessed faders instead; similar to the volume and data entry faders on the DX7. The volume and octave selection faders on the new machine are raised mini faders with a brushed aluminium feel to them and again they might have been better served as recessed faders. 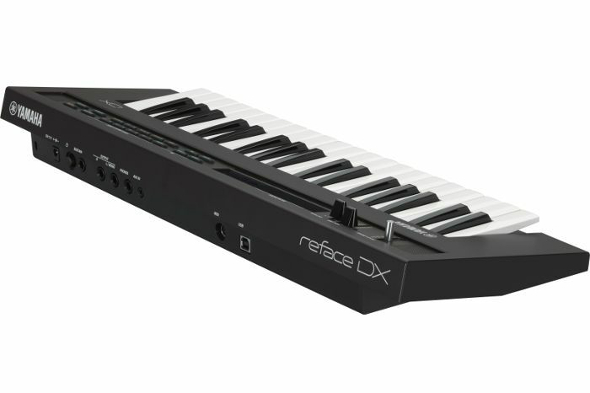 Putting these minor shortcomings aside it should be noted the Reface DX does sound impressive. It features some of the snappy bass sounds that you would associate with early house music as well as shimmering pads and robust marimbas and plucked sounds. With the hands on control, you can get a surprising amount of variety, including some of the more aggressive sounds that you wouldn’t normally associate with Yamaha. The Reface DX also offers you two effects slots with seven effects types including reverb, distortion, chorus, wah, flanger, phaser and delay. Again, the qualit is high with plenty of scope for tweaking the depth and rate of chorus and flangers, or the size and time of delays and reverbs.

The chassis of this synth has a solid and weighty feel to it and it instils confidence that it won’t easily get knocked off a keyboard stand whilst still being light enough to throw in a backpack if you are a travelling performer. On the back panel there are some simple connections that you would expect to find including a headphones port, left and rightquater-inch audio outputs, MIDI I/O (from a special breakout cable), mini-jack auxiliary input, sustain pedal input and USB.

Yamaha have taken a bit of flak for designing the Reface with mini keys, which take a bit of getting used to. The three octaves feature velocity sensitive keys, but no after touch. With the unit being fairly compact, any quandary over the size of keys can be rectified by using the DX with a keyboard controller. If your controller includes knobs and faders then all the better as all of the parameters on the DX can be mapped, making this synth even more of a hands on proposition.

The DX also features a looper, which works best with chords rather than bass lines or single note hooks. It allows you to set the tempo of your loop but there is no way of quantising the start or end points, or even the material that you record for that matter. Maybe in future Yamaha will rectify this shortcoming by adding an element of quantisation to save our blushes and also help this unit integrate better with other sequencers.

Yamaha have added an element of collaboration to the Reface project by developing a website that allows users to share their patches online. The site will be called Soundmondo and although not up and running as yet, we are promised that it will be soon. The unit itself has space for 32 patches by utilizing four banks of eight and if you need more space to quickly access your sound library, you can download the Reface Capture app for apple mobile devices, that allows you to store and recall patches quickly and with little fuss.

Also featuring a looper and the Reface Capture app is another member of the Reface family in the form of the Reface CS. This time there are five virtual analogue oscillator types with texture and mod controls which morph your base sound depending on the source wave form. Filter and resonance with a mixable envelope generator add some interesting synthesis possibilities. It feels like an analogue synth with good old fashioned subtractive synthesis and with all of the parameter in front of you, there is no need to dive through menus or use shift commands to access your parameters. 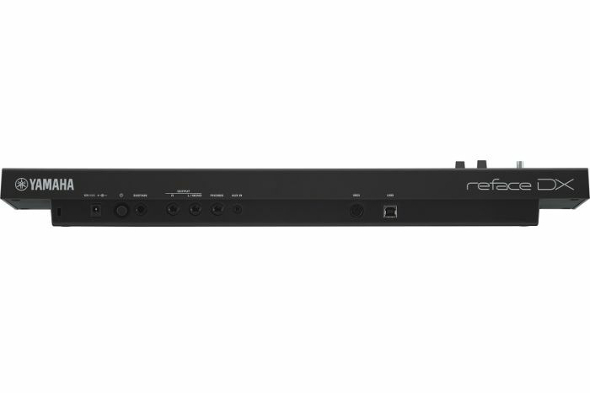 The CS follows the basic design of the DX, featuring all of the same inputs and outputs but this time there is no ribbon controller. The nature of the synthesis lends itself much more to faders of which there are plenty to get to grips with. As mentioned earlier, the looper is also featured as is a comprehensive effects section with plenty of depth and rate control. Also, in the Reface range are the CP, or Combi-Piano, which aims to bring those heavy Rhodes, Wurlitzer, Clavinet and CP piano sounds life in a much smaller and manageable unit. Also, in the range is the YC which aims to reimagine an old transistor tone wheel organ which includes a rotary speaker emulator as well as all of the drawbars and percussion switches you would expect from such a machine.

The Reface family all share the same simple mini keys keyboard and they all use the Reface Capture app. They all include small built in speakers for those of us that love the immediacy of being able to grab a synth off the shelf and dive straight into a sound design session. Perhaps the only element lacking from the DX and CS synths is a modulation wheel that could easily live next to the pitch bend control.

The Reface family do sound very impressive and it’s hard to imagine that these big sounds come from such demure instruments. Small yet tough, they are the ideal companion to musicians on the road and with their connection possibilities they are equally at home in the studio. These synths are both versatile and fit into that category of instruments that could be described as surprisingly affordable.
More info/buy