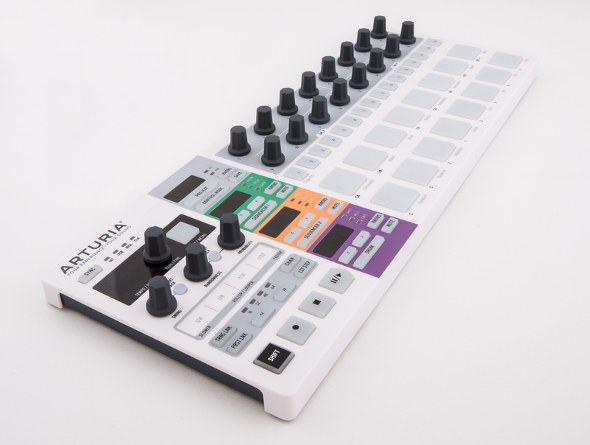 Arturia are the folks from Grenoble, France, that first came to prominence with their highly accurate soft synth emulations, followed up more recently with the release of the hugely popular MiniBrute, a hardware monophonic analogue synth. Analogue synths with the benefit of conveniently modern connections, such as MIDI over USB, have given the hardware scene a massive boost as it’s now as easier to harness analogue sound through a digital workstation. In an attempt to free the producer from their laptop, Arturia created the BeatStep, a hardware sequencer that gives you the chance to unleash 16 steps sequences over MIDI or CV in a single unit, while also doubling as general purpose control surface for your production software.

The newly developed BeatStep Pro, however, can do all of the tricks that its predecessor does but with a lot of added improvements. Firstly, instead of a single 16 step sequence, you can now have two melodic sequences and a 16 track drum sequence with up to 64 steps per sequence. Then, on top of that, are 16 projects which are essentially 16 sets of those 16 step sequences per-track. So there is little chance of you running out of space to store sequences.

Thirdly, being the grown up version of the BeatStep, you would be right to expect a MIDI controller element. So the new BeatStep Pro features a mode that turns the knobs and switches into tactile controls for your DAW. The knobs themselves are touch sensitive and have a comfortable yet robust feel, while the performance pads are both pressure and velocity sensitive. You can save a single mapping per project, along with 16 sequences per track.

The chassis of the BeatStep Pro feels lightweight yet sturdy, with its added features making it around thirty percent bigger than its little brother. Along with the beefed up sequencing and controller capabilities there is an added digital display that gives crucial visual feedback on various parameters including the all-important tempo, surprisingly missing from the original unit. 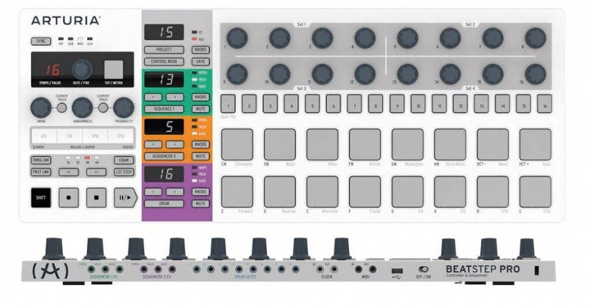 Cracking into a jam on the BeatStep Pro was intuitive and, for the most part, I didn’t need to look at the manual or watch any official tuition videos from Arturia to get a satisfying set of sequences going. There are two ways of inputting notes into the sequencer; either by activating a step using any of the 16 step buttons and adjusting the pitch, velocity and gate of each of those steps using the knobs, or by actually playing the notes live on the pads that double as an octave keyboard. The latter being a feature that has set Ableton Live apart as a piece of production software for years and has only been available on hardware sequencers that are much more expensive, such as Elektron’s Analog Four.

Looking around the rear panel you will be pleased by the vast array of connection possibilities; MIDI I/O, Clock I/O (via DIN), USB (that also powers the unit). There is also a satisfyingly hefty expanse of CV connections that include two completely separate gate, velocity and pitch outputs for the two pitch sequencers, as well as eight gates for triggering drums. So not only can you control and clock your laptop software from the BeatStep Pro, but you can sequence vintage analogue synths via CV. And you can even clock an old Roland drum machine via DIN, not forgetting MIDI synths either. If you want to sequence only MIDI equipment, you will have to set your hardware to only receive on the MIDI channels assigned to each sequence and in that case you are going to need MIDI Thru which isn’t always included on modern hardware.

The BeatStep Pro is, firstly a stand-alone hardware sequencer that retains the simplicity of analogue sequencers such as Doepfer’s Dark Time and the more recent Korg SQ-1. The big drawback being that those sequencers will only sequence one monophonic part at a time. The BeatStep Pro, with its two melodic sequencers, 16 tracks of drums and control mode offers a lot more and it comes in at nearly half the price of the Doepfer Dark Time.

One of the problems with getting electronic instruments to communicate with each other is the sheer amount of technical information that needs to be digested to trouble shoot any unruly connection issues. Thankfully, Arturia have provided some relief in the shape of their MIDI Control Centre which will help you configure your set up without any major headaches.

With the added bonus of doubling as a MIDI controller, the BeatStep Pro does everything you want a stand-alone sequencer to do. It will be difficult to find another sequencer as flexible as this in its price range, and if you weigh in the extra performance features such as beat roller and a randomizer function that works independently on each melodic sequencer, the BeatStep Pro is the sort of winning hardware I hope to see in the live arena soon.
More info/buy