The second installment in the Vancouver tape label’s new wax outlet is from a bubbling-up New Yorker.

Just last week we shouted about the momentous news that 1080p was graduating from a prolific tape label into the big-boy britches of vinyl distribution, and doing so in fine style with a single from Project Pablo entitled I Want To Believe. If there’s one thing the Canadian label has proven itself to be good at, it’s getting a high volume of music out there into the world at a seemingly unrelenting pace. Max McFerren meanwhile has been bubbling up slowly but surely over time, from early 12”s for Sci-Fi & Fantasy to starting up a brief white label concern called Shoot The Lobster with Grayson Revoir. In more recent times he has been found moonlighting on the most recent Don’t Be Afraid 19.5 split release and caught a bit of a buzz with his Real Problem 12” on Aery Metals last year. He was also previously found moonlighting on a couple of 1080p cassette releases under the MCFERRDOG alias.

So it is that 1080p fires out yet another high-quality missive in the shape of McFerren’s latest single, Sipps. The four-track 12” plots its trajectory for a more dancefloor bent to the ranging remit the label commonly adheres to, keeping the drums dusty and the acid decidedly lysergic. The news of this single comes ahead of McFerren joining Project Pablo on the road around Europe throughout October, flying the 1080p flag in Berlin, Amsterdam, London and plenty more besides. You can preview the full extent of McFerren’s EP via the SoundCloud player below, while details of the European tour can be found on Project Pablo’s Facebook page.

1080p will release Sipps by Max McFerrern on September 21. 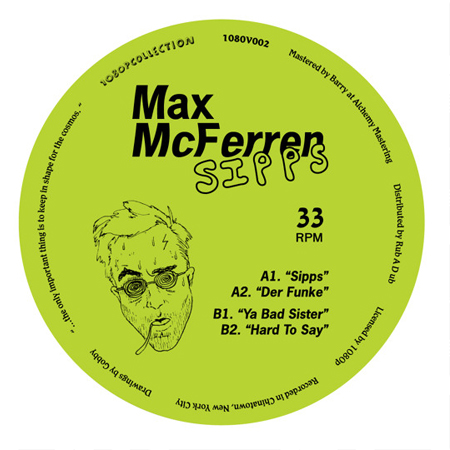