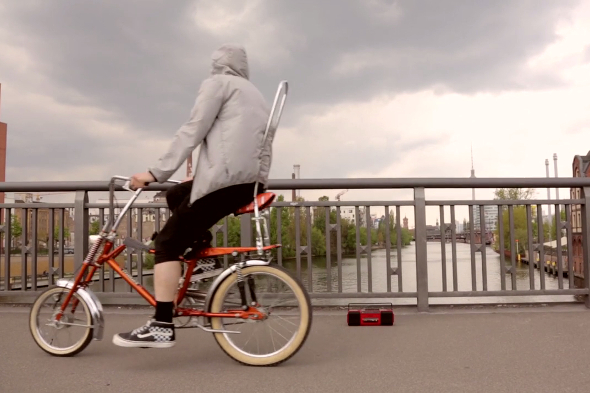 Follow artists like Levon Vincent, Fred P. and Christopher Rau around Berlin carrying a “mysterious radio” in this film directed and scored by Armon Bazile.

Deepblak boss AYBEE makes his directorial debut with a 45-minute silent film called The Gift which sees a mini-boom box transported and passed around Berlin by a handful of artist based in the city. Iconic landmarks of the German capital feature such as Hard Wax and its surrounding locale Kottbusser Tor, and you’ll see artists like Levon Vincent (pictured above) peddle and push his bike around a blustery Kreuzberg. Fred P. cruises through Görlitzer Park on a sunny day and Alland Byallo also features, strolling alongside the East Side Gallery before stopping off to contemplate the view of the Spree. The film provides AYBEE with a backdrop for his soundtrack which fluctuates from abstract sound design and ambient atmospheres to housier and techno productions. Watch The Gift in full below.