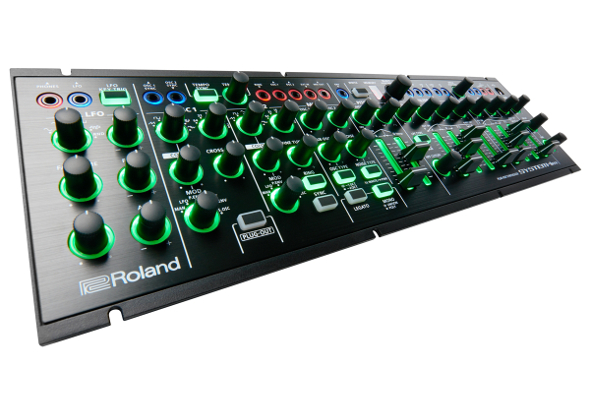 The world of modular synthesizers can be as fascinating as it can seem impenetrable. But its premise is a simple one: to build personalised chains of signal through combinations of specialised modules. Some of the most relevant artists in electronic music, from techno to more experimental styles, praise the qualities of this approach because of the endless results it offers. The growing appeal stems from losing oneself in a spaghetti of wires and untraceable signal paths, creating inevitably unpredictable and organic results.

Having progressed from a fairly small number of companies to a much larger affair, the industry of module manufacturing is trying to keep up with an increase in demand, and, much like Roland’s Aira series, the launch of the new SYSTEM-1m couldn’t be more timely. A far cry from more artisanal options on the market, the SYSTEM-1m sports the futuristic look of Roland’s Aira series. There’s a nice feel to the black panel, solid and dark, and it’s a little ‘Hollywood’ with a bold contour of green, and lit knobs and faders.

The SYSTEM-1m, however, isn’t quite your regular module. In fact, apart from added in/out audio and cv gate connections on the front panel, a lack of a keyboard and the possibility to use the power source of a modular rack, the new member of the Aira family differs very little from its brother launched last year, the SYSTEM-1 plug out synth. That’s precisely the idea. The inspiration, according to Roland, comes from their classic SYSTEM 100 and SYSTEM 100m semi modular synths; two analogue tour de force machines, both respectively designed as a more limited standalones.

After some tedious registration and software installation, I find myself wondering how much sense this could make for a modular aficionado. A bulk of decent but mostly unremarkable modules stitched together and sold en masse as a digital plug out system could hardly be any synth-lover’s holy grail. But despite my initial scepticism, as soon as powered up and started feeding MIDI into the SYSTEM I had to reconsider and keep an open mind. The sound was great. 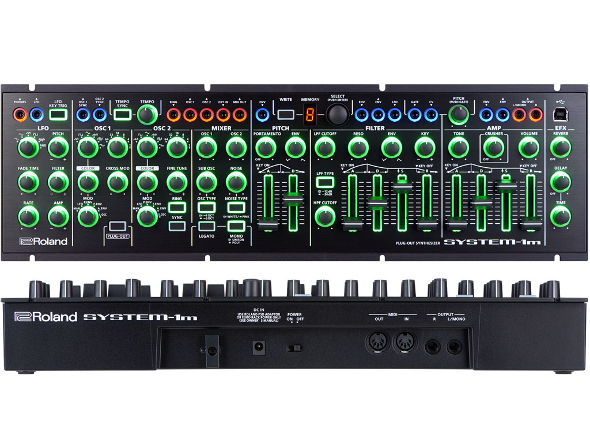 In the same way as other Aira machines are able to keep up with the sonic expectations created by the iconic gear that inspired them, the SYSTEM-1m doesn’t drop the ball. At the basis of its sound-generating capabilities lies a rather vast amount of options. On the two oscillators available we’re able to pick between six different waves – three pure and three phased – with the added ability to add a sub oscillator and noise tuner into the mix (with octave control for the sub oscillator and a switch for white or pink noise). There’s two monophonic and polyphonic modes to choose from, and there’s full connectivity potential for each oscillator.

Each oscillator carries its own multiple voice and colour controls, the latter with modulation value assignable to different sources such as LFO, filter and amplitude envelopes, among others. On top of the volume envelope there’s the habitual attack-decay-sustain-release sliders for the filter and a simplified version for the pitch, with only attack and decay. There’s an amount knob for the pitch envelope, with negative and positive values, which offers very cool results.

The filter comes with two modes of low pass control and a handy highpass knob to boot – not as powerful as, for example the Minibrute, but still strong. Sounds can be transmogrified from transparent to violently resonant when pushed to the limit, and I had fun turning clunky bass sounds into heavy kick-drums while creating pure tones without any wave signal thrown in. Both amp and filter sections offer full front panel connectivity with ins and outs for envelopes, audio output, and inputs for cv, gate and LFO.

The combination of all these – plus LFO capability and added effects – creates a versatile beast and there’s vast ground to cover as far as sound-sculpting goes. You can easily travel between harsh, Skrillex-type EDM inferno and acidic techno arps, or end up in the most pastoral electronica and krautrock-inspired synthscapes. As a digital synth it can be quite a powerful machine, very impressively so, but it’ll certainly be an odd transplant in a Eurorack, sitting next to other less cosmetically inclined modules. The SYSTEM-1 is a great starting point for those keen to begin noodling their way through the fascinating world of modular synthesis.