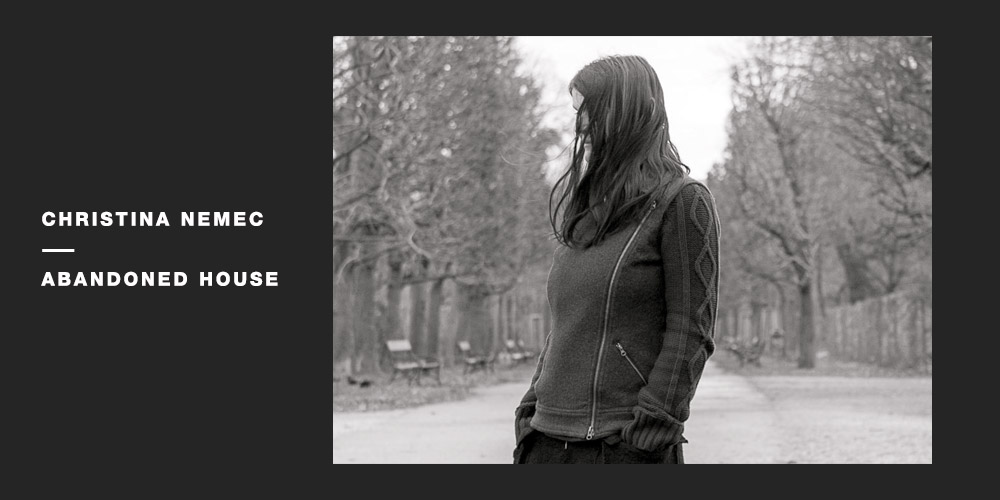 In the countryside about an hour outside of Vienna lies an abandoned house. It can be found in the country’s southernmost state, Carinthia, shrouded by pine trees and flailing grass near Christina Nemec’s holiday home. For the most part it’s somewhere devoid of human life, and aside from the occasional putting-sound of a tractor in the distance, there’s no mechanical hum of cars, rattling trucks or the rumble of jet engines overhead. “You only hear the wind and the birds and the water,” Nemec explains, “it’s a little hippy-esque.”

Earlier this year Editions Mego released Empty Airport, Nemec’s second solo album under her prevailing Chra alias, and the opening track “Abandoned House” takes its sounds and inspirations from the woods surrounding that deserted bungalow. “Two thirds of the album was recorded there,” Nemec tells me of Carinthia. “I go there sometimes and I’m alone for two days and I have a lot of time, I sit there and drink red wine and beer and then I start to record.”

Nemec is speaking to me from Vienna, and down the line from a stinking hot North East London she says, chuckling, “I’ve never talked to my computer,” before our Skype connection is temporarily quashed from the heat either one of our computers is suffering. With our conversation cut mid-sentence my voice recorder captures a quieter moment of my neighbourhood which is drenched in the sound of a plane’s billowing engines coming from the stratosphere above, and after hearing Nemec’s anecdotes about her Carinthian getaway, it becomes an echoing reminder of how seldom escape is from these noises of civilisation. 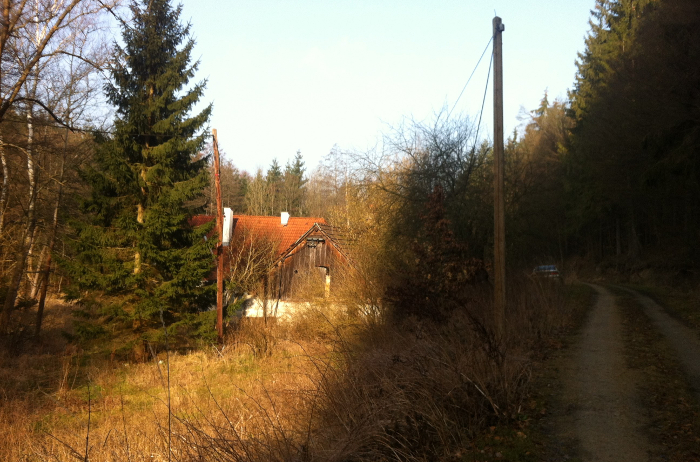 Counteracting influences on Empty Airport, Nemec says, stem from that overwhelming sense of helpless we can all sometimes feel with the world around us; the same type you’re likely to get watching the news some nights. “I guess it all started with 9/11,” Nemec begins of the album’s narrative, “what was happening in the years (between) 2000-2014…there was this feeling of helpless with all these things (going on) and you’re sitting in your…” Nemec realigns her point, “I have a nice apartment, I have nice friends, I have quite a nice quality of living, and then you see all these things which are happening in Iraq and in Syria, and then there’s all these people who are drowning in the sea between Africa and Italy, Greece and Turkey, and it’s kind of a nightmare.”

Productions like “Landmine” and “Contaminated Landscape” may suggest Empty Airport is an ominous listen of pent-up, artistic frustration, however Nemec explains music on the album is “very contradictory to urban life and war zones.” The ruffian style of her Raster-Noton electronics and industrial atmospheres are offset by mellow and earthy drones, circulating textures of white noise, and sombre, atonal melodies, particularly that of the title track. And her combination of both aggressive and passive sounds is what adds a sonic enunciation to Nemec’s album that’s sometimes lost in noise-based music.

Nemec may not be sporting the green hair that once refused her entry into the bars of her hometown Villach, but she’s still punk. Discovering ‘the attitude’ for herself in her early teens, Nemec bought and swapped tapes and fanzines with punks from Hamburg who would sometimes holiday in Carinthia. At age 14 she moved to a squat house in Vienna, and she’s lived in the city ever since. 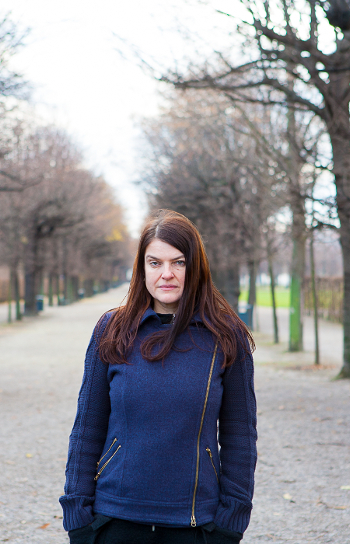 From the pop pursuits of her teenage years to her time in the early ‘90s with avant garde rock and industrial outfit Bray, Nemec has been in bands her whole life. Right now she plays bass in Shampoo Boy, a noise troupe with long-time friends Christian Schachinger and Editions Mego founder Peter Rehberg whose music is released by Blackest Ever Black. Furthermore, with emerging techno producer Patricia Enigl, aka Irradiation – an artist that’s been remixed by Milton Bradley, Dasha Rush, and Cassegrain’s Hüseyin Evirgen – the two create statically-charged blends of pulsating, ambient drone under the name Pasajera Oscura whose music is yet to be released.

It was Nemec’s Chra project that inaugurated her Comfortzone label in 2008, which, by and large, has become a platform for a queer feminist agenda. “I think 80 per cent, even 90 per cent are female producers,” Nemec explains of the artists on Comfortzone, which includes Cherry Sunkist, Kumbia Queers and the best alias I’ve come across in sometime, Crazy Bitch In A Cave. Others to release on Comfortzone include Mika Vainio, Mathias Schaffhäuser, and Bonnie Li who Nemec says, “sings about her queer sexual desires.”

Of music on the label, Nemec adds, “maybe not on the first listen, but as you go deeper into the lyrics, or into the projects, you can see the queer feminist issues.” There were some initial concerns when launching Comfortzone about the label being placed in a box, or schublade, when structuring its modus operadi around a set of social, sexually-charged and political ideas, but today it can only be seen as stronger for it.

“I think the times are changing a little bit with this fact service where they’re counting all these festivals, and data, and representation,” Nemec explains, levelling, “if a person spends their own money (on a festival), risks their own money and says I’ll do this by myself then you can’t really say you have to invite female musicians.” I ask Nemec how she feels about feminism in electronic music right now, and she answers, “I think it’s more a topic of discussion now with famous producers like Björk and Holly Herndon; it’s getting more into the club scene, it’s more of a topic now.”

“Sometimes I go to some discussion panels and it’s like it’s just an alibi – like, OK, you have to do it once a year and then you feel good about it and then you go back to normality,” she says. “The clubs, the programming; if they do it the way they do it, it’s fine with me, but it’s sometimes more about these public funded festivals and public funded resources,” Nemec says. “We have this law in Austria; if you get public funds (for a festival) then you have a quota, like 50/50 (male/female) and that’s what I would say can be really helpful,” Nemec feels, while citing other festivals like Electric Indigo’s curated Popfest Wien, Volt in Sweden, and Barcelona’s Sónar as operations helping level imbalance. 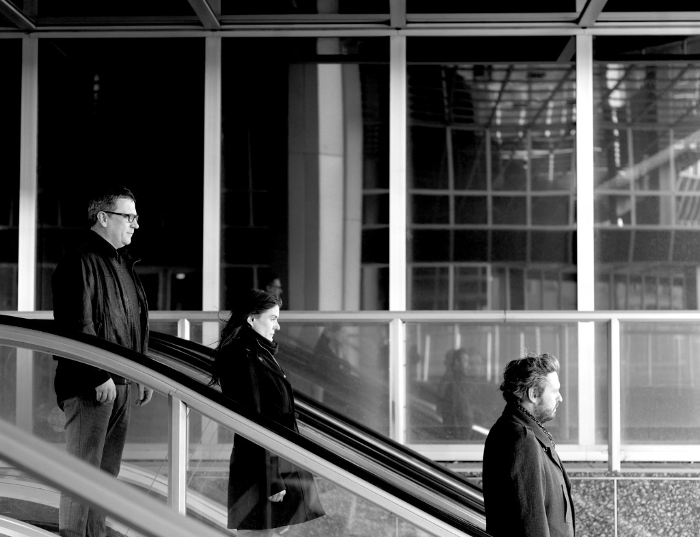 Another point Nemec raises is the importance of role models for younger women; “to see producers, to see some pictures of producers, and not only women in bikinis.” Nemec continues, “I don’t have anything against that but I also like to see woman behind decks.” Nemec’s own role models include artists like Siouxsie Sioux, Sonic Youth’s Kim Gordon and Talking Heads bassist Tina Weymouth. “I guess during this punk movement there were female musicians who inspired other girls to do music, like the Portland scene and then ten years later there was Riot grrrl,” Nemec explains, highlighting a third wave feminist movement of underground hardcore and punk. Nemec has also on occasion worked with influential no wave artist Lydia Lunch, which included the collaborative In Comfort 12” with French techno producer and Knotweed founder Philippe Petit.

Today it’s people like Andrea Parker and her namesake Shelley that Nemec cites as influential, and of the former she says, “Andrea is one of the most important influences, and for me it was her remix of this Ryuichi Sakamoto piece called “Grief”, there’s a Pan Sonic remix too, and both tracks are very, very important for my interest in music.” Nemec adds Shelly Parker is someone she feels connected to after meeting her in Warsaw, and tells me there are plans afoot to release some of her music on a forthcoming compilation. Other work in Nemec’s pipeline includes further Shampoo Boy sessions featuring Rehberg’s new modular system with the suggestion of a third LP in 2017, the development of the Pasajera Oscura project with Patricia Enigl, further touring and gigs, more Comfortzone releases and the inauguration of a Viennese tape label.

“The label said I should make the first cat number,” Nemec tells me, “so I borrowed a four-track tape recorder because I want to record it totally on a four-track with no overdubs or computer, it’s just with my synthesiser and stuff I have here – the classic way.”

Header image by Ilaria Pace based on portrait by Bernadette Reiter