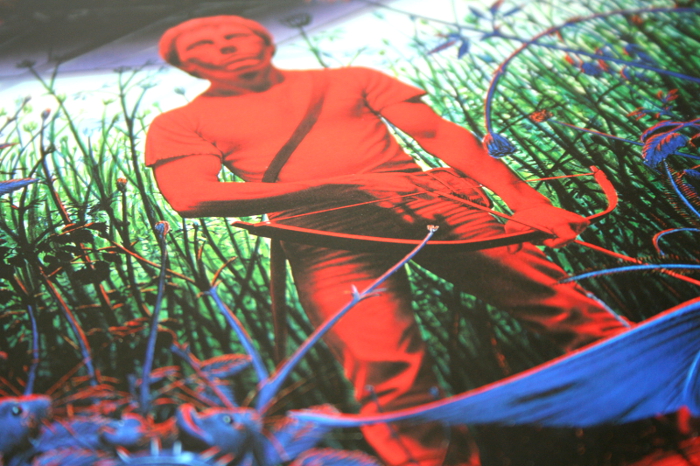 Bankhead! The Trilogy Tapes founder was always likely to feature prominently in the latest edition of the Best Record Sleeves column with no less than four 12″s on the label surfacing over the course of July. In the end it was the TTT debut of EMG and Battista that understandably hogged the limelight; in the most simplistic of terms, The Bridge 12″ looks astounding. If you follow the label, you will no doubt be familiar with the bizarre little detail that makes up the cover for The Bridge but two dimensional .jpegs do not do Bankhead’s work justice. You need to hold this record in your sweaty grip to drink it all in.

Another label to benefit from Will Bankhead’s refined artistic talents in July was Berceuse Heroique and their highly anticipated reissue of the Smackos album The Age of Candy Candy by Danny Wolfers. Given the humourous Dutchman sought inspiration for the album from the Japanese novel and manga Candy Candy, it was little surprise Bankhead did the same when tasked with providing artwork for the weighty double LP edition. In contrast to the visual overload that was the EMG and Battista 12″, Bankhead chose restraint for The Age of Candy Candy with just a few bold images spread across the gatefold album cover. 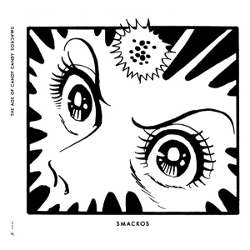 Another label with origins in Greece, Nous, continued their simple yet eye catching approach to sleeve design with the long-delayed arrival of Karen Gwyer’s Bouloman 12″. As Rose Mardit’s recent feature on the label on Juno Plus revealed, Nous founder George Mavrikos seeks out his talented friends to assist with the various elements of any single release with Simeon Nomidis responsible for developing the visual theme from the off. The artwork for Bouloman continues Nomidis’s visual theme of geometric patterns previously seen on Call Super and O. Xander records, and offered up one of the most immediately recognisable 12″s of July.

Midwich, the latest endeavour from one of the US underground’s longest serving patrons, James Marlon Magas, was undoubtedly the most distinctive looking new label to emerge in July. Licensing the illustrations respected artist Mark Salwowski originally committed to the sci-fi writing of Brian Aldiss for the first two Midwich releases will surely go down as one of the best decisions in recent record label history. The Moon Pool & Dead Band 12″ MEQ stood out in particular and the below photos of that record speak for themselves!

Take a look back through the discography of Venetian Snares and you will see Aaron Funk has a penchant for cover art that is every bit as attention grabbing as the unconventional time signatures that characterise his music. Occasionally this leads to an artistic misstep, such as Arnold Steiner’s depiction of Funk as centaur that adorned last year’s Venetian Snares album My Love Is A Bulldozer. Funk’s latest Planet Mu transmission, Your Face, offered less chance of filling you with nightmarish visions of mythical Greek beasts but still toyed with notions of human manipulation. Either Funk or Planet Mu are fans of Matthieu Bourel’s work as EK Dojo, which merges the human form with collagist artwork, with the Berlin-based artist’s commission finding the Frenchman doing something similar to a portrait by Chen Man. 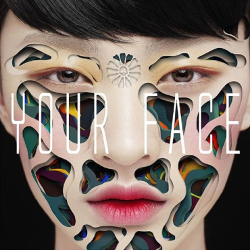 I will freely admit Gwilym Gold is not an artist I have paid a great deal of attention to in recent years though his name always seems to pop up mentally whenever the discussion turns to musicians embracing technology for innovative means. It is therefore little surprise to find the physical manifestation of his latest 12″ single, Flex, is only one element to an overall visual project developed with artist Eddie Peake (be warned that link is VERY NSFW). Issued through the latter’s HYMN label, the artwork for Flex looks like the visual manifestation of a fork-related wet dream by David Icke, with Peake revealing to FACT inspiration was also sought from The Matrix and animation classic Who Framed Roger Rabbit?

The addition of Danse Noire founder Aisha Devi to the Houndstooth roster brought a degree of provocation not felt in the label’s recent output, not least for the title of her label debut, Conscious Cunt. How the three tracks within conveyed Devi’s statement that she was exploring womanhood and touching on spirituality, materialism, and societal pressure is for discussion outside of this column. What cannot be dismissed however is the boldness of the artwork from Devi’s regular creative partner Neils Wehrspann, every bit as eye-catching as that title.

Speaking to us earlier this year, Andrew Lyster of the meandyou. collective expanded on the influences that have directed his approach to the design for their club night’s flyers and output as a label. “Minimalism / Black / White have been strong features of the design throughout the last seven years,” Lyster said, adding that working within these parameters represented a fun challenge. Lyster’s design for the first full artist release on meandyou., Herron’s The Night Garden, represented a continuation of this approach. Depending on the angle or how your eyes were feeling, the cover art looked like a photorealistic depiction of a thick, oily liquid sloshing around or a birdseye view of a strange, snow-capped terrain.