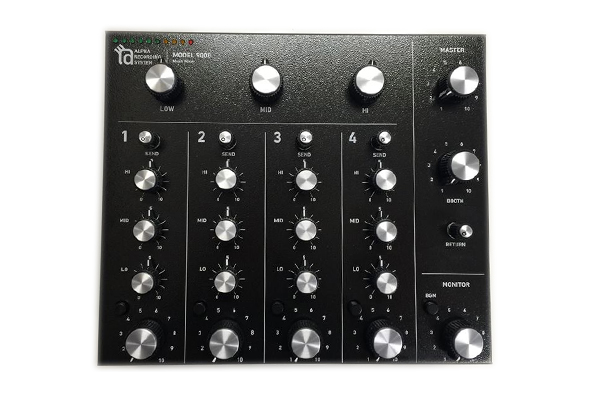 It’s been a landmark year for Japanese manufacturer Alpha Recording Systems with their MODEL4100 and MODEL6700 mixers entering the increasingly competitive rotary market with widespread support. As we reported earlier this year, the latter mixer in particular showed off where the priorities of the designers lie, with the emphasis on sound quality rather than second-rate effects-driven gimmicks. You’ll be lucky to find anything as flashy as a channel meter on these streamlined units, even on the hefty six-channel 6700. What was noticeable about the previous ARS creations was that they were designed to be rack-mounted, no doubt a nod to the professional or high-end market such specifications are aimed at.

Considering the apparent demand for rotary mixers amongst bedroom hobbyists, it makes sense then that ARS has seen fit to deliver a more modest table-top version. The MODEL9000 sports four channels with three-band EQ and isolation, an overall master EQ, plus the effect sends and a return for outboard processing. There’s little more to the mixer than that, other than the voluptuous appeal of those rotary knobs and an assurance of build quality over fancy features, and it should see ARS gain a footing into the wider DJ mixer market.