The battle-geared two-channel mixer is loaded with customisable features for use in and out of the DJ software.

For mixer and controller manufacturers, there continues to be mileage in finding the ultimate configuration of features and construction to suit the modern hybrid DJ set up. Where multi-format rigs are commonplace both in clubs and at home, it makes sense to find a mixer that ably caters to both the laptop jockeys and those still rooted in physical formats. Serato DJ certainly continues to be the popular choice for those wanting tactile control with the convenience of digital technology, and there have been plenty of mixers tailored to the software, from Rane’s own TTM57 MKII to Allen & Heath’s recently released Xone 43C.

Pioneer too have previously tackled Serato functionality with the DJM-900SRT, but now they have switched their focus even more towards tools that increase the flexibility of the software while remaining grounded in hands-on, out-of-the-box mixing. On first glance the DJM-S9 is instantly a unique proposition with its glowing trigger pads and FX buttons, included to give you direct control over looping, cues, samples or any other Serato feature you prefer to have a direct line to. Meanwhile the sturdy build of the two volume faders and cross fader includes low latency, ‘Feeling Adjust’ dials and three kinds of shock absorbing ‘Fader Bumpers’ to allow choice of the resistance you prefer to feel. 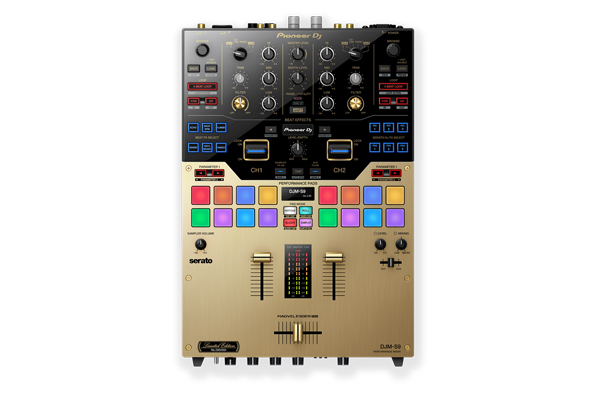 The contactless magnetic crossfader and tweakable curve is where it becomes clear this is a mixer geared towards those with a penchant for turntablism. Although it’s built as a two-channel mixer, the DJM-S9 is fully capable of controlling four Serato decks if required, but with its fifteen on-board beat effects it has plenty to offer those who don’t use the software. That said, with the inclusion of two sound cards for seamless back-to-back playing between different laptops, there is understandably more to entice the Serato spinner towards this particular bit of kit.

For those who want to make a visual statement with their choice of mixer, Pioneer are also releasing a limited edition gold version of the new mixer called the DJM-S9-Ns. Released alongside a gold model of the new PLX-1000 turntable, just 1,000 have been made available for those who require a little more glamour in their DJ set up.

The Pioneer DJM-S9 is available now. You can read more about the technical specifications of the mixer here.