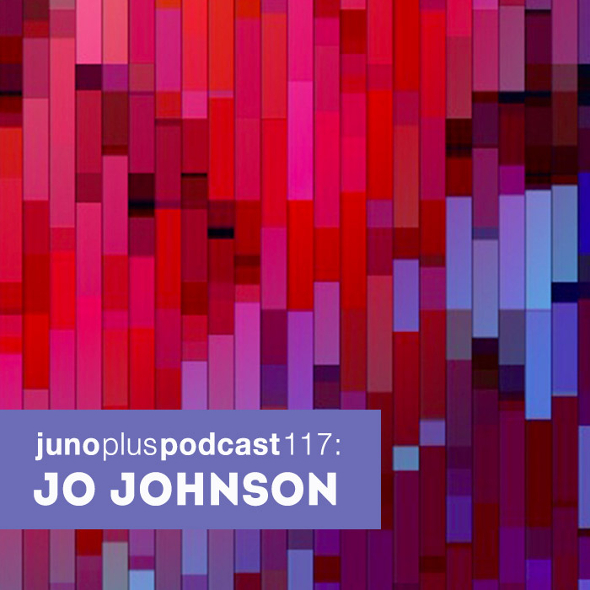 Sink into the Bleep43 associate’s ambient live set recorded straight from the mixing desk at Freerotation 2015.

With a long history of involvement within the electro-focused Bleep43 collective behind her, Jo Johnson surprised many with the release of her excellent debut album Weaving on Further Records. A calming exercise in minimalist composition and new age melodies, Weaving quite rightly featured among our favourite albums of last year and remains a record that gets repeat office airings midway through 2015. With this in mind, the notion of seeking out Johnson for a mix started to form a few months back, though the artist herself told us she was fully focussed on preparing for her live show at this year’s edition of the Freerotation festival that took place a few weekends ago.

Unperturbed, we floated the idea of potentially hosting Johnson’s Freerotation set as part of our podcast series in the event of her recording the performance. Luckily for us and you, Johnson was, and we are thrilled to offer a platform for Johnson’s near hour-long live set. Performed deep into the night at the festival’s yurt stage, Johnson’s set consists entirely of new and unreleased material from her. If you are a fan of Weaving this performance from Johnson will definitely resonate with you.

Johnson was kind enough to answer some questions that should offer some context for this recorded performance, as well as her relationship with Further Records and what we can expect from Bleep43 over the coming months.

Hello Jo, can you tell us how this live set went down at Freerotation?

Well, I was on at 3:30am in the yurt, which is a large, circular, indoor tent. The floor of the yurt is covered with cushions and rugs and the audience sits or lies down. People can really get lost, doze off, come to, chat and absorb the music on the level that works for them.

The sound is beautiful in there, the speakers are slightly angled down towards the audience… So it’s quite a unique space for live beatless/ambient/experimental music (I don’t get on well with any of those terms but can’t think of anything better). It’s just perfect. I felt people got into my set, I hope they did… Anyway, I was really moved at the end, the applause was way longer and louder than I expected, and I’ve had good feedback since.

This was your debut year performing at the festival right?

Yeah, I’m so happy I got to play. Last year was my first time at the festival and the atmosphere was so good. Freerotation is small, not-for-profit, and lots of women attend as they have policies to try to keep the balance even. They also have more women on the line-up than most festivals. It just has a unique, utopian kind of feel to it.

The security are cool, and because there’s a members-based invitation system, people know each other and it’s very much a community with no real dividing line between crew, artists, DJs and audience. Loads of people give their time for free to make it happen.

Last year, Surgeon played two of my tracks during his ambient hybrid set in the yurt, which blew me away. I knew right then I had to play in the yurt myself and I basically pestered them to let me have a slot. Luckily Steevio and Suzybee were kind enough to let me play.

And we believe it’s all forthcoming material yes?

It’s all new, unreleased material, and I’m beginning work on two releases now so there’s a good chance some or all of it will be included on those.

What’s the balance for a performance such as this in terms of preparation prior and improvisation during?

I did quite a lot of preparation, because I’m so into melody and harmony, and I’m not classically trained or anything, so I have to work hard on the elements in advance. There’s no way I could improvise from scratch the kind of melodic material I really find satisfying to play. I recorded the parts as MIDInotes, then re-tuned them so that the whole set could flow naturally.

All the music is then generated live in Ableton using 12 VSTs – lots of Polysixes and Junos – and one drum rack. Ableton is (still) an amazing, intuitive live sequencer… Live, I manipulated the synth sounds (there’s no pre-recorded audio in the set) and mixed and introduced the parts (or not) to build the the tracks according to how I’m feeling and how the room feels. Some parts didn’t appeal to me on the night so they were left out.

There are a couple of mistakes in this recording. The more I give myself to do, and the more live the performance is, the more mistakes I make… I’ve been frustrated with myself about that in the past but I’m learning to let go more and accept mistakes as a natural part of creating something in the moment with risks and challenges. Maybe some mistakes are better than the stuff I was intending to do anyway. That kind of thing happens in the studio all the time, so I just need to find that same confidence and openness when there’s an audience.

What were the other highlights of Freerotation for you this year?

I spent a lot of time in the yurt! Artists are taking that space really seriously and put a lot of effort into their sets. Donato Dozzy played a three-hour ambient live set in the yurt this year, using his wonderful field recordings and brand new material, some from his extraordinary forthcoming LP on Further, and Surgeon played another inspiring, brain-melting set. This time entirely on his Buchla Music Easel. Lots of intense drones and some really delicate melodic sections.

Objekt’s closing set was amazing, Burnt Friedman was shockingly good… so many… Dan Bean (of Bleep43) and Jane Fitz’s sets in the yurt were great, too. Educational.

Last year’s Weaving album from you was one of our favourites of 2014, how did you come to work with Further Records?

Thanks for the support! Mark and Chloe (Raica) from Further saw me play a live set at a Bleep43 party at Corsica Studios many years ago and got in touch. They’re amazing, and gave me so much freedom and space. Chloe’s LP is incredible, definitely someone to watch. In fact, I’d love to see her play in that yurt!

Were you pleased with the reception it got?

Not half. It was amazing! I’ve had compliments from people I massively admire and it’s very exciting and rewarding finally getting that music out there. I’ve been longing to have a project where I could make this kind of music for more than a decade… Further inadvertently gave me that opportunity.

Will you be releasing more material with them in the future?

Yep, for sure. We’re talking about another LP at the moment – hopefully it won’t take as long as the last one… I’m not exactly known for rushing things… I’m also working with another label who are planning an interesting project, but that’s all hush hush for now.

Finally, can you tell us what to expect from the Bleep43 crew over the coming months?

We’re planning more AV shows with Anthony Child (Surgeon) and Ali Wade in the UK and maybe overseas, like the South Bank show we did in May. Emile (Plant43) played at Berghain earlier this year and he’s playing the Mugako Festival in Spain in October (and I’m tagging along, as usual). He has a load of great unreleased material he’s been working on over the last year or so for live shows that he’s working on completing now. Dan Bean has a regular slot on Intergalactic FM and he’s currently playing monthly at Spiritland. He’s also playing at the Green Man festival in August. We’re also slowly starting work on our next EP. Don’t want to rush it, though.