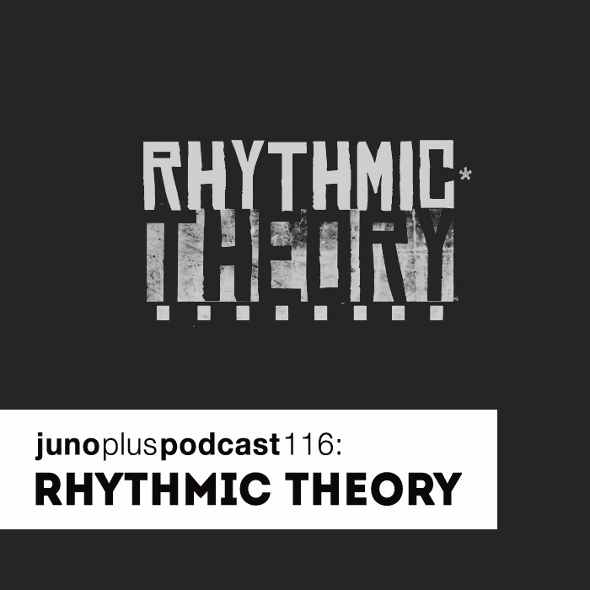 Prepare yourselves for 70 murky minutes of sub-heavy sounds mixed by the man from Bristol.

The fact we’ve fielded several mixes from Bristol-based artists and DJs over the duration of our podcast series thus far is a reflection of the city’s enduring musical health. It’s no coincidence that these mixes from Ekoplekz, Hodge, Ishan Sound, The Kelly Twins and Don’t Be Afraid boss Semtek have been among our favourites in the series too. We can add to this list Rhythmic Theory, a man who has committed a wealth of sub-heavy material to local Bristol labels since first surfacing on Chris Farrell and Shanti Celeste’s BRSTL back in 2012 with the Twilight Distinction 12″.

Whilst his background remains something of a mystery, there can be no denying Rhythmic Theory’s potency as a producer who channels the soundsystem heritage of Bristol into a brand of heavyweight corroded techno that sounds thoroughly fresh. Having recently inaugurated Berceuse Heroique offshoot Ancient Monarchy, this year will see a debut Rhythmic Theory album surface through Idle Hands whilst the producer also has material forthcoming on Blackest Ever Black’s A14 series.

What better time to reach out for a mix from Rhythmic Theory then? Among the 72 odd minutes of music contained within his submitted selection you will find a rare airing of R&B, a studio collaboration between Rhythmic Theory and the perma-smiling Bruce, forthcoming Kowton, cuts from Joey Anderson and Omar S and hints of the aforementioned upcoming RT material for Idle Hands and A14. We also secured a somewhat rare round of questions and answers with Rhythmic Theory covering how he came to work with Bruce, what to expect from his upcoming debut album and the influence of jungle in his productions.

Thanks a lot for this mix, what can our listeners expect?

A mixture of forgotten classics, music I have been enjoying lately and a small nod to what I like to play out in the latter half.

We note with some intrigue that it features a track made by yourself and Bruce! When did the pair of you start working together?

That track was actually made a while ago, I think before the hook up he had with Hessle. I’ve always been quite fond of it, I think he likes it to, but we just haven’t ever sent it anywhere and I just keep it for playing on dubplate. We ended up hooking up because he sent me some of his tracks, there’s another I play a lot called “Age”, which should be released, it’s fantastic, probably the best thing he has written, in my opinion.

So far your music has almost exclusively appeared on Bristol labels. Would we be right in thinking you have some heritage in the city?

Hah, yes I have been lurking in the shadows for quite some time, I don’t shoot my mouth off about it, I like to just get on with helping people in anyway I can to nurture our local scene (there are many like-minded people you guys know nothing of that keep all this ticking over!). I moved here in 1998 and, not long after, started getting involved in various ways, have done ever since.

I’ve mainly released on Bristol labels because I prefer to release my music through friends, Chris (Farrell) has been a big supporter of my music for a long time and I really appreciate that.

Is there any reason why you choose to keep your music local? Do you find that the city has an influence on your music?

My music doesn’t have to be just through local outlets, I just like to know about who is releasing my music, how they are going about it (manufacture wise) and their reasons for doing so. I’ve run a lot of labels over the years so I guess I have in my mind what is the right way to go about things, when I meet like-minded people that’s what I can work with them. I don’t do this as a career so I can afford to be patient (might be my age too!).

As for my beloved Bristol, yes it has a massive influence on what I do, I’m a great believer in the effect environment has. Bristol rains a lot, plus there’s a massive dub influence. I love moody music with a lot of sub. As many other people have intimated it’s a small place (given its population) with a good collection of like-minded musicians that feed off each other.

How did the hook up with Berceuse Heroique’s Ancient Monarchy label come about?

That came about through Jake (Hodge), he said I should send them some music. Giz seemed to like what I sent and we went from there. He has very similar taste in music to myself and certainly a very similar idea on how to approach things.

Have you met BH man Gizmo?

No and this is a bone of contention actually, twice I’ve lunched him out and that is so rude. Giz, I’m taking this moment to publicly apologise. Don’t hate me, love me.

There have often been references made to the influence of jungle in your music. Is that a significant inspiration for you when you hit the studio?

Jungle will always be a big influence on me, it’s what I grew up with, and it’s what I first went raving to. Specifically DJ Crystl, his mixture of melodies with tough drums and sub has informed a lot of the music I write. While it is an influence, I don’t want to just replicate what’s come before. So I (and many other locals) have been writing what I guess you class as techno music that touches on that 94-96 golden era in terms of mood but at a lower tempo, with an emphasis on sub and percussion (although not strictly, I like a good pad).

We noticed that you have started a mid-week monthly event with Facta called Metro. What’s the idea behind the night? And how has it been going so far?

Yes, Oscar and I decided we wanted to have somewhere to try out some of the above mentioned music people are making here and also to act as a place to get people meeting up and collaborating, maybe help this sound grow a bit more. There’s not that much of it released as yet but there’s plenty being made, although not enough to cover a full night as yet.

How did you hook up with Facta?

Oscar and I met through Chris Farrell, his first release was through Idle Hands.

So we gather that you have an album coming out later in the year. Could you tell us a little bit more about the release, what we can expect, and the process behind making it?

Yes, this will be out in the autumn on Idle Hands. I really enjoyed the process, so much so I have found it difficult to go back to writing singles. I wanted to create an album with a narrative, not just a collection of tracks like most electronic albums, which I think I have achieved, so I’m very happy with it. I approached it one week after Christmas before I was back to work (I have a quite demanding 9-5, this impedes music a lot!). I wrote eight tracks and used seven of them, I think that comes across in the cohesion of the album as a whole. I mixed the album down at a friend’s studio in Bristol, I have a half decent one myself but his is a professional studio (Matt Sampson, Bristol) and he has access to some pretty interesting and rare stuff, it helped add an interesting character and tone.

How has making an album impacted on your studio practice since?

Opened my mind a lot in terms of what can constitute a piece of music. I would always look at a track in terms of traditional club structure and length, which would mean some great three minute ideas chucked. Now I’m like, you know what, that’s all that needs to be and it works.

It looks like you have some material coming on Blackest Ever Black too?

Yes, I met Kiran through Chris, he sent him “Future Tense” and he got in touch about doing a release for them. Spirits of Duality / Forgotten Realms should be out during the summer on their A14 series.