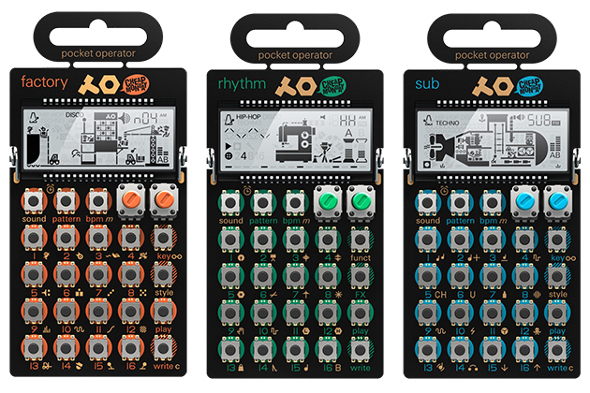 Teenage Engineering caused a stir back in 2009 when they released the highly flexible OP-1, a product that managed to pack a synth, sampler and sequencer into a decidedly cute shell. The Swedish company have now come up with a series of products called Pocket Operators which are high on functionality, fun to use, and priced to spread the joy of music making to a wider audience.

The PO-12 is a mini-drum machine and sequencer that features 16 individual drum sounds and a 16-step sequencer. With 16 performance buttons, six function buttons, two encoders and a LCD display, there is a huge amount of control at your finger tips for such a small product. Visual feedback on all three machines come from a calculator sized display that depicts operation in an entertaining way; for example on the PO-12 the drum machine, operation is shown as a sewing machine being hammered by what looks like a train driver.

The drum sounds are slightly better than you would expect for such a tiny instrument, and the kick is probably the best of them, while the rest sound like Nintendo chip tune. There are, however, a couple of parameters for each sound that can be changed using the two encoders that control pitch and decay. You can save up to 16 patterns that can be recalled immediately whilst holding down the pattern function key with one of the number keys 1 to 16.

Next in the series is the PO-14 (sub) which is a bass synth with a built in sequencer. There are 15 gritty bass patches and effects to choose from with a percussion kit on patch 16. All of these are accessible and editable using the mini buttons and encoders and include the 16-step sequencer with memory for 16 patterns. The sounds on this unit are deceptively deep, and for bass sounds you won’t be disappointed with the choice of waveforms on offer. 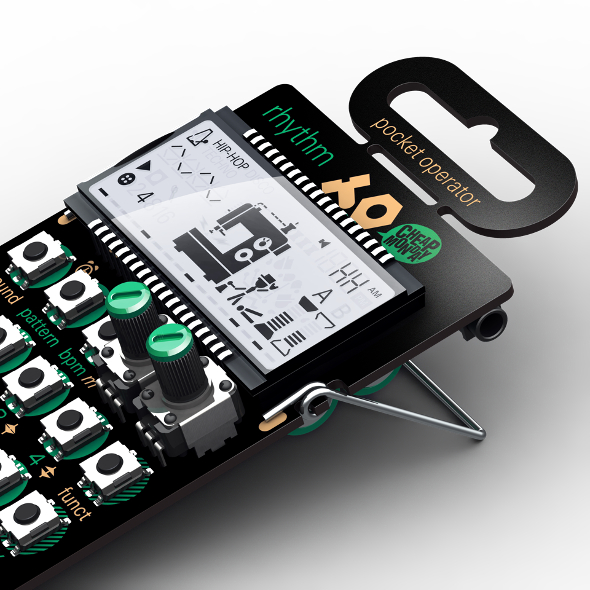 The final unit in the series is the PO-16 (factory) which acts as a simple lead synth. It contains the same features as the other two including a percussion set on patch 16. The lead sounds are varied and include plenty of grimy analogue style noises as well as pure bell like tones.

The three instruments share a lot in common. The sequencer, for example, not only includes note information but allows you to record parameter locks for both the parameters controlled by the encoders as well as the comprehensive FX that all three units feature. Designed with performance in mind, there are filters, beat slicers and bit crushers similar to what you might find on a more involved DJ mixer, and it’s with these features that the Pocket Operators really come to life, and furthermore, start showing their incredible value for money.

These mini synths are not simple stand-alone machines (although they can be if you prefer) and it’s possible to synchronise all three so they can be played together. There is a little bit of menu fiddling to assign each machine to the correct sync number, however the added bonus is all three machines will send their audio output signals to the final unit in the chain. This is convenient because it means you still only need one stereo mini-jack cable to get sound from all three synths. It’s not just the other Pocket Operators that you can sync too either. If you own an iPad or iPhone and use it with an app that allows syncing, you can use it with any of these mini-synths; similar to Korg’s range of Volcas.

Some might be put off by the flimsy looking exterior which resembles a half finished circuit board, but despite its looks, it’s only the wire stand of the PO’s that’s flimsy, with the rest of the unit feeling solid. If you are worried, Teenage Engineering are bringing out a hard case for each one.

It’s doubtful that you will be making slick, professionally finished productions on these synths, however you will be having a lot of fun.
More info/buy