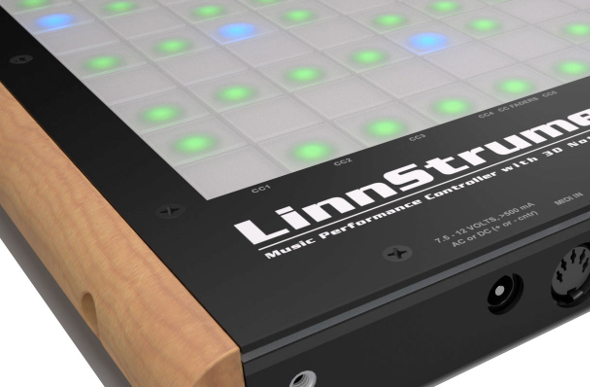 If you’re to consider the visionary role Roger Linn has played in helping design and develop modern music, the feverish levels of anticipation surrounding the newly launched LinnStrument MIDI controller – Roger Linn’s latest product design – is more than warranted. Some of Linn’s previous creations are iconic pieces of studio gear, not least the ubiquitous Linndrum which has become synonymous with electronic music from the ’80s. With the company’s flair for studio gear innovation still present, Linn now enters the MIDI market.

On first inspection it’s clear the LinnStrument isn’t your regular MIDI controller. It’s not just the elegant, wood design and sheer size of the thing, but its tangibility and visual identity. After striking the first note it feels as though it’s a design made to respond to completely different needs of musical expression than those currently catered for by the majority of controllers currently on the market.

Unlike most other MIDI interfaces, the focus here isn’t so much on emulating standard keyboard playing, or facilitating tactile manipulation of software parameters like volume, filter, reverb, etc. Rather, it’s about harnessing heightened musical expression that can pour from a performer hands, adding extra nuance and further variation to a MIDI signal.

It’s much easier to imagine this device being used as a real instrument, either live in concert or as a studio tool for composition, and it’s clear there’s more nous to this machine than serving functional dance music. It would, however, bring something of value to that experience by the sheer addictive and intuitive musical quality it offers the user.

After switching on the LinnStrument and playing around with the touch-sensitive grid – immediately ruling out the uninformed assumption that this could be some sort of fancier Ableton Push-like solution – I immediately felt an extra ‘something’ was added to my exploratory noodling. The usually flat, overly digital shriek of the philistine plugin I’ve deliberately picked to test the Linnstrument quickly becomes something much richer and pleasurable, emitting a sound you could imagine coming from an early digital synth like a Korg Trinity or a Roland JD880.

From a purely performance perspective, what really sets the LinnStrument apart from most other MIDI interfaces is its grid-like surface. It doesn’t only gather information about pressure and length, or the note itself, but pitch and timbre can be affected by sliding your finger left and right or upwards-downwards across the grid. This allows for expressive results of a more organic feel in the way you can make vibratos or chromatic slides – depending on how you set your pitch bend range in the Per-Split settings.

In terms of composition, the grid is arranged in a way that’s closer to a stringed instrument, with chromatic rows set up like the arm of a guitar – Roger Linn is a guitarist himself. This makes it easier for non-musicians to feel their way through the notes intuitively, and a light guide can be set up to show the notes you wish to play. This, ultimately, allows for extra (non-virtuoso) improvisation where arpeggios and sequences can be formulated and changed on the fly in real time.

The grid can virtually be split in two, with each half having its own group of adjustable settings; you can choose to have both splits present on the grid or go from one to the other quickly using the ‘Split’ button on the left. To fully take advantage of this system there are Per-Split settings covering parameters such as MIDI definitions, pitch bend, light colours and timbre. It is possible to use the bottom row of the grid on each split as an immediate access point for options like arpeggio and a few after touch possibilities too.

Although there are various MIDI options on each split, you can customise the grid even more by assigning different channels to different rows, making it possible to play with various instruments simultaneously through MIDI using different areas of the LinnStrument.

The Global Settings offer adjustment options for the arpeggio, pressure sensor, tempo tap and the lights on the grid which help define exactly which notes are highlighted. This creates an incredibly precise system of visually guided playing. There’s also the option of assigning the two “Switch” buttons to a choice of functions.

The possibilities of this machines are literally boundless, and the LinnStrument has the potential to be a true game-changer, not just in a live context but also in the studio.
More info/buy