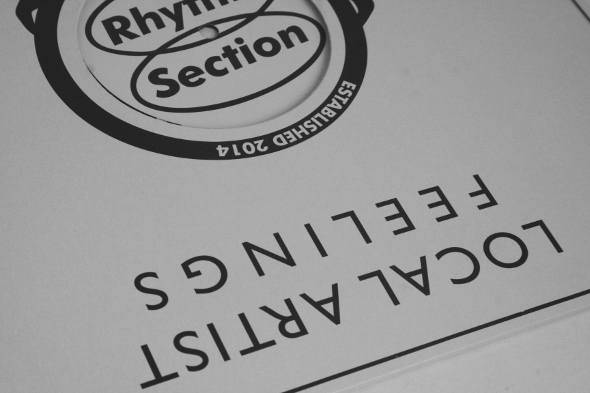 The appeal of Vancouver’s Mood Hut umbrella crew to a post-Plastic People London landscape is a fairly understandable one. The running together of influences from jazz, ambient, broken-beat, and dub to create a kind of house-focused groove is close to an ideal for esoteric DJs, so no surprise that guys like Floating Points, Brian Not Brian or Ben UFO have been quick to rally their support for the cluster of musicians. The past couple of years has seen Peckham-based Boiler-Room man Bradley Zero similarly falling for their company and the charm too, with more than a handful of the Rhythm Section parties he runs featuring one artist or another from the orbit. Generally focusing on the performative ability of head Mood Hut man Jack Jutson or his group the Pender Street Steppers, but giving coverage to others too. 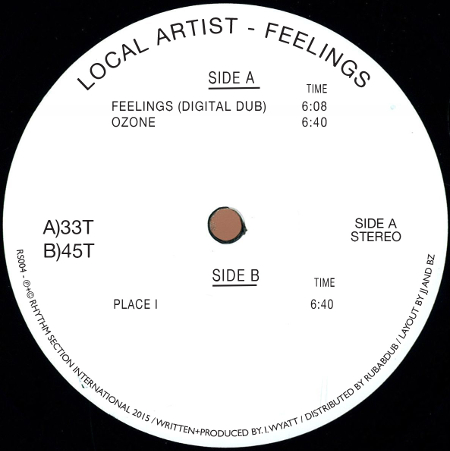 The latest offering on his Rhythm Section record label sees Zero highlight a Vancouver artist whose portfolio is a little smaller in the shape of Local Artist, a producer last heard on a short-run debut on the Proibito label run by Anthony Naples. Local Artist falls slightly closer to a ‘broken beat’ kind of house, with a whiff of the heavier ends of Moodymann or Dez Andrés about his productions. The Proibito record was a gritty, low fidelity mover and shaker, track “Sun Raw” a stand-out for strangely flattened percussion caught in communication and occasional heavy Vainqueur-style dub chord stabs. Feelings feels like a hi-res upgrade in many ways, bringing a similar approach but with an added flair and higher production values.

Through the first two tracks on Feelings the drums feel remarkably composed for such chopped up, broken beats. Though it’s Deep House tried and true, it also resembles the twisted hip-hop Zero found and brought out of Al Dobson Jr. with those Rye Lane versions. “Ozone” shuffles into view and words like skank and funky bubble up horribly before being suppressed back down again. It’s the kind of flattened-out beatdown sound that Rhythm Section is making a name for, and it is infectious.

“Feelings” combines it with those deep dub techno chords; not exactly Basic Channel, more like the approximation of metallic dub techno sounds I and every other producer pull into their mind when someone says ‘Basic Channel’. It adds an attractively meditative quality, and pulls back from the precipice of Gilles Peterson funky shenanigans that the drums occasionally threaten to roll right into.

“Place I” takes a different tack, closer to tracks on his Local Artist debut and with a skeleton that, had I been presented it without comment or peripheral information, I would guess was hot from Terekke’s Octatrack. Repetition is much more heavily utilised, a small snatch of a vocal sample heavily looped and fired through a gauzy cloud of pads and tinkling crystal shards.