New XAMIGA material on the way Legowelt and Xosar are back behind the buttons together on new EP Bohemian Grove.

In 2012 when Sheela Rahman first emerged under the name Xosar, the San Francisco-born artist collaborated with Danny ‘Legowelt’ Wolfers on several records under a number of aliases. Our personal favourite here at Juno Plus was Pacific House, a 12″ for L.I.E.S. (surf house will never die!) recorded as the polyphonic loving Trackman Lafonte and Bonquiqui, and they also recorded together as XAMIGA. Allegedly named in honour of a baby tiger the pair met in Las Vegas at Siegfried and Roy’s tiger refuge, the XAMIGA project resulted in two 12″s and a couple of remixes.

Now a fully established artist in her own right, with the Let Go album for Black Opal amongst our favourite LPs of the year so far, Xosar is set to cross swords with Legowelt once more on a forthcoming XAMIGA EP. The four track Bohemian Grove EP is due to arrive via the recently established New York label Sheik ‘N’ Beik, a self-styled “mechanism filtered from the electronic ether,” previously responsible for issuing a 12″ from French L.I.E.S. correspondent Voiski. Due out in June, all four tracks can be heard in full below. 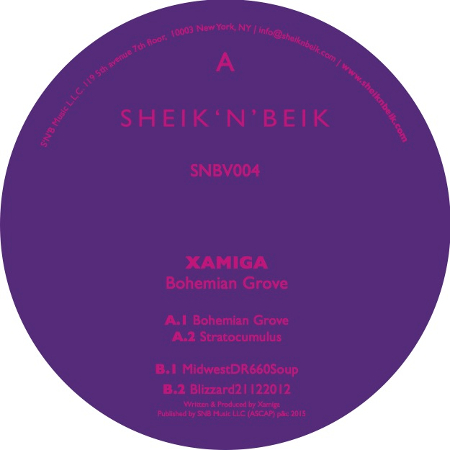 A1. Bohemian Grove
A2. Cumulus Versie
B1. Midwest
B2. Blizzard