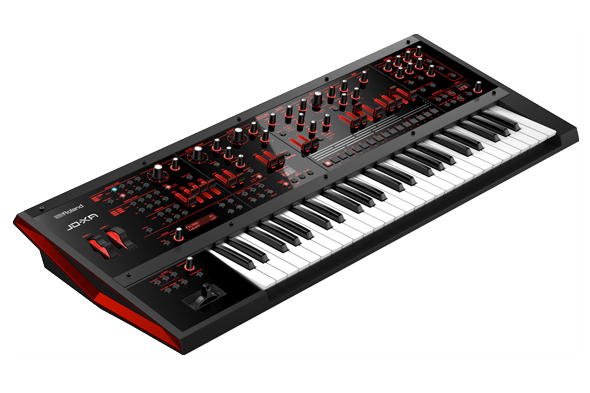 The unstoppable march of the Japanese hardware manufacturers yields a feature-loaded keyboard that gives the best of both worlds.

You would think Roland would be content to rest on their laurels for at least a day what with the much-discussed unveiling of the Aira modular series, which we reported on yesterday. The System-1m and its accompanying effects modules are enough for many gear heads to be chewing on not least because it raises the contentious issue of crossing over between digital and analogue domains, which gets some existing modular devotees a little hot under the collar. That said the System 500 being promised on the horizon should satisfy the purists, while equally there are many who see the benefits of combining both digital and analogue technology.

Roland however are charging ahead without concern as they announce the JD-XA synthesiser, which wears its hybrid credentials proudly on its sleeve. The first stage of the machine is a four-part “all-analogue monster” with 4-pole analogue filters and a dry output for those who want to sidestep any digital interference. The next half of the synth is given over to a four-part digital engine and a range of effects, giving greater scope to alter the sounds coming out of the JD-XA whether you keep the analogue and digital parts separate or bring them together.

The potential to shape digital waveforms using the analogue filters is certainly a noticeable benefit of embracing both the old and the new with this machine. There are no details on price or release date for the JD-XA but the full specs can be perused over at the Roland site and there is also a video – replete with music reminiscent of the Blade OST – to watch below.