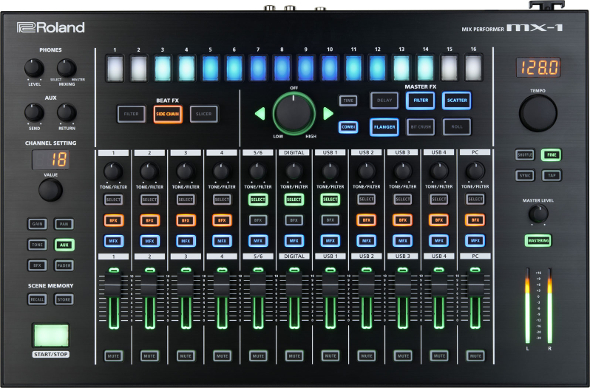 Rob Lee hooks up Roland’s MX-1 Mix Performer to Ableton and takes the hybrid 18 channel creative station for a spin.

Nothing seems to have sparked the imagination of DJs and producers more than Roland’s production hardware. The new Aira range fills the aching thirty year chasm left by Roland after stopping production of the TR-808 and TR-909 drum machines, and acid mothership, the TB-303. The Aira family has managed to straddle the near impossible task of emulating its legendary lineage of machines whilst fitting in with the current musical landscape.

For those not yet familiar with the Aira instruments there’s the TR-808/909 drum machine reboot, the TR-8, the upgraded TB-303 bass synth, the TB-3, vocal effects tool, the VT-3, and the System-1 keyboard, a new piece of kit with roots linked to Roland’s System 100 synth that was first released in the ‘70s. Additionally, Roland have also introduced a sync box called the SBX-1 which gives pre-MIDI analogue synths the ability to talk to modern digital synths, DAWs and drum machines via USB, MIDI, DIN SYNC and CV/Gate.

With all of this malleable music making equipment, how are you going to effectively frame your production endeavours? The MX-1 Mix Performer is Roland’s answer, and effectively, it’s an 18 channel mixer that’s been streamlined for use in a live/DJ environment. It includes two built in effects processors with step sequence, transport, tempo control and DJ style cueing that allows you to monitor a channel in the headphones before bringing it into the mix; useful when jamming with multiple sound sources live. Furthermore, there are four USB ports for hooking up other Aira gear. 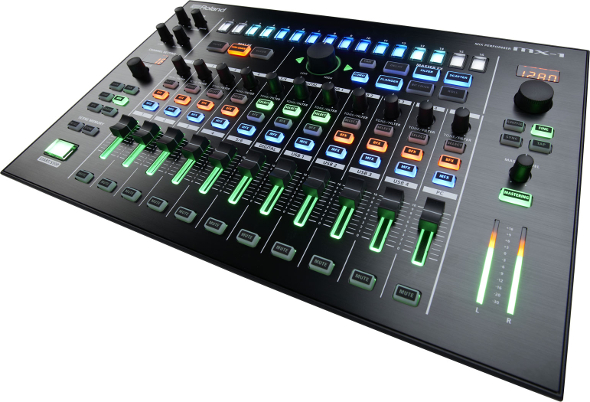 For this review, I made use of a TR-8, TB-3 and Ableton, all hooked up to the MX-1 via USB with the tempo generated by the MX-1, with all of the other units synced by my DAW. Whether you are using Windows or Mac OS, you will need to download and install drivers, which are freely available from the Roland website. A little bit of setting up is required for your computer to communicate with the MX-1’s channels, but instructions on how to do this are quite clear and easy to understand.

The layout of the MX-1 is as simple as it gets. Each channel fader is underlined by a mute button and headed by a tone/filter knob. There is a selection button that allows you to monitor the channel in your headphones (with beat FX and master FX implementation controls), before raising the fader and sending it to the master out, and all buttons are backlit making it easy to navigate in dingy clubs spaces or darkened studios.

Hooking up your Aira equipment is fairly simple and only requires a USB cable to connect to one of the four dedicated USB ports at the back. As if by magic, both the TB-3 and TR-8 are synced to the MX-1 immediately without the need to delve into any annoying menus. With a few simple loops being played via Ableton, it took no time at all to get into the creative flow.

With automated filtering, programming beat effects using the built in step sequencer really opened up the live production possibilities. There’s a slicer for adding grainy jitter and a sidechain that can all be programmed on the fly using the simple step sequencer buttons, of which there are 16. It doesn’t take long to get the hang of the 16th note rhythmic sub division – if you haven’t used it before – but veterans will, no doubt, be well versed in the classic 808 sequencer style.

The master FX adds a delay, flanger, filter, scatter, bit crush and roll functions to the party, with a single knob for controlling the intensity of each one. In Combi Mode you can use the step sequencer to add delay to a single snare hit or bit crush half a bar of your sequence, for example. As I played with each parameter I found myself getting inspired by the possibilities that would open and scatter in front of me.

If there was ever a simple way, using both software and hardware in a tidy set up, to organise and deliver a live/DJ set inspired by the likes of A Guy Called Gerald or KiNK, then this is surely it. It isn’t just a performance tool either. If you want to use the MX-1 to control 18 channels of your music production software, you can do so in external mode, or alternatively you can use it as a controller for production software such as Ableton Live via MIDI.

If you are looking for deeper mix control, it’s possible to adjust the gain, pan and fader curve of each channel along with an auxiliary send, beat FX intensity and also the nature of the tone/filter knob, which includes a low pass filter and various tone controls you can use to add warmth or sparkle.

The MX-1 has features you might find on some of the higher end Pioneer DJ mixers, as well as the FX step sequence capabilities sometimes found on pricier boutique effects units. It shares the solid look, but soft and fluffy tactile controls of the other Aira machines with the addition of being a flexible tool that can be used for more than one application.

With the built in FX, however, it is possible the MX-1 may sound dated in years to come (maybe they’ll decide to swap out the built in FX for interchangeable FX slots with downloadable patches in the future), but the MX-1 is a truly versatile piece of kit. It is as a live performance tool that can really come to life, and in conjunction with the other Aira instruments it creates possibilities few, if any, other machines can.