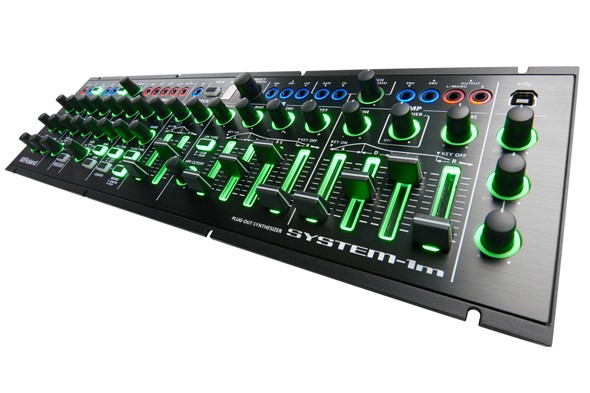 The Aira series promises a Eurorack-compatible “modular for the masses”.

Last year’s launch of the Aira series heralded a decisive comeback for Roland in the hardware market. The TR-8 and TB-3 were the most talked-about models in this new line of equipment, updating the iconic TR-808 and TB-303 respectively, while additional bits of kit included the VT-3 vocoder and System-1 synth. The System-1m is the latest addition to the Aira range and taps into the increasing interest around modular synthesis, a form of production preserved by the most devout of hardware hobbyists and sound scientists, however these days it’s hard to spy a major festival line-up without some kind of modular performance.

Few would deny from the outside that modular synthesis seems like an impenetrable field, but the newly unveiled System-1m plug-out synthesiser and accompanying effects modules could provide a more accessible route into the murky world of patch cables and Euroracks (the most popular modular system at present). Roland’s new designs are compatible with the Eurorack system, which means their equipment can be incorporated into existing set ups as well as affording new modular devotees the opportunity to expand upon the foundations the Roland hardware will provide.

As well as the System-1m, the four effects modules announced are the bit-crushing Bitrazer, the Demora delay unit, the Scooper scatter effect box, and the Torcido distortion (pictured below). For those unsure about going fully modular, these units will work as standalone table-top devices, and Roland have also included Smartphone and tablet compatibility which should open up the way modular hardware can be performed. There is no release date confirmed for the equipment yet, but you can get a visual taste for the unit’s possibilities in the Aira video.

Roland will release the System-1m and their new range of modular gear soon which will be available to purchase at Juno.