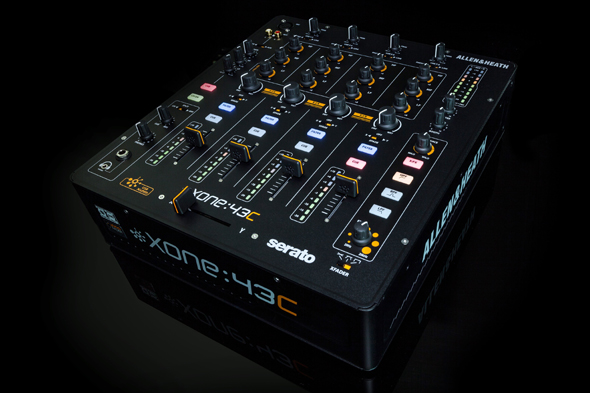 The latest DJ mixer from the British manufacturers is designed to fully integrate with Serato.

With the Chrome update on their GLD series of live mixers unveiled just last week, Allen & Heath are most definitely on a roll as they stride into 2015. The Cornish mixer maestros are seemingly on a quest to cater for every possible subdivision of an increasingly fractious market, whether it be managing the sound needs for a toilet circuit venue or a stadium, the booth requirements for a superclub or the perfect battle set up for a bedroom turntablist. It has been merely weeks since we reported on the release of the Xone:43 mixer, which builds on the sturdy reputation of the Xone:42 with a few cosmetic adjustments.

Now those DJs who co-ordinate their musical arsenal through Serato have a more specific solution on offer in the shape of the Xone:43C, a mixer fully designed to integrate with the digital system without the need for an external audio interface. Ask anyone who has had to install their soundcard in a dingy club in the middle of the night, or had their set interrupted by someone else going to task with the rear end of the mixer, and all will concur it’s one of the biggest pitfalls of digital DJing in the field.

With a 16 channel soundcard built into it, the Xone:43C will work instantly with any Serato DJ Club Kit and DVS system, while there is also plug n’ play capabilities for the A&H Xone:K controllers without the need for an additional USB port. Combined with the usual build quality and those ever enticing analogue filters that come as standard on their mixers, it seems this latest installment in the Xone series may have a sizable impact on technical logistics in nightclub set ups as well as embracing the creative potential of the digital approach to DJing. A video from Allen & Heath further explaining the mixer’s features can be viewed below.

Allen & Heath’s Xone:43C retails for £799 and is shipping immediately.