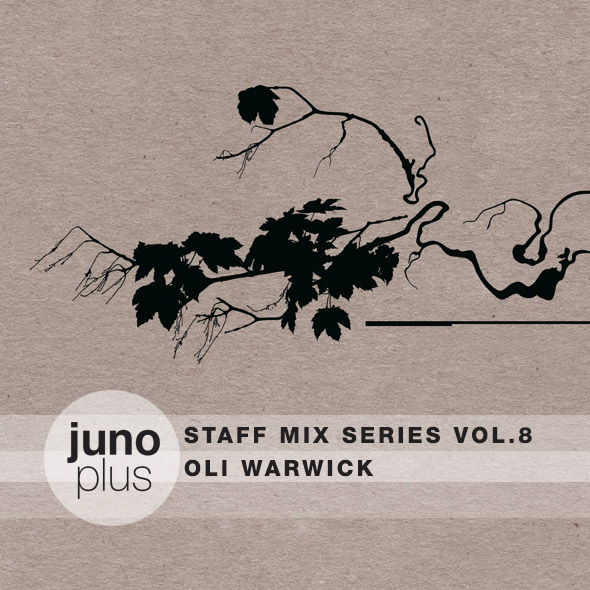 Our new staff writer Oli Warwick steps up to the Staff Mix series for almost 90-minutes of selections peppered with some interesting spoken words.

I always prefer some kind of conceptual angle when approaching a mix, however vague or abstract it may be. When it came to delivering something suitable to the Juno Plus Staff mix series, there was of course a certain freedom afforded to the task by virtue of the wide-ranging editorial line, so I had to think up my own limitations to push up against. That said, I also wanted to keep options open and deliver something less contrived and more instinctive, which led me to setting the goal posts in the amorphous grey area known as ‘records I own that are in some way linked to Juno’.

Some records I have reviewed for Juno Plus, some are by people I have interviewed for the site, some are on labels I have covered for the site, some I bought on Juno Records as a result of doing product descriptions, and one or two I bought years ago but feel they have some particular spirit which compelled me to include them in the running. That left the options nice and open to pick a fairly instinctive path through a bulky stack of records, which I now present to you as a one take shakedown, wobbly bits n’ all.

Having done the hard part, I also struck upon the idea of digging into my archive of interview recordings, specifically picking out interviews conducted for Juno Plus from unnamed artists and general music bods. It’s a little sonic decoration that in most places can’t really be deciphered for all the delay and reverb, but I felt it added some weight to the rather flimsy “Juno-y” approach I had struck upon, and if you strain your ears you might get a chuckle or two.