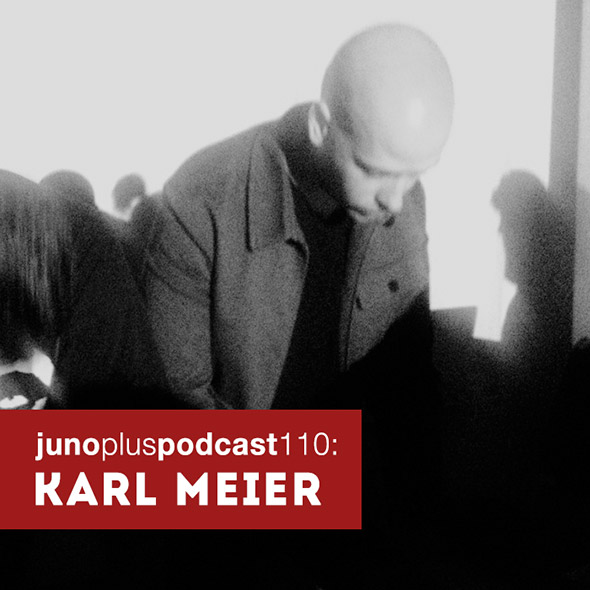 The man from Talker throws down a mix encompassing three decades of electronic music that features more than 70 tracks.

The idea of getting a mix from Karl Meier stemmed from the recent feature on his partner in Downwards act Jonathan Krohn. Speaking with Nic Touhey, Krohn said Meier was the friend that would drop into his basement when he and his friends were listening to music saying something like: “you gotta check this out”. Add to this, Meier’s two decades experience of DJing in the US and it made us think getting a mix from him would be an interesting exercise. Luckily for us Meier was open to the idea but we were not quite prepared for what the Chicago selector ended up submitting.

Clocking in at just under three hours and featuring over 70 tracks, Meier’s podcast is a masterclass in mixing that features a wide range of music past and present. As Meier tells us matter of factly below, “I can’t see the point in playing three hours of any one style, period.” Prior to working with Krohn as Talker, Meier’s most recognised contribution to the techno canon was one of the best 12″s in the Sandwell District discography; Born Against by Kalon. For whatever reason, Meier seems quite reticent to discuss that record in great detail but he was more than happy to talk about how electronic music ‘ruined his life’, what we can expect from Talker, and life in Chicago in general.

Thanks for the mix, it looks like you had fun doing it, almost three hours long. What should we expect?

Thanks for asking me, thrilled to contribute to the podcast series! As far as the mix is concerned, it’s fairly diverse, some techno and house as well as some more listening-oriented material as well. I didn’t intend for the mix to be as long as it is, and perhaps it’s asking a bit much of people to devote that much time to listen to it. However, I think there’s enough going on to keep peoples’ interest.

How was it mixed?

It was constructed & assembled in Ableton Live 9. I did it in one take, using an Allen + Heath Xone controller.

In your email sending this mix to us you wrote, “What can I say…I got ‘in the zone’ and lost track of time!” Where and when was it recorded?

Yeah, I’m sure this is something most DJs can relate to – whether you’re recording a mix at home or playing in front of an audience, you just lose all track of time, really. I recorded it at my apartment in the Logan Square neighborhood of Chicago about two weeks ago.

There’s a great deal of genre crossover in here – too much to even articulate really – but scanning through the tracklist there’s Clock DVA, SUED 12”s, old KMS, Norman Nodge material, Mumdance & Logos…. Is this representative of a long haul Karl Meier DJ set?

Obviously, a narrative quality is important, and if I’m playing a longer set, I like to play some Chicago and Detroit stuff, some electro and UK bass material, melodic stuff, some hard-as-nails tracks. I like to hear other DJs do that as well. I’m not trying to be willfully difficult at all, it’s just that I really feel that the true art of DJing lies in recontextualizing music and showing people how all of these various sub-genres of dance music can fit together.

You are also responsible for that great Kalon 12” on Sandwell District. What’s the story behind that record, and alias. There’s a rumour it was made in a kitchen on shitty speakers, is that true? Will Kalon remain a one off?

I can’t really comment on the Kalon project, really. It was just a one-off, yeah. It’s great that it’s resonated with so many people, though – it sounds great on a rig, and it’s one of those functional records that stands on its own as well. It’s not just ‘cannon fodder’.

In a recent interview with Jonathon Krohn, he said you were the guy always bursting down into the basement to show him new records. What’s your take on that?

There might be some truth to that. Electronic music ruined my life, I might as well ruin his life too, right? All kidding aside, it’s nice to hear that. I was pretty passionate about electronic music then, and I don’t know that much has changed, really. I still am, and he is as well. I was really fortunate to have a few people in my life that acted as a mentor and helped shape my personal aesthetic at a formative age, and that’s so important. I’ve worked in record stores and distros all my life, and the best part about working in those kinds of environments (by far) is sending people down another path they wouldn’t have discovered on their own.

How are things going with your Talker collaboration?

Good, thanks – we’ve actually got a several remixes lined up – all should be out this spring sometime. We’ve done a remix for Israel Vines’ excellent debut for Eye Teeth (which is a new Interdimensional Transmissions sub-label) which will also have BMG & Silent Servant remixes on it, plus a remix for a record that Israel’s done wwith our old friend Kit Geary for Horizontal Ground. Both of these are probably some of the most ‘floor-friendly’ work we’ve done yet – I’m quite happy with how they turned out.

We’ve also done a remix for a new project called Birds Of Prey, which is pretty different to anything we’ve done before. Birds Of Prey is a trio comprised of my good friends Eric, Camille and Grant – Grant does the excellent Mysteries Of The Deep podcast and events in NYC. This will come out on Kathexis, which is a new imprint started by Ricardo Donoso & Brett Tanrelo.

Outside of that, we’ll probably start work on a new release for Downwards in the next few weeks, and we are trying to work on a collaboration with Acteurs, which is Brian Case from Disappears and Jeremy Lemos – I really love what they do, and I think we could come up with something really interesting. Their releases on Public Information are just excellent.

Are you working on anymore solo material?

At the moment, no, but I’d like to. Hopefully this summer.

And how are things in Chicago these days?

Pretty healthy. Smart Bar is as good as it’s ever been, it’s easily the best club in the city. The staff are wonderful, the sound is great, and Marea Stamper (The Black Madonna) is the talent buyer – she’s done a terrific job with the bookings and creating a strong identity for the club. Jeff Derringer does the monthly techno night Oktave; he’s the resident there and he’s brought out some great DJs. Regis and DVS1 are guest residents this year, which is fantastic. My friends Nathan and Justin do a night called Hugo Ball there, which is my favourite club night in the city – a proper acid house vibe, really eclectic programming, and the crowd is always up for it.

I’ve been doing a monthly at this amazing bar/restaurant called Analogue, where they’ve given me the freedom to play whatever I want; anything from post punk to krautrock to electronica of all stripes. I really enjoy it. It seems like there’s lots of after-hours parties happening again – especially in Pilsen – and loads of people making great music; Chicago Skyway, Specter, Innerspace Halflife, Jamal Moss… the list goes on and on. Beau Wanzer’s stuff is always inspiring. He’s also behind this long-running night called Hot On The Heels Of Love at a bar called Danny’s in Bucktown, which is an institution, really.

Where can we see you play next?

We’re playing for the Surface Tension night in San Francisco next month on May 8 with Patricia – they’ve had some like-minded artists out like Ancient Methods, Prostitutes and Orphx, so we’re honoured and really looking forward to playing! Hopefully we’ll play some more gigs this summer as well.