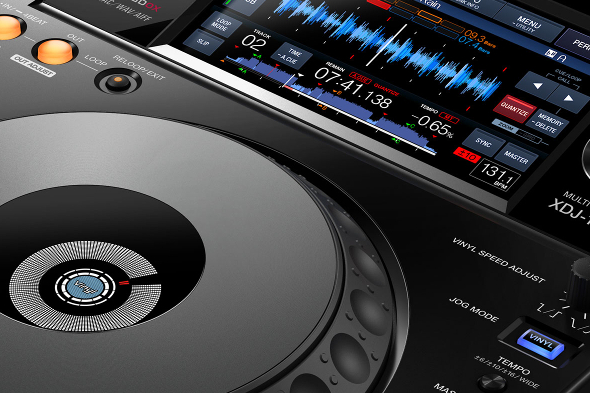 Rob Lee takes Pioneer’s new USB-only XDJ-1000 player for a spin and finds out if the lack of CD functionality makes a difference.

Say hello to the XDJ-1000, a digital media player that removes the neccesity of a CD drive which is something of an inevitability for those who have not strayed into the realm of laptop DJing. The migration from CDs to USB storage devices has been helped along by players like Pioneer’s current family of CDJs. Most CD players aimed at DJs feature a USB port as well as some kind of music management software; Pioneer has rekordbox, a way for DJs to prepare their digital music at home or in a studio before entering the DJ booth, preparation that might include setting hot cues, loop points and playlists and transferring music to your USB device.

The XDJ-1000 is a good deal lighter and less cluttered than any of Pioneer’s CDJs. As well as having done away with the hardware needed to play CDs in the first place, Pioneer has moved a lot of the more advanced controls on to the large touchscreen display. The 7-inch touchscreen includes all of the features you would expect to see, such as waveform display, title, BPM and key information as well as a lot of the function buttons that allow you to access tag lists, browse, menus and the ever present slip mode, loop mode, sync and master controls. One of the few additions is the new performance mode that allows you to create and store hot cues and looping cues, with the further possibility of beat jumping in increments of a single beat up to four beats either forwards or backwards.

One of the most welcome changes is the inclusion of a “QWERTY” style keyboard that pops up on the touchscreen in search mode. Previously I had to use the needle drop touchstrip to type in the title of the music I was searching for and it was always easy to make ham-fisted errors. This new keyboard makes the process much easier. However, one cause of confusion occurs when preparing hot cues and loops in performance mode. When you load a new song into the deck you would expect the player to either remove the previous cue points or revert to the ones saved with the track in rekordbox. However, it does neither of these, rather it plays the cue and loop points saved on the previously played track. In the heat of the moment this could be a confusing situation, and is a scenario we can only hope Pioneer will rectify with further updates of their rekordbox software.

Despite being a USB media player, laptop DJs haven’t been completely left out. The XDJ-1000 is MIDI compatible, meaning it can also control Serato or Traktor, and being firmly aimed at the digital DJ, the question that begs to be asked is whether the XDJ-1000 is bringing about the end of the humble CD? In terms of reliability, CDs haven’t always come out on top. Along with traditional laptops, CD players require a disc to actually spin and there have been many occasions when a CD has refused to play or a laptop has died mid-set. Vinyl lovers would argue that even if a record skips or a needle gets stuck, the music will still play. In my experience, playing from a USB device properly formatted for use with a Pioneer deck using rekordbox software has been by far one of the most reliable ways of delivering a DJ set. The only reason for carrying a case of CDs has been for the rare instances that the venue had the older CDJs with no USB feature; a scenario which seems to be increasingly rare.

However, it’s probably in the home where the XDJ-1000 will be most popular. It has all of the advanced features of the Pioneer’s CDJ-2000 Nexus for half the price, including the ability to load songs to the player via a router and a Wi-Fi connection with either a smartphone using the rekordbox app, or a PC/Mac with rekordbox installed – MP3, AAC, WAV and AIFF files are all supported but unfortunately not yet FLAC or Apple Lossless files. Current owners of the flagship CDJ-2000 Nexus will probably not feel the urge to spend a further £830 on a player that does the same job as the deck they currently own. Those that can’t quite stretch their budget to the Nexus but want the opportunity to practice with advanced features in a home environment, the XDJ-1000 represents a more affordable step into professional DJing.