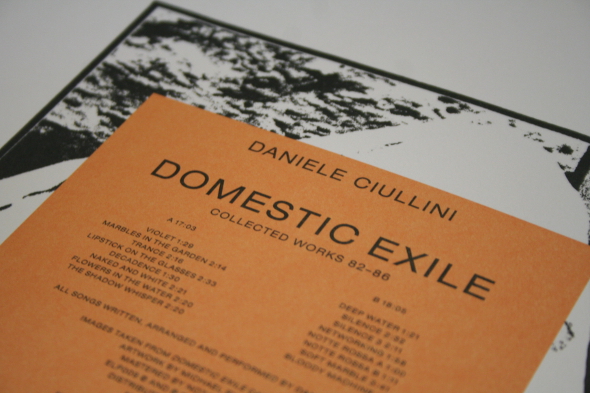 A few years ago The Guardian decided to run a series on Italian popular music, part of which involved an interview with Alessio Natalizia of Walls. Here Natalizia was asked about the differences between making music in Italy and in the UK. “What does Italian music sound like, anyway?” Natalizia retorted, adding, “we’ve never been able to take Italian pop music around the world in the same way we have with food.” After a few Walls and Not Waving records, and having curated the Mutazione compilation issued through Strut Records, here comes Natalizia taking Italian music around the world in the form of Daniele Ciullini with Domestic Exile (Collected Works 82-86). 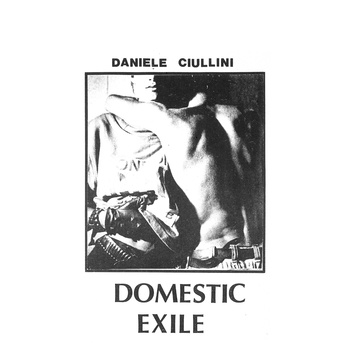 Released on Natalizia’s own Ecstatic Recordings, this retrospective includes Ciullini’s magnum opus – the 1983 30-minute self-released tape Domestic Exile – and another eight tracks taken from tapes here and there from the early 1980s, remastered and cleaned up for the contemporary ear. A member of the many-headed TRAX project who combined mail-art, design, music and indeed mail-music, Cuillini was deeply connected to the work of mailartist Vittore Baroni, the Florence punk scene and the team behind the dream of public broadcasting that was RAI’s programme Fonosfera. Ciullini collaborated on a number of wildly ingenious collaborations, some of which are also repressed here.

Writing about the album, Ciullini once explained how it was made in a room where his father used to design water turbines, which Ciullini later fitted out with portraits of Lenin, Marx and Che Guevara. He then emptied it out completely, installed his rudimentary ‘toys’ and made Domestic Exile. And in a sense, that’s how the record sounds. Domestic Exile is a cerebral and solitary distillation of a kind of spiky environmental music. Ambient for a small, white room, a room where you can feel the grain of the walls, the grain of time, and your own heartbeat.

The record’s first track, “Violet” – rusty but spacey at the same time – is an introduction to the echoed and tinny sounds that reappear time and again in Domestic Exile, overlaid in the thumpy, dense punches of a TR-606 drum machine. The most forceful of these moments – “Marbles in the Garden” and “The Shadow Whisper” – could be club tracks suited to an obsessive, minimal dance. The most delicate, romantic turns, such as “Decadence”, move into a kind of industrial-indebted auratic and even cosmic-tinged atmosphere. In fact, although the concept of the album is a kind of bleak isolation, the sonic concept and the equipment has something stellar about it, something like hearing stars colliding.

Variating on a series of themes – minimal, quasi-geometric patterns in which a drum machine, a modular synthesizer and a heavily reverbed guitar step in and out with each other – Ciullini’s sound is a sort of brutal ambient, artisanal-punk, but almost digital in sensibility. “Naked and White” is a ghostly fugue, with crystalline sounds variating ever so slightly on a simple melody, underpinned the whole time by a thick, dark bassline. “Lisptick on the Glasses” distorts something almost like a police-movie sound into a mercurial, shifting, complex.

Highlights from the precious scattered material lovingly preserved in the second part of the LP include “Silence”, a rhythmically easier but extremely atmospheric piece and the sophisticated “Notte Rossa” tracks, part of a wider TRAX project which invited artists sending each other unfinished tapes and overlay tracks one upon the other. The second part is precious because we hear the musician work with other, sometimes more sophisticated instruments – the meditative, fluttery electronics of “Networking” are a testament not only to an evident flair but also to a kind of research, which, thankfully, Ciullini has recently begun to undertake again.

On the almost shoegazey “Soft Marble”, before the opaque drones of “Bloody Machine” which close the LP, Ciullini depressedly croones ‘nobody will open tomorrow’s door’. Not true. Here we are unearthing some of the most glorious segments of home-made Italian music and, indeed, ‘taking it around the world’. If we’re going to continue with the food comparison, this is some kind of tartare with truffle and puntarelle, and why not, made by some punk nun who lives alone on a hill with a recipe that hasn’t changed since the 1600s. It’s the bitter, metallic, earthy end of Italian music, made on the blade of a knife. It’s a good time for the Italian archive. Our palates, I think, are maturing.