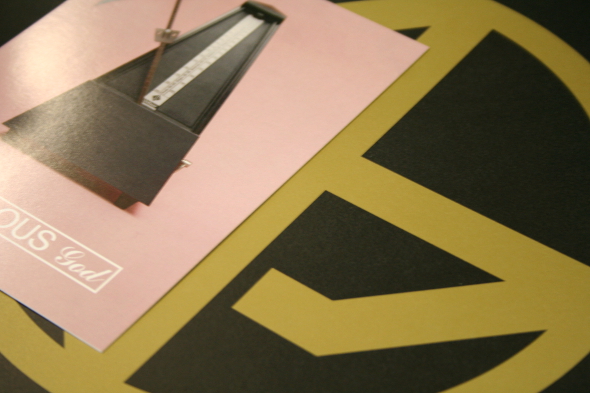 The sixth issue from the Jealous God label sees them take a musical leap into the left field. Previous releases on the label had been accompanied by mix CDs that facilitated the exploration of abstract sounds and ideas. Now that approach takes centre stage and occupies the vinyl release itself. Joining label owner Silent Servant is 51717, an alias for Lili Schulder, who has released on Opal Tapes and who the more observant reader may have noticed releases as part of Shadowlust on L.I.E.S. together with Svengalisghost.

The three tracks that Schulder contributes here all follow a similar trajectory. Layered synths float up like mist from a dew-soaked lawn and on “Porsche”, these sounds are cast over slow-motion beats. The other two tracks, “The Glove” and “Regard”, are beatless tracks, but the thing that all three compositions have in common is Schulder’s own vocals.

By turns, sweet and coquettish (“The Glove”) and mysterious (“Porsche”), the most memorable performance is on “Regard”, where against grey drones the vocalist lays her relationship with her partner bare, whispering: “I can feel what you are, how you are ; your soul… in me, in my dreams, when I am awake”. If that isn’t enough to endear the listener to Jealous God 6, then Silent Servant serves up two abstract tracks on the flip side. “Time in Body” starts with the efficient ticking and clanking of machines before menacing bass pulses and scratchy guitars lend the arrangement a flawed, human feeling.

Like Schulder, Mendez also concerns himself with the human voice; on “Severed Union”, this takes the form of indistinct phrases articulated over a dirgey synth and microphone feedback, like a garbled voicemail played back through television interference. The sixth Jealous God shows that its owners are willing to release anything that appeals to them – we need more labels to think like this.