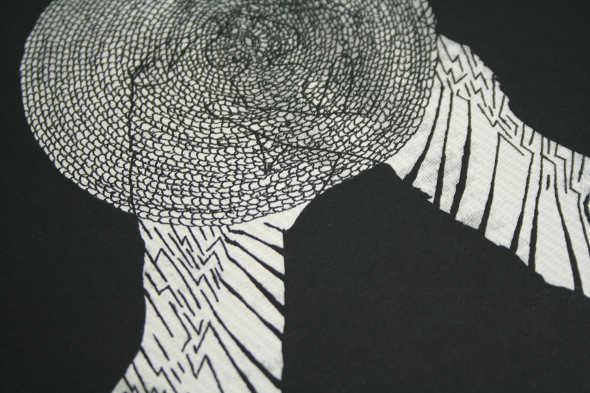 It’s no exaggeration to say that Gavin Russom is on a roll. The US producer released two of 2014’s finest records on Entropy Trax and now he follows them with this white-label number for Ron Morelli’s label. Loosely based on house and techno conventions, L.I.E.S 025.5, like the two Entropy Trax releases, shows that the US producer’s work has the kind of depth and attention to detail that is sadly lacking in most modern electronic music productions.

This three-tracker draws on familiar tropes, but in the same way that “Enthroned” saw Russom deliver a multi-dimensional take on dubbed out disco, each composition on L.I.E.S 025.5 delivers a number of new perspectives. “The Telstar File” achieves the near impossible and succeeds in revitalizing the 303. Russom’s pulsing acid line evolves in tandem with a greyscale synth and both elements are pushed along by distorted kicks and machine-gun fire percussion.

“Brood Queen” sees Russom turn his attention to the type of horror strings’ n’ synth combination one might expect to hear on a Giallo Disco release, but in a radically different context. Supported by steely, resonant drums and a stream of ink-black bass tones, it really lives up its title, reliving the panic of a stage actor caught off guard, struggling for that elusive phrase.

Best of all though is “Mantle of Stars”. Much like “The Beneficent, The Merciful” from last year’s second Entropy Trax record, this is a really unusual production from Russom. The same kind of rolling, robust drums that featured on “Brood Queen” act here as support for a cast that includes doom-laden guitars, a searing bass and a gnarly, distorted noise, like a hedge trimmer rubbing against a garden wall. These seemingly incompatible elements all hang together harmoniously and even retain a dance floor focus. The sense you get from this record for L.I.E.S., and Russom’s work generally, is that anything is possible and that’s something worth coming back for again and again.

A1. Mantle of the Stars
B1. Brood Queen
B2. The Telstar File