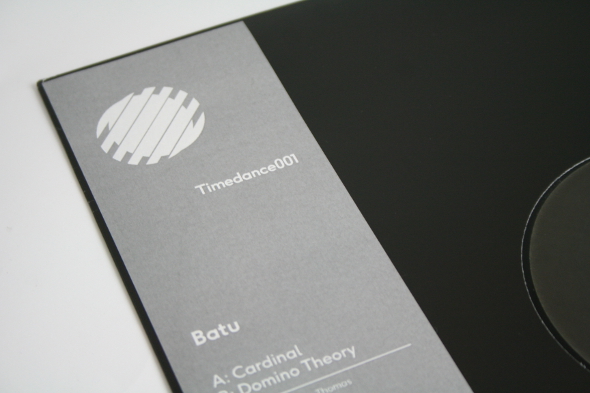 Omar McCutcheon has taken his time in unleashing his sound. He was off to a very strong start in 2013 with releases on Livity Sound’s sister label and Pinch’s Cold Recordings in a matter of months, prised straight out of a music degree with a snappy sound that complemented the emergence of murky hybrid dance music as is now readily associated with those imprints. Since then things have been relatively quiet, bar the occasional dub floating about in mixes from particular selectors, but now Batu is stepping up with his own imprint and a sound that takes threads of his previous appearances and bolsters them with some new ideas. 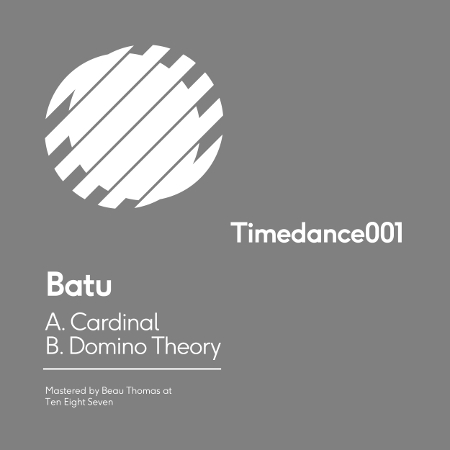 There are key facets to his sound that shine through on both tracks on this first Timedance release. Monolithic bottom end is a factor on the second track “Domino Theory”, while an overall gritty and somewhat industrial finish definitely ties this record to his former outings, but beyond that the similarities fade away and some startling new ideas come to the fore. On “Cardinal”, the energised rush of a synth line plays a leading role as it emerges from the dense enclave of strafing delay feedbacks and fluttering white noise. It’s a simple riff that mutates throughout the track, but it works marvelously, holding enough interest to exist in a track that doesn’t conform to the usual devices required in any kind of dance music.

This is certainly a track that can and should be played out, but much like Hodge’s “Flashback” it’s bereft of the usual kick and clap thrust that makes it easy in the mix and tells you where to move. Instead the energy is derived from that insistent synth hook and more subliminal rhythmic instructions, and in 2015 there can never be enough dance music prepared to take such risks and subvert the comfort of tradition. If a track can be as spine-tingling as this in its peaks and troughs, without ever delivering that big drop or killer beat, then it serves as a sterling reminder that the possibilities and emotional responses within electronic music are endless.

“Domino Theory” too moves in audacious ways, albeit with some more discernable footholds to lock on to. Another rambunctious synth leads the charge, this one more fluid and ranging than the last, but equally dominant in its presence. By the time the beat of the track starts to take on its full shape, it proves to be as alien as having no beat at all, with weird strangles of whines pinging off of what should by rights be a snare hit. It’s a refreshing diversion that nods to the formula while fucking with it in the process. In terms of such mischievous intention, look no further than the unexpected breakdown in which the synth gets waylaid by all kinds of nasty interference and aggressive processing with little concern for “flow” and “pace”. In being so outré, an exciting and refreshing kind of energy is injected into the track.

As stated at the start, this is still very much dance music. That Batu has proudly distanced himself from easier paths in his own exploration of the term proves he is an artist worth checking, and one hopes after a brief hiatus this is a sign of more activity to come from a vital and intriguing talent.