Dial Records go All in

Established in 2000, it’s fair to say Dial has become something of an institution for European house music. The Hamburg-based label has helped stabilise the careers of artists like Pantha Du Prince, Lawrence, Efdemin, Roman Flügel, and caps lock lover John Roberts. As Dial enter their 15th year of operation they’ve naturally decided to mark the occasion with a compilation featuring music from the aforementioned artists as well as productions from names also familiar to Dial like RNDM, Pawel, Christian Naujoks and of course label co-founder Carsten Jost. At 15 tracks large, the All compilation also invites “friends of Dial” Stefan Tcherepnin, James K, Physical Therapy and Dawn Mok to explore “the further reaches of the label’s diverse soundscape.”

One of the more interesting inclusions on All is White Material co-founder DJ Richard whose woozy “Zero” provides a teaser of sorts for the producer’s forthcoming album scheduled for release on Dial in September. Dial’s All compilation follows two remix packages of Efedemin’s Decay album from 2014, featuring a rare Traumprinz remix that Juno Plus editor Tony Poland has previously likened to Moby, and Roman Flügel’s Happiness Is Happening album and this year’s 2015 Sliced Africa 12″.

Dial will release the All compilation across both CD and digital formats as well as a three-part 12″ vinyl issue on May 25. 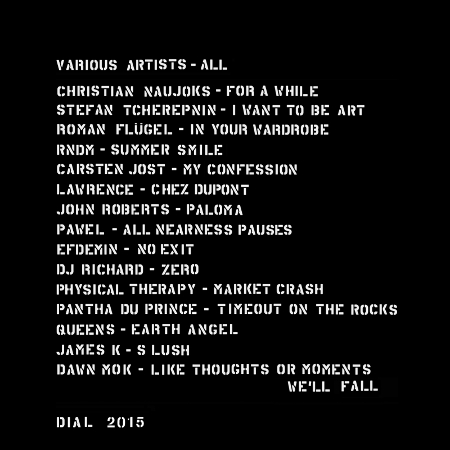