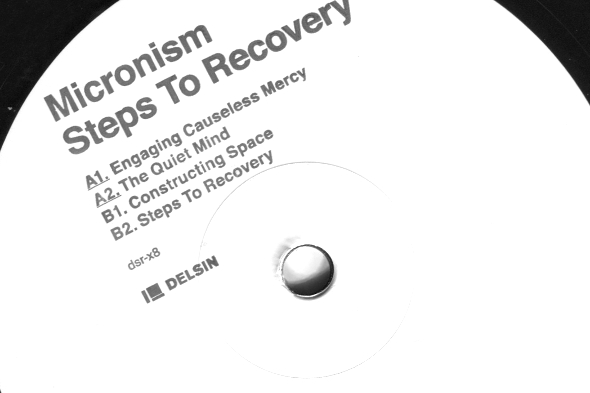 It’s always a thrill to find yourself turned on to sounds from a storied individual with a diverse past, as one choice track opens up another myriad of investigative paths down which to head on the never-ending quest to hear all the good music there is to be heard. So it is with Denver McCarthy’s Micronism project, which is enjoying a reissue spot on Delsin for the 1999 EP Steps To Recovery. As a native New Zealander now living in Brisbane, McCarthy’s core spell of releases around the turn of the millennium clearly garnered a cult following, even if they failed to truly break across hemispheres into the more fruitful US and European scenes. That said, there are always a few switched on individuals who pick up on these treasures at the time, and so it is a torch held can light a fire and suddenly a record that could have been abandoned to obscurity can be sprung into countless record bags the world over, in no small part thanks to the considerable clout afforded by appearing on Delsin. 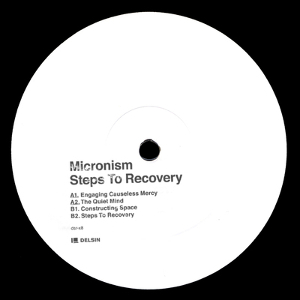 Of course the current trend of reissues and retro-fetishism helps in this way, as anything with a genuinely vintage sound (albeit late ’90s rather than late ’80s) is by and large embraced in favour of more recent imitations of antiquity. Sonics however are one thing, and musicality is something else altogether. What makes Steps To Recovery such a delightful discovery is the sheer pleasure to be derived from such heart-warming electronic music. Even if the beats do come from a drum machine and the synths are analogue, it’s not the first thing you notice about this record.

“Engaging Causeless Mercy” instead makes you sit up and pay attention thanks to its crafty and utterly teasing intro which sounds like it wants to head into malevolent territory until the pads come drifting in to smooth everything out. It’s a simple trick, but the harmonisation between the pad and the more mischievous high frequency synth sounds brings the kind of considered balance that makes for a purely enjoyable listening experience. The fact that the rhythm section is populated with swishing cracks of a mechanical whip in favour of a typical snare-clap solution only adds to the satisfaction.

There’s a more gentle house lilt to “The Quiet Mind”, with all its jovial delay pulses giving the lead chords a life of their own around an easy-bumping beat. It’s a track steeped in familiarity, and there are certainly plenty of deep house tracks you could point to with similar ingredients, but in the subtleties of production, from filtering to effects, there is just that extra thought and care that separates one special track from another disposable one.

“Constructing Space” takes a little longer to fully reveal itself, spending half the run time reveling in subterranean techno hypnotism with a hushed sprinkling of tribal magic worked into the methodical motion of the drums. It would be easy for the track to have remained in this mentality for the full eight minutes, but then around the midway point the real kick drum emerges and an orchestral murmur starts to call through the mists. As you might expect by now, it grows gracefully into a soul-cleansing meltdown of the deepest techno.

By way of contrast the title track comes on a little more straight-forward, plying a trade in dubby deep house with an upbeat kink despite the melancholic keys. Again the touches are there to give the sounds an extra bite, and fundamentally it’s a good track, but it pales a little in imagination compared to its ineffably refined companions on the same slab of wax.

It’s intriguing to note that one of the key feelings emanating from the record is one of spirituality. McCarthy has, for the past ten years, been a full time practitioner of Bkakti Yoga, and has produced music under the DJ Vraj alias that, according to his Discogs biography, “focuses on “kirtan” (devotional music) and mantra mixed with electronica.” On the basis of this EP, it’s clearly a trait that he always had in him, whether defined by a religious lifestyle choice or not, and now all that remains is to take the time to dig back further through his releases and aliases, and see what other gems are there waiting to be unearthed.

A1. Engaging Causeless Mercy
A2. The Quiet Mind
B1. Constructing Space
B2. Steps To Recovery