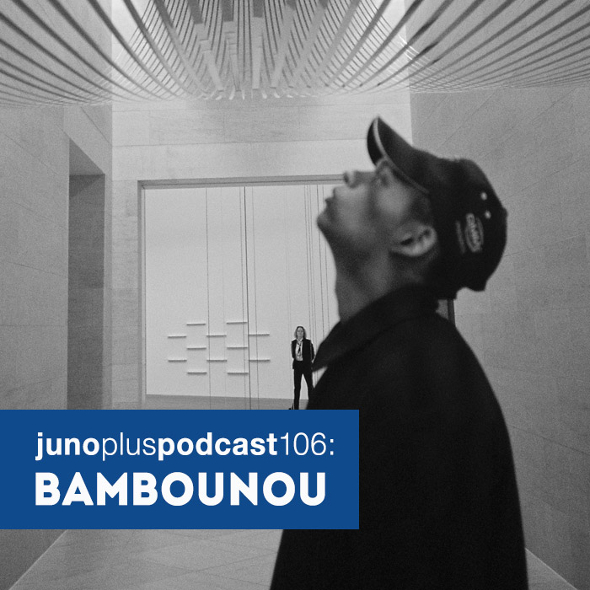 The Paris artist toasts his new album for 50Weapons with a heady 90-minute mix filled with unreleased material wedged in between cuts from DJ Qu, Regis, Vril and more.

Under the delightful name Bamboubnou, Parisian Jéremy Guindo-Zegiestowski has built up a sturdy discography with early bass-inflected techno releases on local labels YounGunZ Entertainment and ClekClekBoom, alerting Modeselektor pair Gernot Bronsert and Sebastian Szary to his obvious talent. It’s their 50Weapons label that Guindo-Zegiestowski has used as a platform to cultivate his style of productions across a myriad of 12″ releases and an intergalactic-themed debut album Orbiting in 2012 that Juno Plus reviewer Brendan Arnott described as filled with “moments of giddy creativity”.

Having continued to supply 50 Weapons with 12″ material in the ensuing period, it came as little surprise late last year to hear a new Bambounou album for the label was in the works in the shape of Centrum. Due for release later this month, the ten-track album expands on the futuristic themes explored on Guindo-Zegiestowski’s debut long player but moves the scene to Earth circa 3984 with both Dune and Akira offered as telling cinematic reference points.

Having recently collared Low Jack for our podcast series, we felt it would give a greater picture of the prevailing sonic trends in Paris if we invited Bambounou to contribute. The resultant 90-minute mix offers a flavour of what you might expect from Bambounou in the club, and features a healthy dose of his own unreleased productions. Guindo-Zegiestowski was also kind enough to reveal the origin of the name Bambounou, his experiences of playing Panorama Bar, working with Modeselektor and more on the below Q&A.

Hi Jérémy how are things for you?

I’m doing quite alright thank you, been having some trouble sleeping and I’ve had the weirdest dream of all time, but besides that I’m doing good.

Could we firstly ask where the name Bambounou derives from? It’s most definitely one of our favourite producer names to pronounce!

Hahaha, it’s a nickname someone gave me back in the days, it doesn’t really mean anything but English-speakers sure do like to pronounce it.

Thanks a lot for doing this mix! Would you say it’s indicative of a current Bambounou club set?

In a way yes, but during mixes like that I like to add tracks that I wouldn’t play in clubs. So some of theses tracks might be played live…

There’s a healthy portion of unreleased material in there too, judging by the question mark-laden tracklisting – is this all your own music?

Yes it is and they never are to be released since my laptop got stolen with the stems and the premasters, and anyway they don’t deserve a release so I’m just playing them in clubs and in podcasts.

You are on the cusp of releasing your second album Centrum which appears to have something of an intergalactic theme to it – could you expand on this concept for our readers?

My first album Orbiting was more about spatial expansions and unknown planets, colonisation. Centrum brings it back on earth but in a near future. It’s a story depicting how I imagine our work would be in 3984.

How would you say it differs from your first album?

In two years I’ve had time to buy analogue gear so I’m now using a Tempest, a Virus C and and old tape recorder I found in my grandmother’s attic so for me the sounds on this album are better.

We see you are playing Panorama Bar with Laurent Garnier and SCAN X later this month, how have your experiences been DJing there?

I’m so happy to be playing among two amazing producers and DJs. This club is my favourite and every experience I’ve had as a DJ have always been good. I’m always having the best time when I DJ, no matter what.

It’s the onset of a Centrum album tour as well right? Where else will this tour be taking you?

I have cool gigs coming up which are all listed below.

You naturally have built up quite a strong relationship with 50Weapons; what is it like working with Gernot and Sebastien?

Both of them are workaholics and they are the nicest people. They have a strong experience of the scene and everything in it, I’m always listening to what they have to say, they are my daddies.

You are currently involved in Rinse France, how do you feel the station is progressing?

It’s good to have a radio station in France that provides different music from what we usually have on the FM and I hope one day Rinse France will reach the airwaves so people can discover our music and what we stand for.

And what do you feel about the current state of underground music in Paris? From the outside it looks quite healthy!

Seriously, right now in Paris it’s amazing, they are so many labels, and for everyone; like Dement3d, Bromance, My love Is Underground, In Paradisum, ClekClekBoom, Latency and so many others.
Same for the clubs, every weekend the line ups are so on point. I think we probably have one of the best scenes at the moment.

So many projects but I keep them secret until they’re all 100 per cent finished . Thanks for having me on board guys. Hope to see you soon xx Jérémy