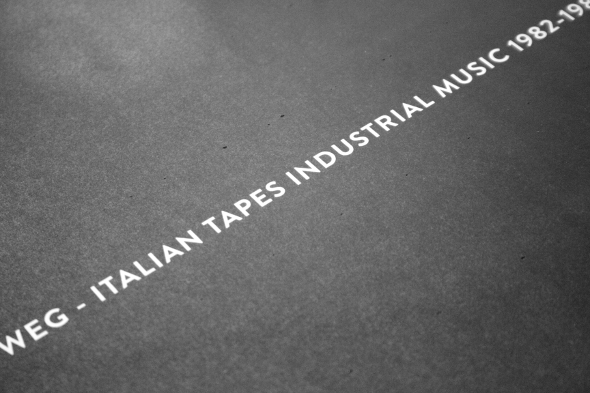 Oh Turin, Turin, city of anarchists and aristocrats, city of industrialists and industrial action, snow-covered grey city with the FIAT factory coughing in the background, city of neo-classicist rigour and angry squats. Oh Turin! City of toxic fumes, punk fumigations and cosmic fumaroles. Turin which gifted us unforgettable feelings through a whole range of shadows in the mid to late ‘80s takes centre-stage in Mannequin’s archival reissue of some forgotten works from the Der Zeltweg label run by one of the label’s stars of the last two years, Musumeci.

“For a brief moment”, Mannequin proudly proclaim, “Turin was Italy’s Sheffield”. The truth is that Turin’s industrial heritage doesn’t, in fact, need that sort of term of comparison. From the early lyrical nightmares of projects like DsorDNE and Agonije, to the subcultural assemblative efforts of the likes of Marco and Maurizio Pustianaz, to more recent rediscoveries, such as Direct Cut’s reissue to the (self)productions of infernally dark Turinese loner Bossa Luce, Turin has its own style. Something we might even want to call the city’s sound – brutal and lyrical at the same time, romantic melodies pushing their way amidst endlessly complex, endlessly sinister forests of sounds spiralling, twisting, screaming.

What we have here is the partial output of three projects which gravitated around Musumeci and examples of the band’s side-projects: Errata-S-Corrige, Gasdehyde and Herpes-z. We get three or four tracks from each, just enough to whet the appetite (in the hope to be blessed with more of this stuff in the future!), and just enough to attest to a visionary scene for which ‘industrial’ is a strange and many-headed beast, more a worldview than a sonic palette.

The Errata-S-Corrige tracks are a good introduction to the psychic and mechanic landscape here. The tapes obviously haven’t been cleaned up too much, submerged as they are in a lovely background buzz, upon which a phaser appears to chase a vocal played backwards, the whole thing soaked in a damp, watery, totally futuristic squelchiness. The whirring opening track “Bilbao” is so sideways, backwards and panicked it feels like a car-chase in a psychiatric ward. The sequencer always takes centre-stage (as it does and should), but it’s used in an almost drum-n-bassy way which makes you think more of early Warp records than of anything from the time.

The central Gasdehyde section shows the project’s more sophisticated and probably most traditionally darkwave heart; as the four tracks progress a certain mechanical virtuosity and sonic aggression finds a more considered, minimal counterpart in classic chord progressions over slower, more sensually arranged sonic landscapes. The pièce de resistance here is “Ratio Legis”, which has the stuff of an idiosyncratic dancefloor classic, firmly married to a goth cause but with a violent sweep which makes it totally unforgettable. “V. Woolf” (great title!) plays similar games: more neutral in sensibility yet equally deserving of some 5 A.M. mass attention.

Amongst the various jewels here Gasdehyde also ‘cover’ Throbbing Gristle’s “Subhuman” – while the very fact of the cover lays out territory and affiliations with the happy valleys of dejected noise in the UK, Throbbing Gristle’s 1980 angry chant, so masculine and mad in its original version, turns into something totally dance-oriented, super-filtered and robotic in an interesting, slickly executed and also very telling move.

Three thoroughly enigmatic Herpes-z pieces close the show, opening with the quasi-funky and utterly weird “99”, moving into much more horrifying but dare I say also avant-garde territory with the epic “Limbo”, and concluding with “Panico” which is a tense, frozen, icy thing. The record is great, occasionally haunting, consistently prismatic but above all wildly, spectacularly ahead of its time. Long live Der Zeltweg, able to bring us pleasures from the past which tell us something about the present and long live Italian industrial, long live Turin!