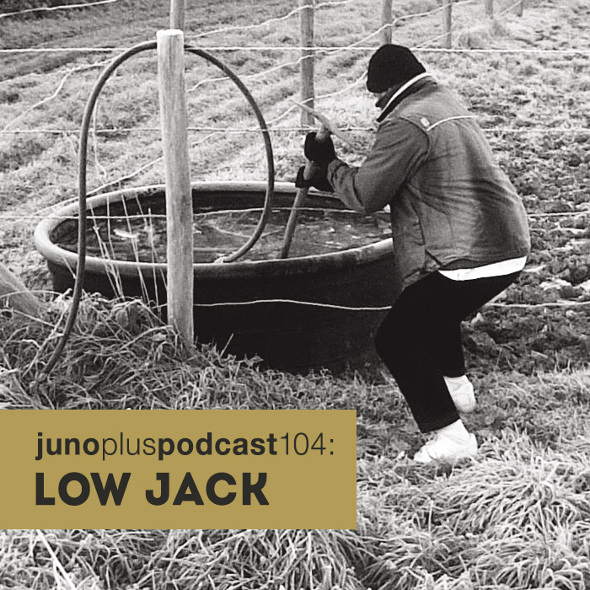 The Parisian artist digs deep on an enlightening one-hour selection.

From his homebase in the 11th arrondissement of Paris, Philippe Hallais has become one of our favourite French artists thanks to some fine music under the Low Jack name for the likes of L.I.E.S., In Paradisum, Delsin, and The Trilogy Tapes over the past few years. Never afraid to trust his instincts, Low Jack material has hit the sweet spot between willful experimentation and music that serves the more open-minded dancefloors, perhaps best encapsulated by the Garifuna Variations album issued by L.I.E.S. last year. Here Hallais presented a recorded document of the live performance he had previously been invited to undertake by Les Siestes Electroniques, which revolved around reworking samples of the Garifuna people of Honduras taken from the vast sound library of Paris museum Quai Branly.

This sense of sonic adventure has been evident in Low Jack’s recent Imaginary Boogie 12″ for The Trilogy Tapes, and appears to be a defining characteristic of the Editions Gravats label set up last year with the artist’s close friend Jean Carval. Editions Gravats has to date issued a 7″ from Hallais as Gravats and a wonderful document of ’80s French pop music in the shape of the Quartier Choc tape from Antinote boss Quentin ‘Zaltan’ Vandewalle.

In addition to his productions, we have also been consistently impressed by the various mixes from Low Jack. Each of which have proved equally daring in terms of selection and execution, making the idea of requesting a mix for our own podcast series one of the easiest decisions we’ve made. The resulting hour-long mix is filled with unknown gems, providing a perfect introduction to Low Jack’s excellent taste and mixing style for anyone not yet familiar. Hallais was kind enough to chat cheese (literally) as well discuss plans for the Editions Gravats label, his shared love of ’90s RnB acts with Will Bankhead, and that forthcoming album for In Paradisum.

Hi Philippe, thanks for doing this mix, is there a specific theme to it?

That mix was put together like a Mixtape or a radio show. I kind of always liked interludes, skits, mixing records in a fade in/fade out style. Like beat-matching everything doesn’t have to be essential… I grew up with cassettes and rap music mixtapes as opposed to techno DJs mixes where it’s all about 100% re-creating a party/club set on a CD. Of course there are exceptions, like Never Scared by Hollertronix, that was dope at the time it came out.

How and where was it put together?

I recorded it at my crib, in the 11th in a very simple way (two decks, a mixer and some slight editing on a computer). Most of those records were bought in record stores in Paris or to Iueke who is a crazy record dealer. I like to meet him at his place once a month: we’re kicking a bottle of wine while he’s playing me the heat. Let’s just say it like that. Gwen is the fucking man!

You currently have a regular show on Rinse France, how would you say the station is doing? There seems to be a healthy amount of music featured?

Certainly not an easy challenge to start a web station with only DJs based in France… Here we definitely don’t have that pirate radio culture that you guys have in the UK! Rinse France is just at the birth stage, the station is online since like a year or so. Manaré & Laurent are very passionate about it and they are really helping the Parisian scene. It is a good spot to hang out with friends: there’s always around some people you know. Like recently with D.K. we ruined Tomas More’s last show on air by saying some bullshit on the mic.

We’ve naturally been fans of Editions Gravats, the label you set up with Jean Carval. How exactly do you share responsibilities for the label?

Me and Jean have know each other for many years now. He’s the person I always send music and asking advice on shit. You know, Jean is not in “the scene”, he’s not some fool from that music business; he’s just doing his thing in a random town in Brittany. He’s kind of always telling me that my stuff sucks, he’s the most honest person I know. No doubt. Basically on Editions Gravats I am the paper work guy, the one who’s cleaning the toilet seats. Jean is the damn A&R: most of decisions and directions are made by him.

What was your immediate response listening to that mixtape that Quentin Antinote did for the second release?

We were really into his first French Boogie tape Quartier Chic pressed on like 20 copies. I felt quiet frustrated that not so many people, outside of his small crew in Paris, knew about his sick French funk collection. So I asked him gently (probably quiet smashed after a few bottles of wine) to record for us a mixtape. Result is so good… He’s already working on the new one actually. Pretty damn stoked for it!!

It seems you have some interesting projects coming up on the label too, can you tell us about some of the artists you will be introducing?

GRAVATS003 is about to come out next month. It comes from High Wolf under his Black Zone Myth Chant alias. Same story, we loved the cassette he released himself in 2011 (Laitbac did a re-issue recently on wax, you gotta check this out) and we asked him to send us stuff. In the end we are releasing a full new LP that I like to describe as something between Art Of Noise, La Chat and Don’t DJ.

There is A LOT of upcoming material from other dudes who are waiting to be released. We might even start our own strongly matured Gravats cheese. It’s gotta be very smelly.

In terms of Low Jack material, last year’s Garifuna Variations album for L.I.E.S. was a most pleasant surprise and a truly compelling listen. How did the initial performance that inspired that album go?

The OG performance is pretty close from what the album sounds like. Except tracks were way too long. The “trance mode” was a bit too much… Most of the studio work to adapt the Quai Branly Live on a record was to chop everything.

How long did you spend preparing for that performance in the museum’s sound archives?

Two to three weeks. I quickly started my research only on Honduras (as I’m from there, this made sense) so that was quite easy to be focused and not being lost in those huge archives. There’s not that much of samples that I used though. I had access to a lot of books, not only audio archives. Most of the inspiration sources I’ve been using were stories, pictures and Garifuna songs lyrics.

More recently you put together a two-hour cassette mix and a 12” for The Trilogy Tapes. How did you come to release with Will Bankhead?

Bankhead contacted me after the Flashes 12” came out. Then we met in Paris with Ron and we got drunk and shit. Will is the man. Dude is a SWV fan as I am. Instant love. There will be more TTT stuff from me to come out this year. Label is so sick!!

We hear you have a new album coming through In Paradisum later this year, what should people expect from that?

Yup, some very dumb techno. I don’t really know what to say about it. When some dude sneezes very hard at your face on a packed metro, that’s basically what this LP is all about.

What else do you have planned musically for 2015?

As well as the In Paradisum LP, there are new releases on L.I.E.S. and TTT. A few collaborations with close friends in the making too.

Finally, the shot you supplied us with seems to be you on a farm preparing some cheese. We hear this is an enthusiasm you share with local neighbours, Quentin from Antinote and Ron from L.I.E.S., what cheese is currently getting you excited?

Buying/eating cheese is my first hobby. It is a massive frustration to not be living my true dream to become a badass cheesemonger. The stinkier the cheese is, the more I like it. Recently I met a guy in my neighbourhood who’s selling a crazy Brie de Melun. Very classic, BUT homeboy is customizing it by garnishing the inside with mascarpone, herbs & truffles. Shit is wild!