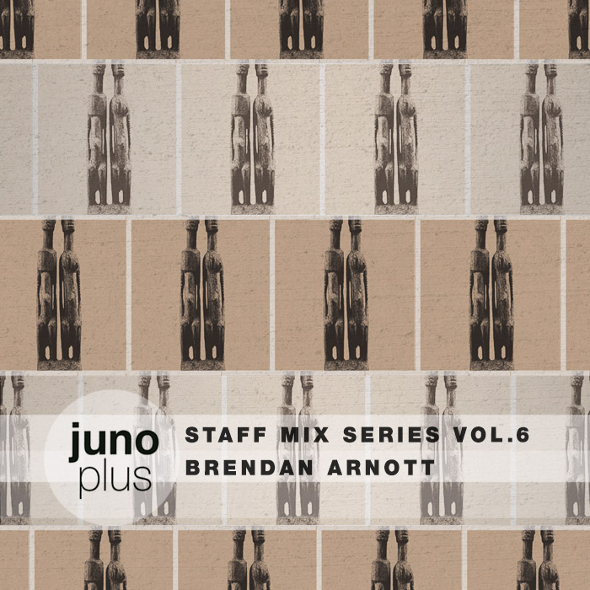 The staff mix series heads to the East Coast of Canada with an hour-long selection from Toronto writer Brendan Arnott, taking in everything from Dozzy to Objekt via Craig Leon and Sade.

Recorded in one take on a sunny winter afternoon, my contribution to the Juno Plus staff mix series doesn’t abide by a strictly curated theme or genre. Instead, I wanted to make something that had a few landmarks of stuff I love to hear in mixes: A cute intro, vocals that impart a sense of longing, infectiously repetitious techno percussion, moods that oscillate between unsettling and uplifting, a sense of ethereal dreaminess, weightlessness, mechanical rigour – but also, its antithesis, tracks that rub some kind of raw nerve from your teen years that you’d forgotten about.

This mix was my attempt to cram many of those things into an hour. The joys of being off-key or off-time, my partner’s heartbeat from an art collaboration on Teshima Island, Grace Zabriskie’s chilling monologue from Inland Empire, the blissed-out Skype ringtone funk of Donato Dozzy & Tin Man, a lovesick dancehall instrumental, the acidic burps of Omar S, Sade’s eternal vocal kindness, Nike Bordom’s drawling organ sounds, Norman Nodge’s maths teacher-esque techno. The feeling of careening through the stratosphere in a malfunctioning spacesuit knowing that death is imminent but that your view is pretty decent, as captured by Objekt on “The Stitch Up”. Paula Temple’s droney gender-play, Hanna’s flute-filled dream house, the smiling narrator of Kassem Mosse’s “B3” who exclaims “living on the edge!” just before the track cuts out. Hope it’s a fun time.