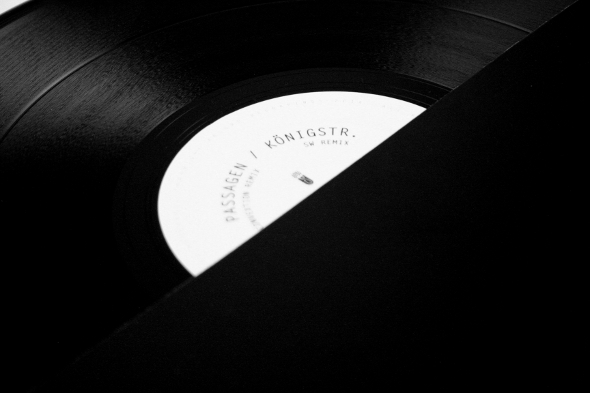 A year on from their debut album, Achterbahn D’Amour are seeing their work being handed over to a strong cast of characters who bring four distinct approaches to bear on the original material. While the original release on Acid Test was devoted to acidic jams of varying intensity, on this jam-packed 12” all manner of leftfield house and techno concerns are embraced as a means of looking beyond the dominant 303 throb and lifting the hood on the other moods and textures the trio embedded into their crowning work. 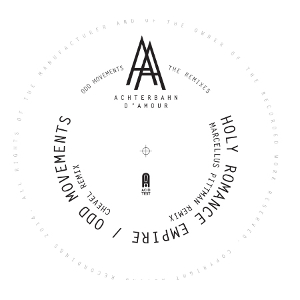 Detroit champ Marcellus Pittman is the first up in the remixer hot seat, taking “Holy Romance Empire” to task, and he actually keeps the stripped down spirit of the original intact and instead sows a select amount of oddball alterations in amongst the existing framework. It’s a subtle confection, underpinned by an intermittent low-end thrum and topped off with a delicate sizzle of hi-hat. When the original 303 does come in, it’s doubled up and nudged out of tune to create a delightfully off-kilter lead synth that makes sense only through dogged repetition. Pittman’s is a simple approach, which is of course in keeping with the style of his Detroit bretheren, but it still makes full use of the nine minute run time to move about between the few key phases of the track without feeling stagnant.

“Odd Movements” in its original guise was one of the stranger offerings on the album, moving the 303 in and out of earshot with little else but reverb decay for company. Chevel, fresh from outings on Stroboscopic Artefacts and Mistry amongst others, buys into this left-of-centre approach and offers up the kind of club track to make less risky DJs squirm uncomfortably. There is little of the original to latch on to here, but rather a set of rasping drums tilted into a spartan groove that comes and goes with the erratic nature that embodied the acid line of the original. It feels somewhat disjointed, teasing the possibility of a sustained beat only to pull back impulsively, which makes it tricky to consider where the track should sit in your collection. Whatever the case, sonically it demands attention thanks to the nasty hiss of the beat.

It feels as though Convextion was a first and only choice to remix “Passagen”, a track which channeled Detroit electro in its snaking drum pattern while worming haunting pads in amongst the drum machine pulses. Convextion of course know a thing or two about creating immensely atmospheric electro, and it’s no different on this remix, which melts your heart with the first chord change of its own elegant and distant pad. The scuzzy dirt of the original drum sounds has been replaced by pristine hits that fall in a precise funk, leaving ample space for dubbed out percussion and more arresting swathes of spooky synths. Convextion have a style that is unmistakably theirs, and it fits perfectly with Achterbahn’s original template, working like a cover version that was always meant to be.

You can always count on the Sued posse to bring something unpredictable to the table, and so it is with SW’s remix of “Köningstr”, which comes to life in a lively tribal broth of exotic hits and space age synth lines. The forthright nature of the original has been replaced by a psychedelic intention which comes strapped with a neatly broken techno drum arrangement, falling delicately so as to allow space for a dizzying spread of sounds to swell up and transport you elsewhere. Being madcap and focused is a rare balance to achieve, but while it may be deviant in its ways, SW’s approach never strays off course.

Hats off then to all those involved in arranging this selection of remixes, as they bring some truly intriguing perspectives to the original tracks. Each one is a strong statement of character, and while they interact with the source material in different ways, the proof is right there that an infinite world of possibilities lie in any sound depending on how you want to approach it.