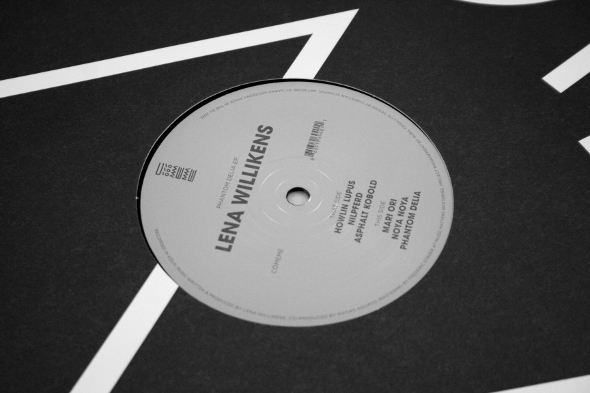 Lena Willikens may only just becoming recognised this side of the English Channel, but in her native Germany she’s considered to be something of a rising star. She’s been plying her trade as a DJ for some time, most famously as Friday night resident at Düsseldorf’s acclaimed Salon Des Amateurs. At this venue, Willikens showcases a dark, woozy and occasionally paranoid style that takes in off-kilter techno, skewed new wave, pulsating EBM, industrial disco, experimental electronics and jacking, otherworldly house. Her long running Sentimental Flashback show for Cómeme Radio is more conceptually driven, but just as diverse, and it’s clear the Cologne label considers her to be a star in the making.

While her production efforts to date have been sporadic, to say the least – so far, she’s released just two tracks; an odd chunk of ghost wave for Slowboy Records’ Kingii compilation back in 2012, and a collaborative cut under the Titanoboa alias in 2013 – Cómeme boss Matias Aguayo clearly views Willikens as an untapped talent. Last year, he offered to help her record a debut EP, confident that the results would be magical – dark, maudlin and offbeat, perhaps, but more than worthy of release on Cómeme.

Phantom Delia – a reference to her musical heroine, legendary Radiophonic Workshop composter Delia Derbyshire – is an assured and, for the most, inspired debut. Variously dark, trippy, otherworldly and intense, it portrays Willikens – with a little assistance from co-producer Aguayo – as a clandestine new-wave starlet. Willikens is evidently as happy making dystopian post-techno and sparse leftfield pop, as she is claustrophobic ambience (check the brilliant “Nilpferd”) and the Radiophonic Workshop style experimentation of the hazy title track, tucked away at the end of side B.

All six tracks come cloaked in the distinctive pulse of analogue electronics, with hypnotic, vintage-sounding synthesizer lines and foreboding chords clustered around a variety of curious drum machine rhythms typical of Cómeme. At times, these are sparse but jaunty (see the throbbing bass and fluttering, late night electronics of “Asphalt Kobold”, or the hissing simplicity of “Mari Ori”); at other moments, they’re clanking, industrial-influenced and paranoid (check the Acid Arab-do-Ghostwave synthesized handclap explosion that is “Noya Noya”).

Throughout, Willikens chooses choice moments to add atmospheric, stylish spoken word vocals in her native German. I have no idea what she’s on about (sadly, my German is perfunctory at best), but Cómeme’s high-minded press release talks about “technorotique lunatic lingo”; you can bet your bottom dollar that it’s a little weird. In truth, this only adds to the mystique surrounding Phantom Delia. While there are standout tracks – see the pulsating, Etienne Jaumet-ish intensity of opener “Howlin Lupus”, a near perfect fusion of jackin’ dancefloor rhythms, percussive intent and horror-influenced new wave electronics – it should be considered as a single musical statement.