The first release of 2015 from the Paris label will come from the unheralded Japanese artist.

The successful emergence of Quentin Vandewalle’s Antinote has so far been founded on working exclusively with an array of local Parisian artists such as Iueke, Geena, and D.K., as well as similarly minded musicians dotted around France. After their most impressive year to date, rounded off by some dizzying long form techno from Bordeaux’s Panoptique, the first release of 2015 from Antinote finds the label breaking with tradition and looking much farther afield with a debut for Japanese artist Inoue Shirabe.

The Okayama-based artist is a new name to us but appears to be a close ally of Antinote, and is set to join the cause next month with a two-track 12″ entitled You Don’t Know My Lightcycle. The forthcoming record looks to place Shirabe at an interesting intersection in the Antinoteverse, with the title track a slice of late “night haunting techno” recorded straight to tape aligning him with Geena, whilst “YSYEYXY” is a dream-inducing kraut adventure akin to Nico Motte’s sublime Rhealogia 12″.

Antinote will release You Don’t Know My Lightcycle by Inoue Shirabe on January 19. 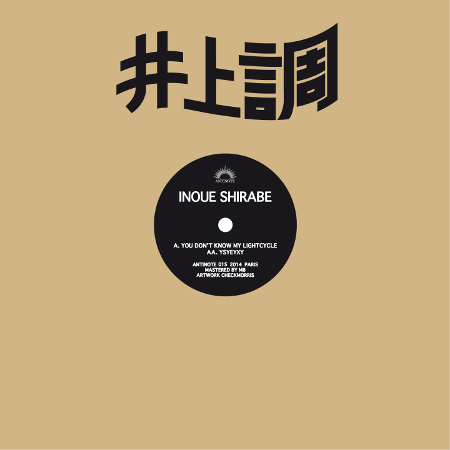 A1. You Don’t Know My Lightcycle
B1. YSYEYXY