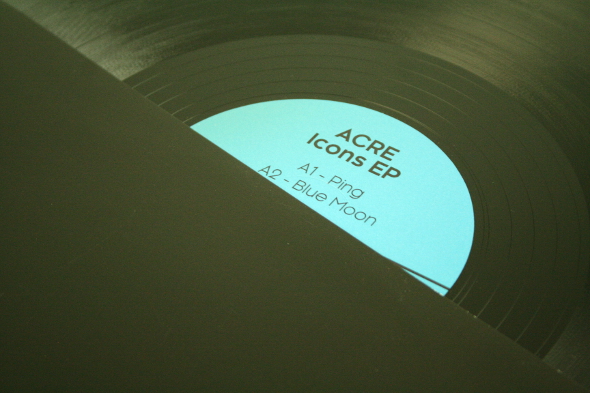 In a blitzkrieg of clattering drum breaks and mutant sirens, Acre’s latest release batters its way into earshot on the back of tempestuous manifestation “Ping”, and it demands attention in an instant. What is so refreshing about the approach here is that it doesn’t lean on the same tired hardcore breaks that have been utterly rinsed over the last year or two, instead reaching to other unknown sources for rough live beats and wielding them with the same kind of punk antagonism that embodied Untold’s Black Light Spiral album. After the moody textures and growls of his appearances on Cold, Acre’s efforts on this release for Pinch’s bigger label seem like the next logical step up to a distinctive and exciting sonic identity.

“Ping” is a daring and challenging track that will appeal to a niche core of dancer. Electronic purists may indeed struggle to feel enamoured by the rasp of the snare and shimmer of the hats, and the bleeps and hoover blasts that accompany those drums too are more indebted to confrontational emissions from the industrial underground than they are streamlined dance music. “Blue Moon” is no less of a challenging prospect, albeit in a different way. There’s still a roughneck flavour to the percussive hits and gaseous blasts, but everything plays out with an aqueous charm that is disorientating in its pulsating swell. It’s a playful track that smacks of time spent tweaking effects boxes in search of the lurid and bizarre, but it’s anchored to a focused and somewhat cloying atmosphere.

From here the EP seems done with notions of accessibility altogether, as “Icon” fires off a wonky amalgamation of drums and tones fed through conflicting delay times so as to create a garbled funk of no fixed groove. It’s only through dogged looping that anything can be discerned of the rhythm, until a mean kick comes marching in to attempt to bring order to the chaos. It half succeeds as well, but when the kick drum is equally staggered and another snare comes lurching in half-cut, there’s little hope of anyone making sense of where the beat is. The best part is that it doesn’t matter, for in the loose-fit melee Acre finds his way and it truly works as a production approach.

“Reload” certainly comes on in friendlier tones, marking the first slither of outright melodic warmth on the whole EP, as a woozy chord slides in and out between shattering shards and occasional burps of distorted bass. It’s a spacious enough piece to be able to pick out the finer details in Acre’s production, and it really is astounding. The layering of such straining, ranging sounds creates a push-and-pull pressure that requires a maddening focus, even just to listen to attentively.

Icons is certainly an audacious EP, and it won’t be to everyone’s taste, but it’s hard to argue with the bloody-minded inventiveness of Acre in how he has approached all four of these tracks, creating something thrilling and rather nasty along the way.