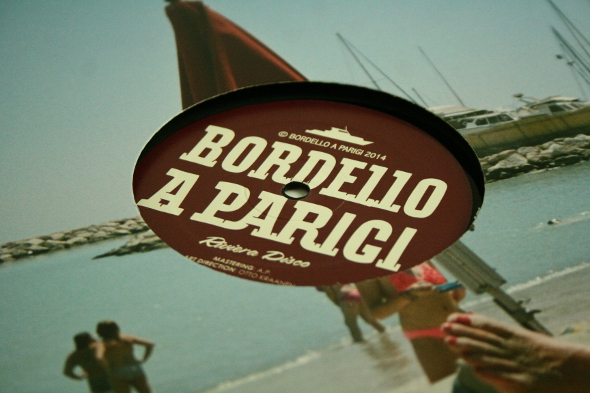 The Bordello juggernaut keeps on rolling and while most of us have put away our swim shorts and shades for another year, Riviera Disco Volume 3 shows that the label is happy to keep reliving those happy summer memories. This installment doesn’t have the kind of fist-pumping anthems that Bordello has been dropping with alarming regularity this year, but it does show that the label is adept at capturing many different moods.

At the freakier end of the spectrum is Le Chocolat Noir’s “Disco Noir”. A woman shrieks continuously and an unidentified man intones the track’s title against the backdrop of dark EBM pulses, tough snares and gloomy synth lines. It’s hardly the stuff that steamy summer nights are made of, but for that kind of vibe, Volume 3 has Dany E’s “Deseo”. Dramatic synths sweep in over funky drums and a searing guitar line morphs into epic power chords. A love of radio-friendly guitars are clearly not Dany’s only passion and he pushes “Deseo” into a pulsing, arpeggiated groove, like the kind of track that might have played out in one of the cooler ’80s brat pack movies. Tony Cops’ “Space Cabin” is much more straightforward but just as catchy as epic synth riffs and a tranced out melody – that’s trance with a small ’t’ – unfold over Miami Vice drums and a pulsating Legowelt-esque groove.

But try as they might, none of these contributions can match German duo Stefano E Bene’s “All For You”, which is as infectious as a dose of summer resort crabs. Featuring the evergreen Fred Ventura on vocals, the pulsing bass and combination of tight drums and claps sounds strangely like New Order on Low Life. These elements provide the basis for the Italian legend to drop droll lyrical vignettes like ‘’you’re my girl, you’re my love, I will stay forever by your side” and the addition of a soft metal guitar solo midway through cannot fail to conjure up memories of sunburn, lost baggage and cocktails by the beach at sunset.