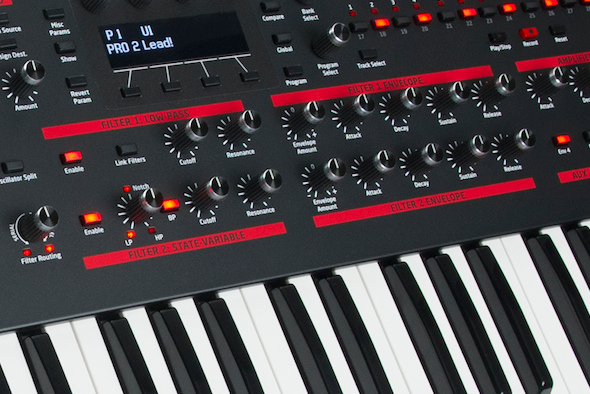 Rob Lee checks out the new Pro 2 synth from Dave Smith Instruments and finds out if it really is “the ultimate mono synth”.

You would be forgiven for thinking that Dave Smith was exclusively about polyphonic synthesizers. After all, his first foray into the business of synths was the first affordable and practical synth with the ability to play more than one note at the same time. I’m referring to the world famous Sequential Circuits Prophet 5 that hit the shops back in 1978 and still makes analogue synth fans misty eyed, even today.

The Pro 2, on the other hand, is billed as a monophonic synth, meaning that it plays one note at a time. The monophonic description places it alongside similar Dave Smith synths like the Mopho, which is still hugely popular, and the Evolver, which is a desktop synth with no keyboard. Recently, it feels like the focus at Dave Smiths Instruments has been on high profile polyphonic synths, with the Prophet 12 creating a major buzz when it was released last year.

Now that the Prophet 12 honeymoon is most definitely over, the vacuum has to be filled with something, and the Pro 2 certainly feels like a synth worthy of the same level of attention. In terms of design, the Pro 2 has a lot in common with the Prophet 12. It shares the same smart red graphics on graphite with the same high quality knobs, buttons, wooden panels and keyboard (this time with a smaller 49 note range), together with velocity and after touch sensitivity. At first glance it has the appearance of a cut-down version of its larger polyphonic sibling, but it has a number of hidden layers.

Like the Prophet 12, the Pro 2 has four high quality digital oscillators with the same wavetable synthesis, including some new “superwaves” that can only be found on this machine. It also includes the sound-shaping tools found on the Prophet 12, as well as pre and post filter drives. The two filters can be operated in series or in parallel; the first is a classic four-pole low pass filter reminiscent of the filter on the original Prophet 5, and the second is a continuously variable filter that includes low, notch, high and band pass modes. Both filters have their own dedicated ADSR envelopes, but getting them to work well together does takes quite a lot of experimentation. 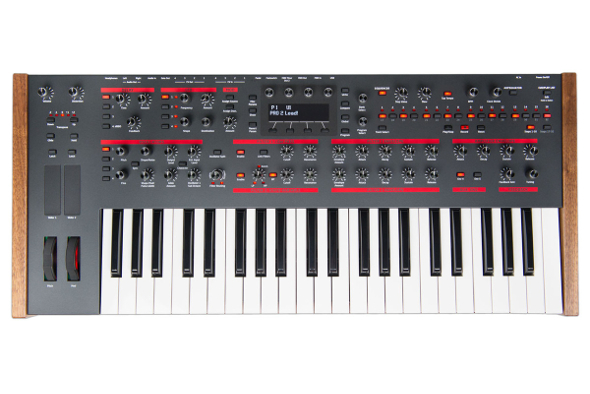 To add to the confusion, it’s not a simple monophonic synth – it’s possible to get up to four voices simultaneously using the Pro 2’s paraphonic mode. This dynamic mode allows the four oscillators to be triggered independently with their own individual envelopes whilst retaining the dual filters. It would perhaps be better described as a monophonic synth with polyphonic capabilities rather than the slightly perplexing term paraphonic that Dave Smith Instruments have run with.

Navigation of the Pro 2 is aided by the very small digital display, but what it lacks in size makes up with clear and bright feedback. At times it did feel as though I was diving into both the menu and the manual quite a lot, which took some of the joy out of playing it, though once I had gotten to grips with the modular-style onboard sequencer – which is both versatile and powerful with 16 channels of 16 steps or 8 channels of 32 steps – I did start to have a lot more fun with it.

In terms of connection possibilities it feels like no stone has been unturned. Both MIDI in, out and through ports, as well as a full battery of control voltage connections are available, while the step sequencer will allow you to control other synths connected via MIDI or CV. The amount of features is quite overwhelming, with an arpeggiator, four LFOs with plenty of wave shapes and a seemingly limitless choice of destinations. The useful touch strips from the Prophet 12 have also made a welcome appearance on the Pro 2, making it an ideal performance synth. Modular enthusiasts and those with a host of analogue gear will be able to make the Pro 2 the brain of an impressive analogue nervous system.

It’s difficult to find a synth that directly rivals the Pro 2. It’s just as unique as the Prophet 12, but it’s perhaps Elektron’s Analog Keys that comes closest. Even then, it doesn’t have the expansive sound quality that the Pro 2 manages to achieve, something in no small part to the “superwaves.” Up to three can be added to each of the oscillators at a time, offering the ability to create full-bodied, morphing sounds that rival the sound design capabilities of the Prophet 12, aided by the amount of control over detailed parameters such as the amount of slop, or drift each oscillator can adopt.

It’s these capabilities that make the Pro 2 such an impressive synthesizer. Well designed and solidly built, it’s more than worthy of the attention that its predecessor garnered. However, it’s an expensive instrument, and there are certainly more affordable monosynths on the market that could offer just as much fun for less money. However, it’s about as versatile as a monosynth gets, and at a substantial amount less than Prophet 12, is perhaps the most value you’ll get out of one of Dave Smith’s instruments.