Evolution has left us with some weird junk code over the years; goosebumps which mimic the rising fur of angered animals, ears that some of us can still wiggle, and the perplexingly useless yawn. While it may not be linked directly to the continuation of the human species, being able to sense when the atmosphere in a room changes is one that, inexplicable as it may be, many of us claim to possess. Pinning down the feeling isn’t easy – ask performance artist Marina Abramovic and a local reiki practicioner, and you’ll get two very different answers what affects the energy of a space. Ask a Hardwax employee, and the word “vibes” will likely find its way into the answer. 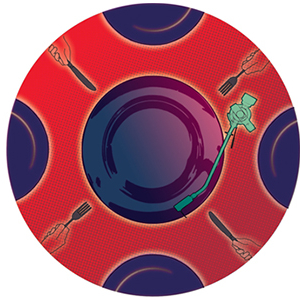 But whatever it is that causes us to intuit a sudden change in atmosphere, Frak and Bassclef’s collaborative EP on Schmorgasbord Records hits the feeling right on the head. The type of recording to stop a conversation in its tracks, these two nightmarish analogue tape deck tracks seem to have channelled into a frequency that all but guarantees your undivided attention. The EP’s creation offers some insight into its spellbinding quality. Both “Bad Trip” and “Strange Gait” were recorded in tandem by Bass Clef’s Ralph Cumbers and supreme Swedish techno experimentalists Frak; multi-tracking the tunes to tape, and then swapping tapes halfway through to finish off each other’s recordings. Frak’s seasoned comfort with experimentalism and Cumber’s enthusiasm for tearing genres apart like Play Doh in the hands of an excited child mean that the results are two slabs of beautiful oratory chaos. Like the slow-motion tableau of an unfolding car crash, the results are complex, alluring and horrifying in equal measure – mostly, you just can’t look away.

“Bad Trip” kicks things off with a foreboding lines of demonic dialogue that feel ripped from a Sega Saturn disc, while a thudding acidic gurgle wriggles its way out from under the track’s thudding kickdrum and angelic choral lines. Full enough twists and turns to be wholly labyrinthine, Cumbers & co. keeps things unpredictable from start to finish: Stuttering ha crash? Check. Pitch shifted horror show vocals? Check. Stomach lurching climax that harnesses all the fevered energy of a live Frak set? Certainly. While “Bad Trip” prefers to throw everything including the kitchen sink at the listener at once, “Strange Gait” prefers to lose itself in slightly tweaked repetitions – chugging along in a deliberately off-kilter rhythm, it tactfully cuts out and introduces new pieces interchangeably, evoking DJ Sotofett remix of Ekman’s “Reform” at a much more frantic, propulsive pace.

The possibility arises of course, that maybe Frak and Bass Clef aren’t tapping into some weird leftover evolutionary reflexes, and instead, simply making some of the most enjoyable, haywire analogue jams this writer has heard all year. Whatever’s going on, Schmorgasbord Records has facilitated a fusion that will make you stop what you’re doing and take notice.