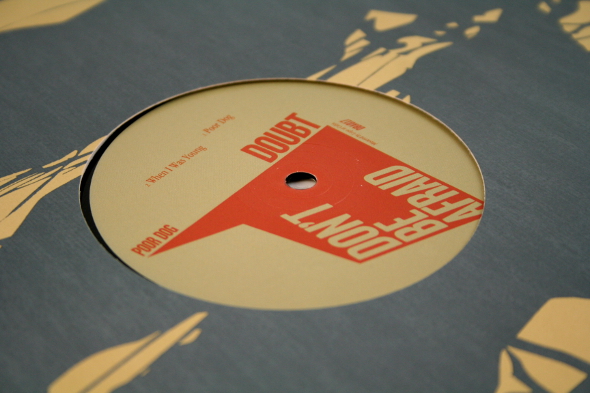 Hailing from Minneapolis and with a spread of aliases and releases behind him, Ian Lehman has only been operating as Doubt for the past twelve months, and after strong salvos of techno delivered on Mistress and Disposable Communities he’s now been snapped up by Don’t Be Afraid to throw down four tracks that see him pushing his sound into more distinctive realms. It makes sense really, as the UK label has always sought to coax out the more playful and intriguing characteristics in its chosen artists, and while the earlier Doubt singles showed promised they were also somewhat in thrall to more typical techno tropes.

On Poor Dog though there is something more exciting and darewesay spiritual at work. The title track especially gives this impression as it comes throbbing to life on a warm mantra of bass synth that gently drifts back and forth in the mix. There is a loping, polyrhythmic quality to the interplay between the various melodic elements, which manage to sit close together in the frequency range without muddying each other, instead summoning up a swirling effect perfect for that electronic psychedelic effect. What makes this track a truly magical experience however is the blast of fresh synth that comes pealing in over the top of the track at the midway point, throwing back the curtains on the low-end gurgle and adding a surprisingly emotive bent to the track. It’s one of those devices with so much power, it can only be deployed sparingly, but it makes it all the sweeter.

“When I Was” is a mechanical affair powered by a rugged rhythm section more in line with the Mistress releases, although there is still plenty of space for deviant production approaches here. The broken machine drones fall off beat to keep things kinky, echoing out into the sparse mix with a captivating malaise, while unannounced breakdowns trigger mini-resets with a fresh set of atmospheric backdrops upon which the kick and hat locomotion can motor. It’s a fine exercise in unsettling minimal techno for the laconic generation, and the quality of the synth sounds makes it an engrossing trip. “Dios” is equally sluggish in its groove, and it works magnificently with it. Here though that techno thrust has been replaced by a bassweight house stomp that demonstrates the convoluted concept of leaden funk perfectly, not least once the gluttonous bassline proper comes in with its domineering ways.

“Frosx” by contrast finishes the EP off on a peppier note, upping the tempo and fixing the component parts to a more taut part of the arrangement. There’s a dubby lilt to the central note throbbing through the track, and there’s plenty of space for the playful sounds that keep Doubt’s work engaging throughout, but this is definitely the most direct of all the jams on offer. That it still manages to be steeped in character says a lot about what Doubt has going for him in the studio.

It’s a curious balance the artist strikes, coming in at an angle that is not exactly revolutionary, but weird enough to stand out. There is evidently some hand-crafted effects processing at work in places, and a keen instinct for nudging things away from the straight and narrow, but this is not purposefully experimental music. Instead it strikes a neat balance between the two, which can be very fertile ground for club music with creative spark.