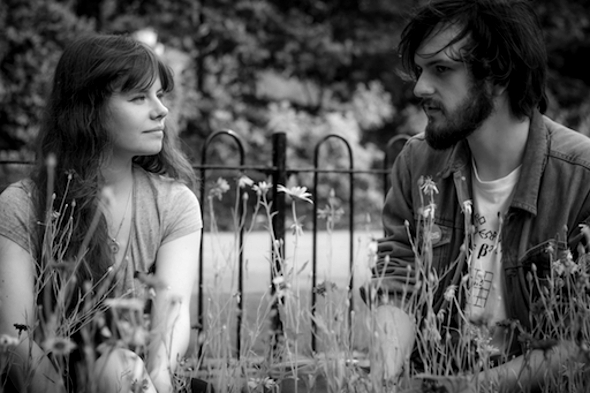 The Glaswegian duo will release their debut album Apéro through the label next month.

Having dipped their toes into the realm of warped techno with the Nouveauree EP from prolific Cleveland-based artist Prostitutes last month, the excellent, pleasantly unpredictable Night School label will next turn their attentions to the fertile music scene in Glasgow. Happy Meals are Suzanne Rodden and Lewis Cook, real-life partners since meeting at high school and much like Optimo Music acts Golden Teacher and Whilst, their music has been made possible by the recording equipment available at The Green Door Studio and the creative freedom the Glasgow hub affords.

Given the bubbling nature of Glasgow’s music scene it’s no surprise to find Cook is involved in various other music projects, being a member of “Scotland’s foremost Hawkwind tribute band” The Cosmic Dead, as well as producing ‘Transcendental Techno-Pop’ solo as Mother Ganga. However, the forthcoming Apéro represents the first recorded statement from Cook and Rodden as Happy Meals. Some six tracks deep, the album finds both contributing to the production which operates as a cosmic backdrop to the Franco-Scottish vocals of Rodden. Given the back story, it’s tempting to compare Happy Meals to a younger Peaking Lights, something that stands up when you listen to album track “Altered Images” which is available to stream below.

Night School will release Apéro by Happy Meals on November 10.