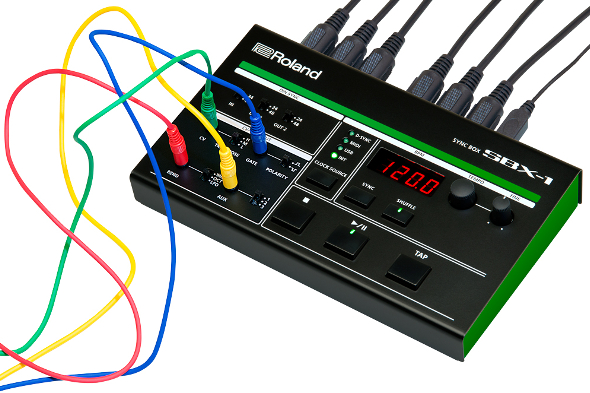 The new device will allow hardware to communicate and synchronize via DIN SYNC, MIDI, USB and CV/Gate connections.

Having recently released its Aira range, which offered contemporary reworks of their classic drum machines and TB-303 alongside a voice transformer and synthesiser, Roland has now offered up details of the next piece of its hardware renaissance. The SBX-1 is described by Roland as a “multi-format sync for computers and instruments”, allowing both analog and digital devices to be connected through DIN SYNC, MIDI, USB and even CV/Gate, with the SBX-1 using its internal clock to act as a master sync as part of a diverse hardware setup.

What this means in real terms is that producers should be able to connect a wide range of old and new gear as part of the same setup without many of the timing issues that can plague more complex setups. The SBX-1’s CV/Gate connections will allow modular and analogue synths without MIDI to be controlled from an external MIDI devices or computer, and the SBX-1 can also create LFO signals which can be output as CV signals from three channels simultaneously. The device also has a shuffle function that can add can add swing to patterns from external sequencers and drum machines, including older devices like the TR-808 and TB-303 that don’t have native shuffle.

Full pricing details and availability are yet to be confirmed, but full specifications can be found at the Roland website.